Marquette hangs on at home to beat Providence 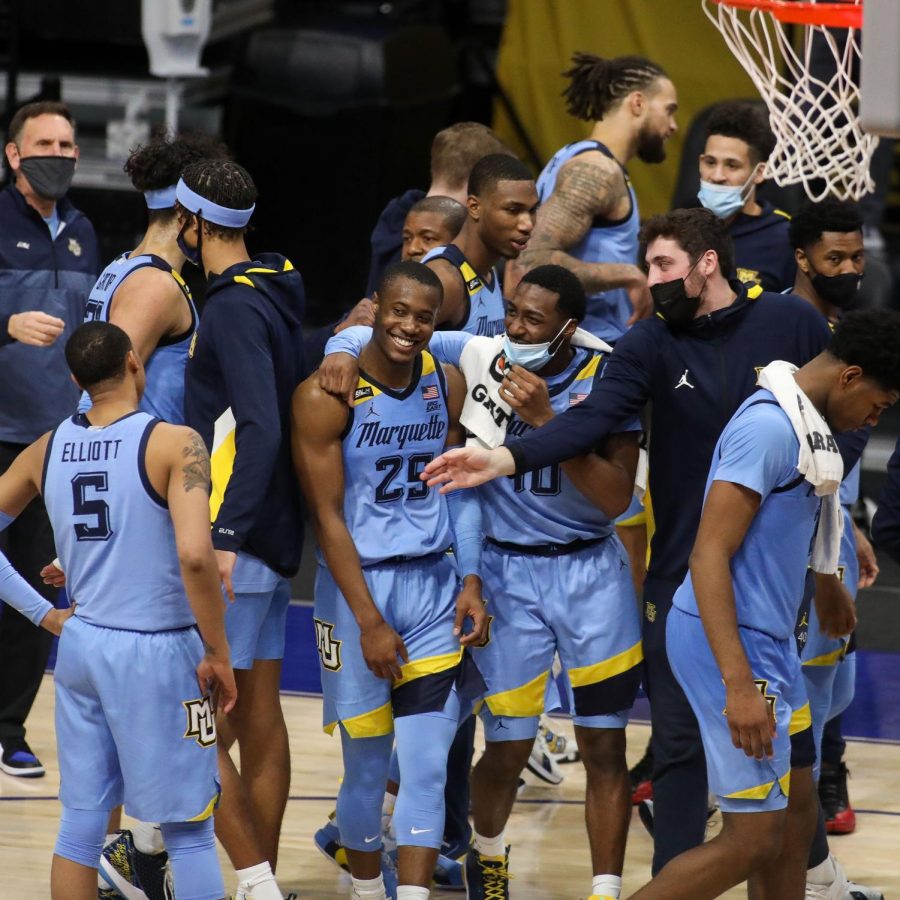 The Marquette Golden Eagles defeated the Providence Friars Tuesday night by a score of 79-69 in a hard-fought, physical matchup.

After surrendering an 18-point lead against the UConn Huskies last week, Marquette once again found themselves with an early advantage against the Friars. MU was able to jump out to a 34-18 lead in the first half, but Providence had no intentions of giving up.

Before the half, the Friars were able to cut the deficit to single digits after an and-one by junior guard A.J. Reeves. At the half, Providence trailed 38-29 behind Reeves and junior guard David Duke, who combined for 17 of the team’s 29 points in the first half.

The Golden Eagles came out cold in the second half, going 2-for-8 from the field to start the final 20 minutes of play. The Friars took advantage, chipping away at the lead and cut the deficit to five points with just under 15 minutes left.

Senior center Nate Watson erupted in the second half. The 6-foot-10 big man scored 14 of his 18 points following the half and led the charge for Providence down low. Watson finished 7-for-8 from the field and also had three rebounds.

After the lead within three and nearly 12 minutes left in regulation, first-year forward Dawson Garcia converted a layup and drew a foul for a chance at the charity stripe. The BIG EAST Preseason Freshman of the Year made the free throw to push the lead back up to six. Garcia finished with a team-high of 20 points to go along with six rebounds and one assist.

“It was the same test that we had last game and this time we knew that we had the answers to it and we were gonna execute,” Garcia said. “Everyone that played just played a great game and I’m just happy to be on this team.”

Providence even came within one after a three from redshirt senior forward Noah Horchler, but the Golden Eagles were able to show composure. Senior forward Jamal Cain drove to the rim and converted a layup to bring the lead back up to three.

Garcia was not the only first-year to make a game-changing play against the Friars. Forward Justin Lewis shifted momentum after blocking Duke at the rim and turned good defense into better offense. The Baltimore native slammed home a dunk following an offensive rebound, and PC was never able to fully recover. Lewis went on to finish with 11 points, six rebounds and three blocks.

Despite erasing a 16-point edge, Providence was never able to take the lead away from Marquette in the second half. While Garcia and Lewis came through with the right plays in the right moments, the Golden Eagles relied on a balanced offensive attack and stifling defense down the stretch. MU finished with five players in double figures. Redshirt senior guard Koby McEwen nearly had a double-double, posting 17 points and eight rebounds in the win.

“No matter what was going on on the offensive end, we wanted to keep our defensive intensity and I thought for the most part we played a good defensive game,” head coach Steve Wojciechowski said. “Overall I thought we put together 40 minutes and that’s something we’ve been asking our team to do.”

Wojciechowski also said he thought his team did a good job with David Duke, who entered the contest averaging 20.2 points per game. Duke had 17 points on the evening and went 5-for-18 from the field.

The Golden Eagles improve to 7-6 on the season and will head to the East Coast for a matchup with St. John’s on Jan. 16. The game will be telecasted on FS1.