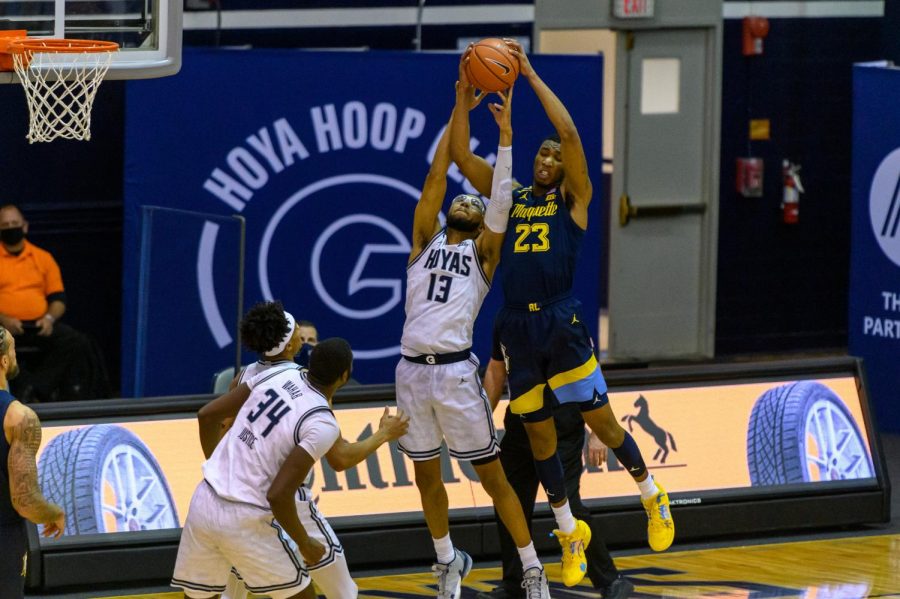 “Our guys showed incredible fight and stick-to-itiveness against a good Georgetown team that played very well,” Marquette head coach Steve Wojciechowski said. “We did not get off the start we wanted to and a lot of that was a result of how well Georgetown was playing. But our kids showed great resolve to stay with it and find ways to win.”

The first half started extremely slow. Both teams’ offenses struggled early and each team had four turnovers apiece in the first four minutes. But then halfway through the first, Georgetown’s offense got going and went on a 16-2 run in seven minutes.

Not much changed for the MU offense for the remainder of the half as Georgetown compiled a 21-5 run over 11:13 and maintained a 25-14 lead at the 3:53 mark. While the Hoyas were shooting 41%, the Golden Eagles were a combined 6-for-25 from the field.

At the half, Georgetown edged Marquette 36-20. Senior forward Jamal Cain paced the Golden Eagles with a team-high five points. The other starters did not contribute much, as redshirt senior guard Koby McEwen scored four points and both Dawson Garcia and D.J. Carton had three. Meanwhile, big man Theo John was scoreless in the first half. MU was shooting 8-for-30 from the field and 2-for-11 from three.

“We know basketball is two halves and we didn’t play to our full potential in the first half, so we had to bring it for another 20 minutes,” Cain said. “It worked for us. We played hard. Guys stepped up and made good plays for us.”

Georgetown shot 45%, scored 19 bench points and 16 points down low. At the half, the Hoyas’ leading scorer was senior guard Jahvon Blair with 12 points.

The second half was a completely different story for the Marquette offense. Even though Georgetown had an 18-point lead at the 19:12 mark, MU clawed its way back slowly but surely. Georgetown shot 9-for-30 in the second and was outscored 44-24 in the final 20 minutes.

MU first went on a 6-0 run early over 2:15 and held Georgetown to a 2:44 scoring drought. But it was in the last eight minutes of the game when the Golden Eagles were firing on all cylinders.

Cain’s layup brought Marquette within 10 points to make it 54-44 with 8:20 remaining. At that point, MU’s defense held Georgetown to a 6-for-18 shooting performance from the field.

Then the Golden Eagles strung together a 13-2 run, played stout defense to hold Georgetown to 1-for-9 shooting and at the 3:19 mark, MU took its first lead since the first half at 57-56. Georgetown recaptured a 60-59 lead with 1:09 remaining.

A Carton basket gave Marquette the 61-60 lead with 43 seconds left after he had gone down earlier with a leg cramp.

“D.J.’s  really good player,” Wojciechowski said. “I believe in him. I trust him. … I knew he was going to come out and make big plays.”

The Golden Eagles shot 51% in the second half and held Georgetown to six points in the last nine minutes of the game.

For Marquette, Cain came up big for the Golden Eagles, scoring a career-high 25 points on 10-for-15 shooting, including a game-clinching corner three.

“I’m proud of Jamal,” Wojciechowski said. “He’s a guy that has gotten better every year at Marquette, has had his ups and downs, but (has) maintained a really good attitude and he’s playing his best basketball at the end, which is what you want every senior to do.”

The only other player to end in double-digit scoring was first-year forward Justin Lewis, who had 10 points on 5-for-18 shooting. Garcia tallied a game-high 13 rebounds, while Carton finished with four assists.

For the Hoyas, Blair led the team with 20 points on 6-for-16 shooting, going 2-for-9 from 3-point range. Sophomore center Qudus Wahab was the only player notching a double-double, posting 13 points and 10 rebounds.

The Golden Eagles (6-5, 2-3 BIG EAST) return to Fiserv Forum as they face a team that rejoined the BIG EAST in July, the University of Connecticut, Tuesday at 8 p.m. Central Standard Time. The game will be telecasted on FS1.

“I know they’re a great team. I’ve actually watched them a few times this year,” Cain said. “We’re just going to prepare like its another big game. We’re going to go back to the drawing boards, find out what they do, their sweet spots and try to adjust to that.”