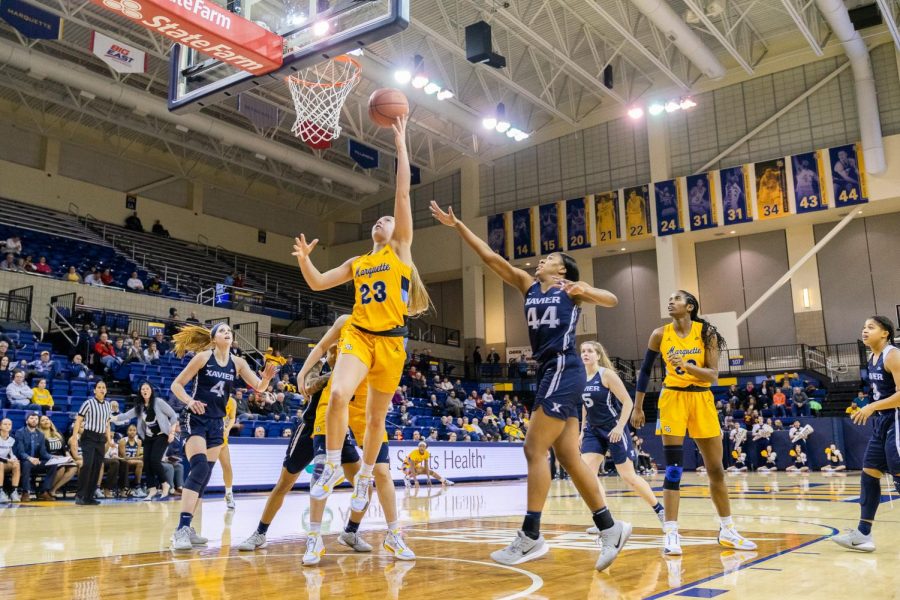 The Marquette women’s basketball team is set to be back in action tomorrow against the Xavier Musketeers after Saturday’s game against Seton Hall was canceled due to a positive COVID-19 test in the Pirates’ program.

The Golden Eagles (5-1, 2-0 BIG EAST) come into Wednesday’s contest at Xavier unbeaten so far in BIG EAST play and look to extend their four-game winn streak.

MU had their hands full last week against St. John’s Red Storm. Their win did not come easy thanks to sophomore guard Leilani Correa. The team standout posted 31 points for the team, but the Golden Eagles prevailed with a 66-62 win at the Al McGuire Center.

Senior guard Selena Lott led the way for Marquette with 21 points on 7-13 shooting from the field, along with five rebounds and five assists.

Redshirt senior forward Lauren Van Kleunen extended her own personal streak, posting 12 points of her own. She has scored double digits in every game so far this season. Sophomore guard Jordan King also helped the Golden Eagles in every category with six points and a career high of eight assists and five steals.

Xavier (2-3,0-1 BIG EAST) comes into Wednesday’s matchup on a two-game losing streak. The Musketeers’ recent 106-59 loss came against University Connecticut in their BIG EAST opener. Xavier has only played one BIG EAST game so far this season due to positive COVID-19 tests postponing matchups against Creighton and DePaul.

Xavier fell behind to No. 3 UConn early Saturday and never recovered as they trailed 38-7 after the first quarter. Redshirt first-year Nia Clark had a team-high 11 points for the Musketeers and has scored double figures in five straight games.

The Musketeers are led in scoring by Clark, who is averaging 14.8 points per game. Senior forward A’riana Gray is not far behind as she averages 13.2 points a game in a well-balanced scoring offense for the Musketeers.

A big thing to pay attention to in Wednesday’s matchup is the amount of turnovers as they have been a big issue for both teams so far. Marquette committed 17 turnovers against St. John’s and Xavier turned the ball over 25 times against UConn. Cleaning up the mistakes on offense will be key for both teams.

Marquette is looking to improve to five wins in a row and Xavier is looking to avoid a three-game losing streak. Tip-off is scheduled for 1 p.m. CST at Cintas Center. The game will be aired on FloHoops/BEDN.
Key Players

Marquette – Force Turnovers. Xavier is averaging 19.4 turnovers a game, including 25 turnovers in their last game against UCONN.
Marquette – Force Xavier to shoot three-pointers. The Musketeers are only shooting 25% from three-point land this season.
Xavier – Force Marquette to turn the ball over. Marquette is averaging 16.7 turnovers a game, including 17 in their last game against St. John’s.
Xavier – Win the rebounding battle. Marquette has won the rebounding battle in 35 of Megan Duffy’s 38 games as head coach.