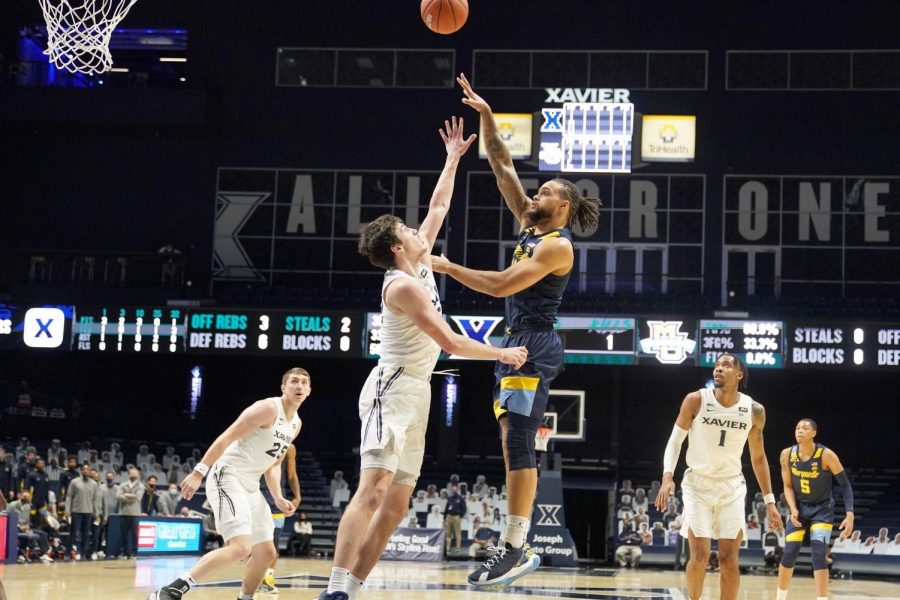 After falling in a close game to Seton Hall at home Thursday, Marquette traveled to Xavier on Sunday afternoon to take on an undefeated Musketeer squad. Xavier remained undefeated after beating Marquette 91-88 in an incredible game.

It was an offensive battle in both halves. Marquette went into the break with a narrow 34-33 lead. Senior guard Paul Scruggs scored 16 of those 33 first half points for Xavier and helped them go on a 12-2 run towards the end of the half to bring the deficit down to one.

Early on, the Golden Eagles put a lot of emphasis down in the paint. First-year forward Dawson Garcia and senior forward Theo John were aggressive, each taking six shot attempts. Garcia led Marquette with eight points at the half.

While the Golden Eagles led most of the first half, it was Xavier who took control for most of the second half.

For a majority of the final 20 minutes of play, Xavier was shooting the ball upwards of 80% from the field. They finished the half at a shooting percentage of 69.2%, scoring 58 points.

Despite being down for most of the first half, Marquette led a comeback towards the end of the second half. First-year forward Justin Lewis hit a tough floater with less than a minute to go. Then, after Xavier made two free throws, redshirt senior guard Koby McEwen hit an extremely tough step-back three as he was fouled.

McEwen then hit the free throw to tie the game at 88. Marquette got exactly what they needed after being down by four.

However, Xavier had time for one more possession. They gave the ball to the hot hand in Scruggs, and after he missed, junior guard Adam Kunkel got the rebound, took a step back, and buried a deep three at the buzzer.

The game-winner put Kunkel up to 22 points on the game, with all but two of those coming in the second half. He finished 6-for-8 from the field and 6-for-6 from the free throw line.

“He kicked our butt,” head coach Steve Wojciechowski said. “Our scouting report was understanding of how good of a shooter he is and we let him get loose time and time again.”

Despite missing his last shot, Scruggs played phenomenally for Xavier. He finished the game with 29 points on 11-for-19 shooting. He also had four rebounds and six assists.

“Scruggs was sensational, he played like the big-time player that he is,” Wojciechowski said. “He’s one of the best guards not only in the BIG EAST but in the entire country, and he played like that today.”

For Marquette, McEwen’s four points on the final possession tied him with Garcia for a team-high 20 points. He also had four assists and two rebounds.

“Our offense was not the issue today,” Wojciechowski said. “When you score 88 points on the road you should have a good chance to win. Our defense really let us down.”

Wojciechowski said the only gripe he had offensively was that they got away from feeding the post frequently like they did in the first half.

“We want to play through the post, and I thought our guys were efficient offensively when we got the ball down there,” Wojciechowski said. “There were moments in the game where I felt we lost sight of that.”

For the game, Marquette shot almost identically to Xavier from the field at 55% compared to 54%, but was outmatched from three-point range, shooting 44% compared to Xavier’s 54%. They also allowed 19 points off 12 turnovers and gave up 18 fast break points while not scoring any of their own.

Marquette also lost the rebound battle 31-26 and gave up 12 offensive rebounds after being a strong defensive rebounding team coming into the day.

“They were just quicker than us, including on the boards,” Wojciechowski said.” “I thought we were very slow foot and slow mind and they made us pay.”

Wojciechowski said that moving forward, his message to his team is going to be focused on the defensive end after their efforts today.

“We’re not going to win in the BIG EAST if we’re letting teams shoot the percentage that Xavier shot,” Wojciechowski said. “We didn’t play with the effort or execution we needed to win, that’s something we need to fix, and we need to fix it soon.”

This story was written by Matt Yeazel. He can be reached at [email protected] or on Twitter @MJYeazel.