Marquette stuns No. 4 Wisconsin at buzzer 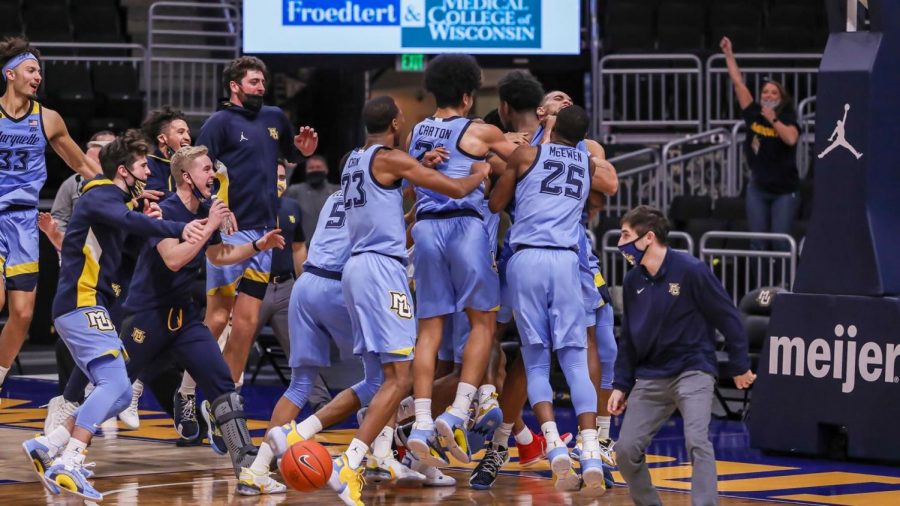 The Marquette men's basketball team celebrates after first-year forward Justin Lewis tipped in the game-winning shot at the buzzer against Wisconsin (Photo courtesy of Marquette Athletics.)

Coming off their first loss of the season to Oklahoma State, Marquette welcomed in its in-state foe Wisconsin into Fiserv Forum on Friday. The Golden Eagles earned their third win of the season in a close one by a score of 67-65.

It was the 127th all-time meeting between the two teams, with this one of course having no fans in the building. Entering the matchup, the series was an even 5-5 in the last 10 years.

However tonight, Wisconsin came in as the No. 4 team in the country and as the favorites to win.

The first half was very low-scoring, but ultimately went in favor of the Golden Eagles. Wisconsin shot just 35% from the field and had 11 personal fouls, forcing senior forward Nate Reuvers, redshirt senior forward Micah Potter and senior guard Brad Davison to miss a good portion of time in the half.

Marquette went into the break with a 35-30 lead. The Badgers went on an 8-0 run and looked to be getting some momentum going into the half, but Marquette then matched it with an 8-0 run of their own to end the period.

In the second half, there was more tight, competitive basketball and neither team was able to put it away until the end. In fact, it took until the final buzzer to decide this one.

It felt like Marquette led for a majority of the second half, but they never had a lead larger than five. One thing remained constant throughout both the game and the half, though: fouls.

Both teams had 11 fouls in the second half, putting each other in the double bonus with plenty of time left to play. The Badgers shot 12-for-15 from the line, with Marquette shooting 7-for-11 following the break.

Believe it or not, one of those misses is what won the game for the Golden Eagles. After a clutch step-back jumper from Wisconsin redshirt senior guard D’Mitrik Trice, sophomore guard D.J. Carton took the ball down the floor for Marquette and drew a foul with 00.9 left on the clock.

He sunk the first free throw to tie the game, but was short on the second one. First-year forward Justin Lewis then tipped the ball in at the buzzer and proceeded to be swarmed by his teammates after winning them the game against the No. 4 team in the country.

“I wanted to go home,” Lewis said. “I knew I might have the opportunity to get a tip-in and I crashed in on the board.”

“To have the mindset of playing through the horn and to anticipate a miss and be ready to make a play is incredible for any player, especially a freshman,” Wojciechowski said.

Lewis led the Golden Eagles with 18 points off the bench, including five rebounds and two blocks. He was one of three scorers in double-digits along with senior forward Jamal Cain and Carton, who had 12 points and 10 points respectively.

Carton got his first start of the season for the Golden Eagles and was trusted with the ball in the final possession to try and win the game.

“I’m getting more comfortable and learning how to control this team,” Carton said. “It’s a role that I can fulfill when I put the work in, and the coach that trust put in me tonight was huge. Tonight was a good night but I got a lot to improve on.”

First-year forward Dawson Garcia scored seven points and grabbed eight rebounds, with senior forward Theo John having just four points and two rebounds. John did have a big and-one score in the second half and ultimately the Garcia-John duo limited the Wisconsin frontcourt duo of Reuvers and Potter.

For Wisconsin, Trice was the standout, posting 17 points, six rebounds and two assists. He would have been the hero tonight after the shot he hit late, but the attempt to draw a charge on Carton was unsuccessful.

This Wisconsin team brought back almost their entire unit from a co-Big Ten championship season a year ago, with Marquette losing their top seniors in Markus Howard and Sacar Anim. However, Wojciechowski’s team stayed poised down the stretch in a very tight game.

“You’re not going to blow a team as good as Wisconsin out, it’s going to come down to those last possessions,” Wojciechowski said. “Our guys showed great poise throughout, regardless of the highs and lows they showed confidence in each other.”

Compared to the matchup between these teams last year, Wisconsin did add Micah Potter and Jonathan Davis. The first-year Davis scored 12 points and Potter scored nine, but was surprisingly not on the floor for the last few minutes of the game.

This is the first time Marquette has defeated an AP top five team in the country since 2017, when they upset No. 1 Villanova. When looking at Marquette’s schedule and the early opponents they have, this win is huge for the Golden Eagles.

“It’s a really good win against an outstanding program,” Wojciechowski said. “We’re an evolving team, and we’re counting on a lot of young guys to step up and tonight they did, but we have a lot of work to do to get to where we want to be.”