Greta Van Fleet and the Age of Machine 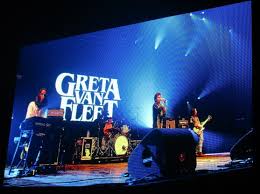 Rock band Greta Van Fleet just released their latest single "Age of Machine", which will also be on their upcoming album "Battle at the Garden's Gate" which will be released April 16, 2021.

Rock band Greta Van Fleet released their latest single “Age of Machine” earlier today. This is the band’s first release since their single “My Way, Soon” this October. The group also confirmed on Instagram this morning that their album “The Battle at Garden’s Gate” will be released on April 16, 2021.

Greta’s last album “Anthem of the Peaceful Army” was released back in 2018. The long-awaited album is anticipated to take a more spiritual theme than ever before.

“Age of Machine” is nearly seven minutes long, and starts slowly with guitar instrumentals and echoes of lead singer Josh Kiszka’s vocals. The single includes several biblical references as well as hints to a belief in a new God, or religion: “God machine/Malfunctioned as it grew/And the circuits blew/Falling down on you.”

In an interview with Rolling Stone, Kiszka told the interviewer he got the inspiration for the song while “watching an ice cube fall and rise in his drink … the movements reminded him of his favorite philosopher, Alan Watts.”.

The interview can be found here: https://www.rollingstone.com/music/music-features/greta-van-fleet-new-album-interview-1097639

Alan Watts was an early 20th-century philosopher that focused on familiarizing the Western culture with Eastern philosophies such as Buddhism and Taoism. Evidently, Watts primarily wrote about achieving peace and tranquility in life, as well as finding inner spirituality.

Kiszka also said in the interview with Rolling Stones that the single is about “Self-liberation, or this idea of letting go or transcending. Is there an afterlife? I think I would rather cease to exist.”

Greta Van Fleet consists of Josh, Jake, and Sam Kiszka as well as their drummer Danny Wagner. Josh and Jake are twins, and Sam is their younger brother. The group is often criticized for sounding similar to the rock band Led Zeppelin, but as the years have passed they have grown into their own sound.

The group combines the boldness of rock music with a contrasting peaceful nature in their lyrics and demeanor. “Age of Machine” ends with their spiritual revelations about the World, and themselves. Specifically in the verse: “We need some healing/God knows if you feel defeated/You have been cheated/You have retreated”.

Greta Van Fleet is a band for hippies and rockers, young and old, and everything in between. “Age of Machine” exemplifies their ability to go beyond just sound, and to create meaningful pieces. Additionally, it creates great excitement around their future album.

This story was written by Reese Seberg. She can be reached at reese.seberg@marquette.edu.