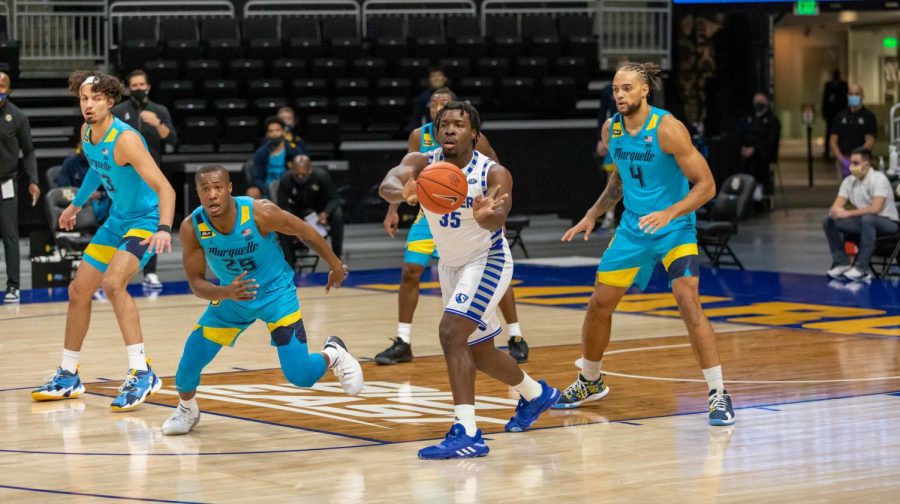 Marquette is preparing to play its first Power Five team of the 2020-21 season, as the team hosts the Oklahoma State Cowboys Tuesday at Fiserv Forum at 6 p.m. Central Standard Time.

Oklahoma State is 2-0 this season after defeating Texas-Arlington by seven Wednesday and Texas Southern by 20 Saturday.

Back in June, the NCAA banned the Cowboys basketball program from playing in the postseason for this season due to an assistant coach accepting thousands of dollars from financial advisors to help steer recruits to the school.

However, the team has started strong this season, and has a lot of young talent on the roster.

The Cowboys are unranked in the AP Poll, but they are ranked 36th in the country by KenPom, where Marquette is ranked 27th after defeating Arkansas-Pine Bluff and Eastern Illinois by wide margins.

When talking about this year’s Oklahoma State team, one must start with the program’s star guard Cade Cunningham.

The 6-foot-8 first-year guard from Arlington was named to the Preseason AP All-America team, being the lone first-year among that group.

Cunningham won the 2020 Naismith High School Player of the Year Trophy, and was the top recruit in the nation according to ESPN, 247Sports, Rival, USA Today and MaxPreps.

In the two games the Cowboys have played, Cunningham has averaged 20.5 points, while also totaling seven assists, two blocks, two steals and 14 rebounds.

Fellow first-year guard Rondel Walker has also made an early impact, scoring 19 points off the bench in Oklahoma State’s last game. He was a four-star recruit.

As for Marquette, its balanced offense has been very productive offensively so far, scoring 99 points and 75 points in their first two games.

First-year forward Dawson Garcia has stood out after putting up 19 points, four rebounds and four assists in the first game, and 16 points and eight rebounds in the second.

Senior guard Koby McEwen has also been scoring efficiently, putting up double-digit performances in both games. Head coach Steve Wojciechowski said the senior trio of McEwen, Jamal Cain and Theo John would be the key to their 2020-21 season.

In addition to that trio and Garcia, sophomore Symir Torrence has been the starting point guard for the Golden Eagles offense. Ohio State transfer D.J. Carton has also gotten a lot of time at that position off the bench, showing flashes of his playmaking ability.

This will be Marquette’s third consecutive home game to start this season, and the team will remain at home for two more games before traveling to play UCLA Dec. 11.

For Marquette, this will be its first true test this season for the Golden Eagles’ new roster without Markus Howard, and a good challenge to prepare them for their following game against their in-state rival Wisconsin, who is currently ranked fourth in the AP Poll Top 25.