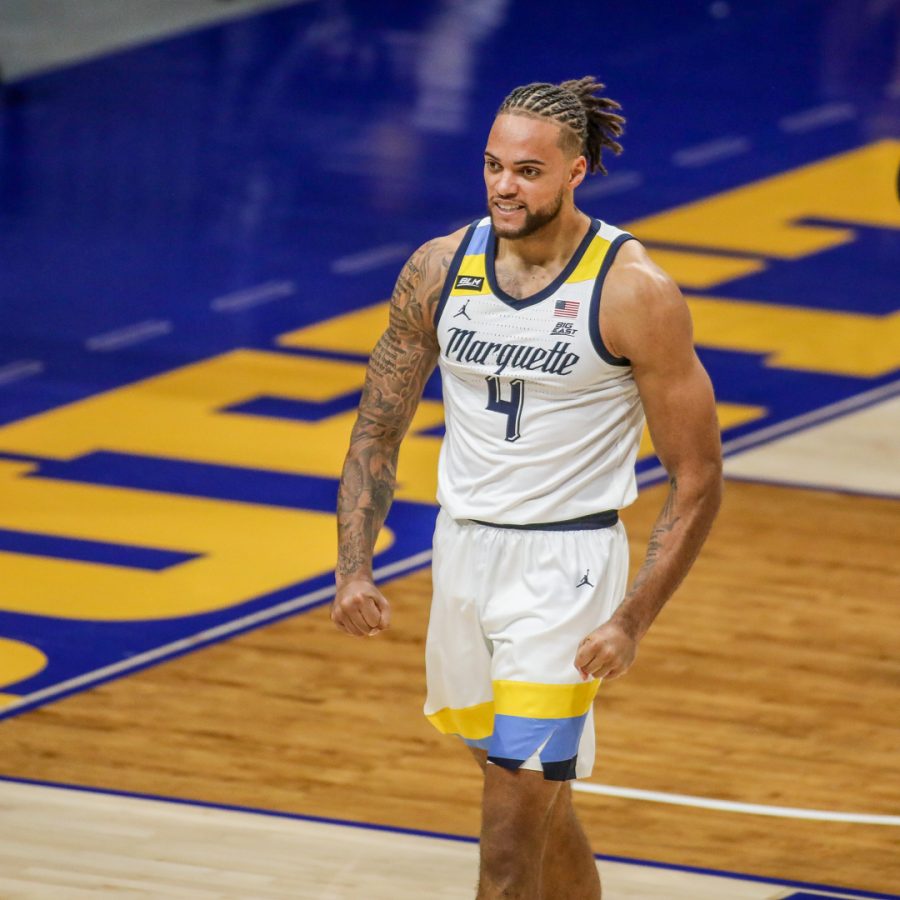 After a long offseason filled with many challenges on and off the court, college basketball made its return across the nation on Wednesday, including the Marquette Golden Eagles hosting Arkansas-Pine Bluff at Fiserv Forum.

The men’s basketball team is the first sport at the university to play a game in the 2020-21 academic year at Marquette, and the first live action in a men’s sport since a tennis match back in March. The Golden Eagles came out on top by a score of 99-57.

Marquette started the game off strong and never looked back. They dropped 50 points in the first half while shooting 56.5% from the field. They also took advantage of their opportunities at the free throw line, sinking 18-of-26 attempts in the half.

In the second half it was more of the same, with Marquette continuing to lock down the Golden Lions defensively. They held Pine Bluff to just 27% shooting from the field and 3-for-20 from beyond the arc on the night.

Marquette head coach Steve Wojciechowski took the opportunity to get a lot of different players on the court in the first game of the year, as 10 different Golden Eagles put points on the board.

Of that group, Garcia shined, as he put up a game-high 19 points, adding four rebounds, four assists and a block. The five-star recruit out of Minnesota was given the start tonight in his first collegiate game.

“Let me tell you something, that boy a bucket,” senior forward Theo John said. “He proved himself tonight and I’m excited to see what he does in future games.”

Wojciechowski said he considers Garcia to be someone that is not limited to one position.

“Dawson’s a really good basketball player,” Wojciechowski said. “He’s got great size, but he can do a lot of things on the floor. His passing tonight was exceptional, and his versatility offensively is something this team is going to need.”

The seniors also played a key role, as John dropped a double-double with 13 points, 12 rebounds and he got back to what he does best, with a game-high five blocks. Notably, John shot 9-for-10 from the free throw line as well.

“Those three seniors and their consistency may be the biggest key to our season,” Wojciechowski said. “With the young guys that we have who can be really good players, they need somebody on a daily basis where you know what to expect all the time.”

Other contributors on the night included Symir Torrence who had two made three-pointers, three assists and seven rebounds, as well as Justin Lewis and Greg Elliott, who each put up 10 points.

As for the transfers, Carton had three points with three steals and a block on the defensive end. Perez made both of the shots he took from the field and finished with six points and an assist.

Wojciechowski said that he played 10 players tonight because he wanted to give everyone a chance to get out there and “let go of all the angst that has been stored over the last number of months.” He said he is not sure if he will play 10 guys every game.

“Top to bottom our roster is full of guys who can put the ball in the hole and play defense at a high level,” John said. “It’s going to be a fun year.”

Next up for Marquette will be Eastern Illinois on Friday night at 6:00 p.m. Central Standard Time. Eastern Illinois lost by 10 points to Wisconsin this evening in Madison. The game can be seen on FS2.