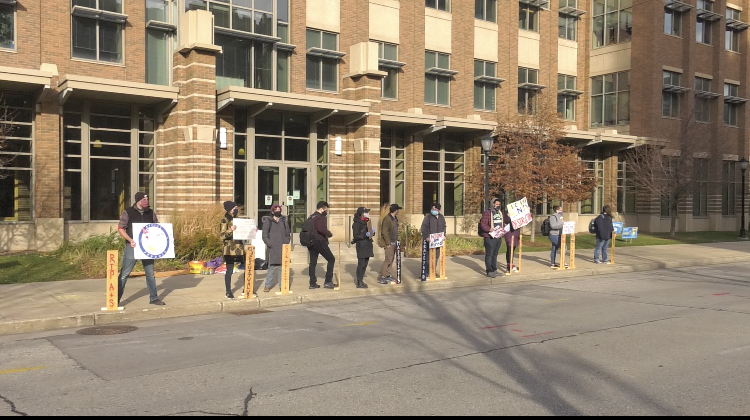 Students and faculty protested Marquette’s proposed budget cuts that would potentially lay off hundreds of non-tenure professors and staff. The protest was held outside of Zilber Hall Nov. 18.

Riley Ellison, a sophomore in the College of Arts & Sciences, explained the importance of why she attended the protest.

“Marquette is choosing cash over integrity,” Ellison said. “They are putting a price tag over different majors and colleges.”

Devon Wiensch, junior in the College of Communication, said they attended the protest to show support to faculty and staff.

“The cuts are going to endanger the well-beings and the lives of faculty and staff,” Wiensch said.

Wiensch added that Marquette is putting income first rather than their faculty and staff.

“While that is not uncommon in universities, especially in the U.S, for a Jesuit university that thrives on “cura personalis” and “loving the whole person”, they really don’t care about their students or faculty,” Wiensch said.

Stephen Beall, professor of Latin and Greek, said that he is showing support to Brook McArdle, who was previously charged with two student conduct violations at a prior budget cut protest.

“I am concerned about the cuts to the humanities and also Brook McArdle is a student of mine,” Beall said.

Beall added that Marquette has not been transparent enough with the community about how they are preceding with the budget cuts.

“They haven’t made a convincing case on how the shortfall occurred, which we need to know more about,” Beall said. “We are not convinced that the approach they are taking is the right one. The way they have been dealing with the faculty is essentially to bully them and now they’re persecuting a student who challenged their authority.”

Ellison said that there are other solutions in regards to Marquette’s budget cuts, rather than laying off faculty and staff.

“Marquette is forgetting that some of their best assets at the school are the professors and how they interact with students,” Ellison said. “I think that they are tasking a rash step in a direction that doesn’t have to happen. There’s other things they can do before making this steep decision.”

Wiensch said the faculty within their major ultimately made them transfer to Marquette their sophomore year.

“Theatre is my passion, but mostly it’s the people you get to work with,” Wiensch said. “Specifically, in the theatre department, everyone knows everyone. You get to work one on one with all your professors, who are pretty much experts in their field.”

This story was written by Natalija Milesunic. She can be reached at natalija.milesunic@marquette.edu.