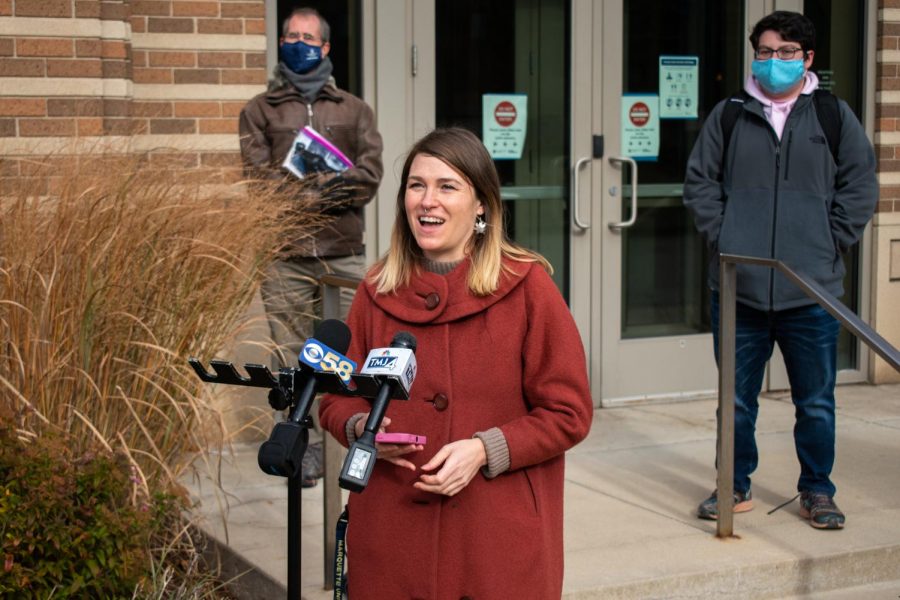 Brooke McArdle, a senior in the College of Arts & Sciences, was charged with two student conduct violations for organizing a sit-in at Zilber Hall Oct. 21. The sit-in was in opposition to the university’s proposed budget cuts and layoffs.

These violations were for not presenting university identification when asked and violating the university’s demonstration policy.

McArdle faces a punishment of a seven-page paper on how to fix the university’s demonstration policy.

“There are students that break laws, governmental laws, not just university rules. They have lesser punishments then that,” McArdle said.

McArdle expressed her frustration with the given punishment and described its unfairness.

“Writing should never be a punishment in the Jesuit viewpoint,” McArdle said. “And to have me do their research for them, while I’m trying to graduate, do finals and write my thesis, is just not my job.”

Brittany Pladek, an assistant professor of English,  has been attended the protests and said she is appalled at the way Marquette is treating McArdle.

“Charging Brooke with two student conduct violations was entirely unjustified,” Pladek said in an email. “These charges are an insult to everything Marquette claims to stand for. It’s especially insulting that as part of her punishment, Brooke has been asked to write a seven-page paper comparing MU’s demonstration policy to the policies at other universities and make recommendations.”

Vivian Walburn, senior in the College of Arts & Sciences, attended multiple protests and explained that McArdle is fighting for faculty because of her love for Marquette.

“She is a leader and exemplifies cura personalis because she searches for truth, fights for justice and raises up people’s voices,” Walburn said in an email.

McArdle questioned why she was the only one being targeted, despite the many other protests held previously.

“They are violating precedent because they didn’t do this to any other student, or student groups that have demonstrated at Zilber in the past,” McArdle said. “That was my whole argument, which was why me?”

Walburn added that the protests organized by McArdle were peaceful and safe.

“People sat apart, masks (were) required, and students did not fill Zilber over capacity,” Walburn said in an email. “The demonstration did not impede or disrupt any business and all doors were accessible.”

During the protests, the Marquette administration made numerous threats against students, one of which included asking for students’ IDs.

“They stated that students were violating student conducts,” Walburn said in an email. “When students asked which part of the policy they were violating, the administration could not give an answer.”

Pladek mentioned that there have been other attempts to get the message across to the Marquette administration as well.

“Brooke’s message isn’t new: faculty have been saying the same thing for months now,” Pladek said in an email. “We have also proposed a suite of alternatives to firings and program closures, including university-wide furloughs, real estate sales, and using the endowment to take out low-interest loans.”

Walburn said that Marquette administrators does not want to hear any sort of criticism that might alter their image to the public.

“The way they have treated students who are calling for change in the name of the values that Marquette touts, clearly shows where they stand,” Walburn said in an email.

“The plans administrators have offered us, even the numbers they have used to justify their decisions, have changed several times, and they seem disturbingly unable to separate short-term strategies for managing our COVID-19 shortfall from long-term financial reorganizations of the entire university,” Pladek said in an email.

Pladek said McArdle’s efforts are not unnoticed and she is making a difference within the Marquette community.

“Brooke was drawing attention to the lack of transparency and shared governance in this budget process,” Pladek said in an email. “She was also standing up to protect a version of Marquette that the current plans for budget cuts will change forever—for the worse. She was doing what our upper administrators should have been doing all along, and they punished her for it.”