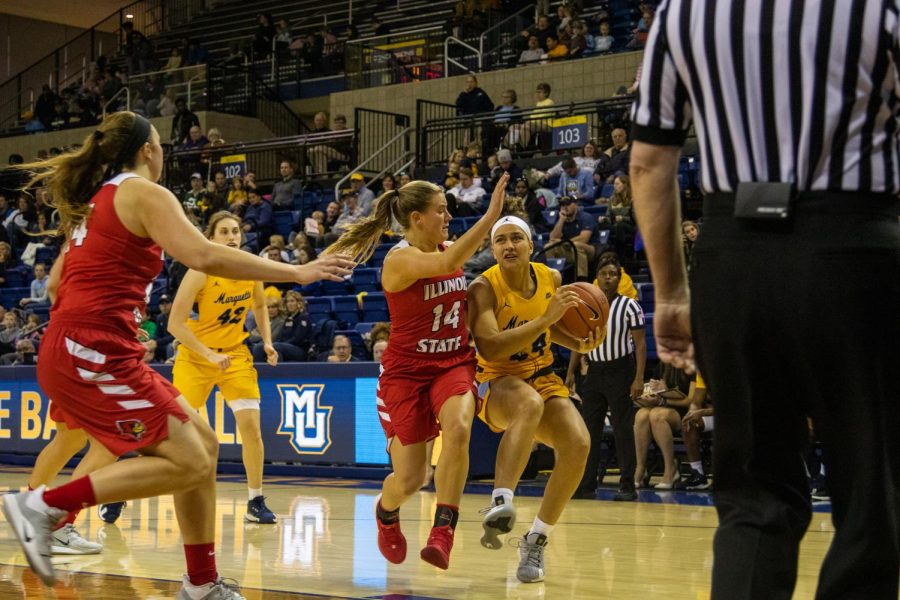 Selena Lott (24) looks to score in a game against Illinois State last season.

Last year, the Marquette women’s basketball team was very young and included six first-year players. They were the underdogs of the conference and projected to finish ninth in the BIG EAST preseason rankings.

That team ended up turning many heads, as the Golden Eagles finished second in the BIG EAST in the regular season, earning a berth to the NCAA Women’s Basketball Tournament before the COVID-19 pandemic abruptly ended the season.

Similar to last season, this year’s Marquette women’s basketball team is led by two veterans, senior guard Selena Lott and redshirt senior forward Lauren Van Kleunen, along with a supporting cast of mostly underclassmen. However, this year, the Golden Eagles are projected to finish near the top of the standings — only behind UConn, who are back in the BIG EAST for the first time since 2013, and DePaul, who have topped the BIG EAST three years in a row.

Although given more respect this year, second-year women’s basketball head coach Megan Duffy said her team still has the “underdog mentality” coming into the season.

“I feel like everyone has to have an underdog mentality this year,” Duffy said Nov. 12 in a Zoom press conference. “There’s a lot we cannot control, but I appreciate how our team in this early part of the season has handled everything, the adversity, the challenges, the pivoting.”

With Van Kleunen and Lott being the only seniors on the team, they said they will look to take on heavy leadership roles on the court and in the locker room.

“I just try to lead by example or lead by my voice,” Van Kleunen said Nov. 12 in a Zoom press conference. “One of the big things on our team is that anyone can be a leader. It doesn’t matter your age or your class, but it’s one of the things we pride the most about our team.”

This season the women’s basketball team brought in four first-year players and six second-year players returned from last year’s team, meaning 10 out of the 13 players on this year’s roster have less than two years of collegiate experience.

“I sometimes forget how young we are,” Duffy said. “There’s still some learning curves with the grind of a college season and then you throw in what we’re going through now, but it will test our team. All I can say is that it looks extremely different and we’re doing it with a lot of underclassmen so we’re going to do our best to manage it.”

With the team consisting of mostly underclassmen, Duffy had to rely on many new faces last season, including then-first-year guard Jordan King. In King’s first season with the program, she started all 32 games for the Golden Eagles and averaged 8.1 points per game, 3.4 rebounds per game, and 3.2 assists per game. Going into her sophomore season for Marquette, King will look to have an expanded role on and off the court this season, helping her new teammates get adjusted to college basketball.

“It’s really important to keep an open mindset and being able to learn, and be willing to be coachable,” King said. “One of the biggest things to being a successful player is taking everything people are trying to teach you and that’s what I’ve been trying to help do with the freshman this year.”

Sophomore forward Camryn Taylor is another underclassman who is poised to impact the Golden Eagles’ performance this season. Last season, the first-year saw 31 games of action while averaging 9.3 points per game, 3.8 rebounds per game, and 0.7 assists per game. Coach Duffy believes both King and Taylor are set to make strides from year one to year two with the program.

“Jordan and Camryn have been awesome moving from year one to year two,” Duffy said. “They had such a steadiness about them as freshmen that gave me a lot of confidence in them to put them on the floor and crucial minutes. (Their games) have definitely improved, no doubt, but just their presence in a way they’re walking around is definitely different from freshman year.”