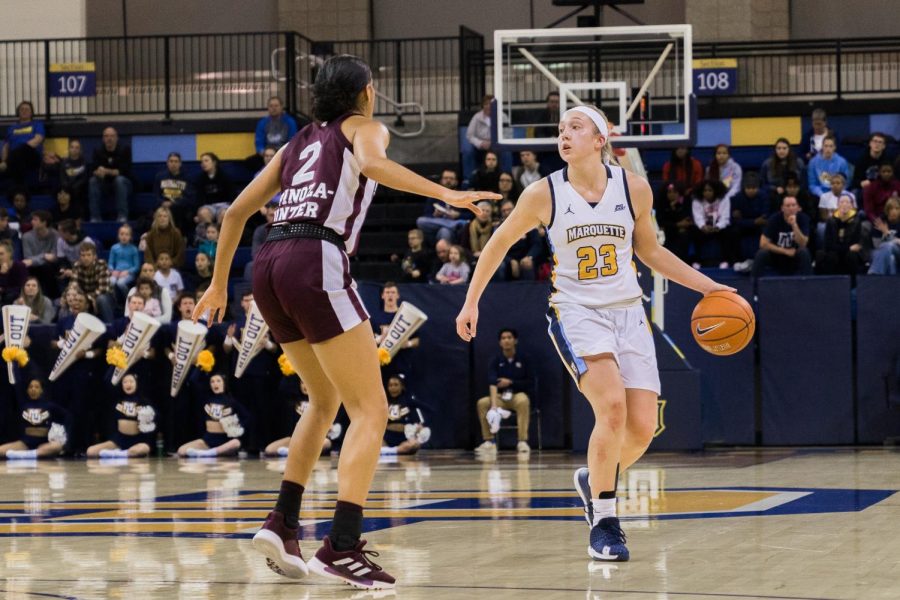 For many student-athletes, the first season at the collegiate level consists of feeling things out and soaking up as much information about their new team as possible.

“Last year was a great learning experience for me in several ways. Just day in and day out, there was something I learned each day,” King said. “I can see that translating already in practices this year, so I’m very excited to see how my one year of experience is already going to make an impact on the second year.”

King moving from her traditional position of wing to point guard came as no surprise to King’s high school coach, Randy Weibel.

“In high school, we needed her to score and that’s why we played her on the wing,” Weibel said. “She would have been by far the best point guard we had in high school but Jordan is, and it probably sounds cliche, but Jordan will do whatever it takes to win.”

During her four years under Weibel at Hononegah High School in Rockton, Illinois, King helped lead her team to two conference titles and three regional titles, and finished as the NIC-10 Conference all-time leading scorer.

Weibel said King’s selflessness helped her have the willingness to move to point guard for the Golden Eagles.

“It was just easy to coach her,” Weibel said. “She’ll do whatever coaches ask her to do and it’s not an act or ‘look at me’ thing. She’s about the team and that’s it. “

As a former point guard herself, Marquette women’s basketball head coach Megan Duffy liked what she saw out of King in her first season.

“I made her the point guard as a freshman, trying to run the show and all that comes with it,” Duffy said. “There were definitely some challenges but I thought overall she had a heck of a first year.”

Duffy told the Marquette Wire last October that King’s experiences prior to joining the Golden Eagles showed her potential for what was to come.

“She had a tremendous high school career and also did it on a national scene on the Nike circuit,” Duffy said. “She is up there as one of the next upcoming stars in the food chain.”

The Rockton, Illinois native finished second on the team last season and eighth in the BIG EAST in assists per game, with 3.2.

Weibel mentioned that in the five or six games where he watched his former player in person, he was most impressed with how comfortable she looked out on the court.

“She wasn’t in a ‘wow’ of anything, any situation or any team that she played. She just went out and played,” Weibel said. “She’s confident enough in her abilities that she wasn’t overwhelmed.”

DePaul women’s basketball head coach Doug Bruno said King’s versatility stood out to him whenever his squad took on Marquette.

“Jordan King is an excellent basketball player who has backcourt versatility,” Bruno said in a statement via email.  “She can play lead guard or scoring guard which makes her very difficult to defend.”

Bruno said two of her main skills include her three-point shooting and facilitating the ball.

“She is a great three-point shooter to go along with high-level vision handles as a talented facilitator — and she can get to the rim,” Bruno said.

King said she learned from all her teammates last year, but one in particular, now-senior guard Selena Lott, served as a major role in her early success and growth.

“One of the things that I learned, and a lot of the younger players can learn, is her competitiveness,” King said. “Something that’s super important in college basketball is being competitive day in and day out, with every drill, every game.”

For Lott, keeping King positive at all times is her objective.

“Jordan knows that she’s one of the best players in the league. I always tell her, you can have a bad day but you can’t fold whenever you want,” Lott said. “I think just always trying to bring her up and having that off-the-court chemistry helps on the court.”

Following Marquette’s 88-74 loss to DePaul in the BIG EAST Title Game and the NCAA Tournament being canceled due to COVID-19, King began looking ahead to her sophomore season.

King said when restrictions eased up in Illinois, she was able to start training.

“Around July, I was able to get in with my trainer and just lock back into my game and get that confidence back with my shot, my ball-handling,” King said.

King said it was important to get back into the gym because taking months off for a sport like basketball is hard.

“It was just really important that once we had the resources that are available, just to lock back in and get refocused and head into this season with a positive mindset,” King said.

Redshirt senior forward Lauren Van Kleunen said she has kept it simple with advice for King as she heads into her second year with the team.

“One of the big things I always tell her is to keep her confidence. She honestly, with the amount she played, in my eyes played almost like a veteran,” Van Kleunen said. “Just stay with that confidence and using that voice as a leader I think is huge because she knows all the right things and does the right things. I think that’s just my big thing to her, to keep leading by example and lead with that voice.”

With exactly eight days until the official start date of the college basketball season, Duffy said she can see differences in her young guard, specifically with the confidence in her scoring ability.

“Her shooting percentage and numbers at practice are significantly higher and I think that’s a little bit of just settling into our system and our style,” Duffy said. “We’ve also moved her off the ball a little bit so we’ll see her play, obviously, still at some point but go over to that wing spot where we can get her out in transition and give her just different opportunities to score.”

Despite the COVID-19 pandemic altering the traditional game atmosphere, with no fans allowed for the remainder of 2020, King says opening day will not feel different.

“It’s the same feeling and all you have to focus on is we play soon,” King said. “It’s still the same excitement, obviously it’s under different circumstances, but when games hit, we’ll be ready and we’ll be excited to play.”