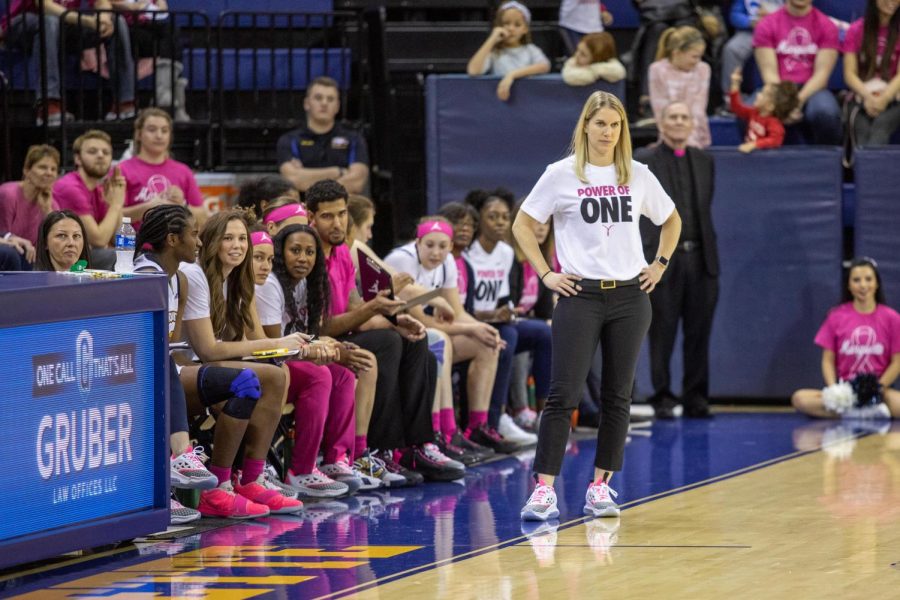 Megan Duffy coaches from the sidelines in Marquette's game against Butler last season at the Al McGuire Center.

“We couldn’t be more excited to bring two great additions to our Marquette family, in Kendra and Makiyah,” Duffy said in a statement. “Fans are going to love their versatility and competitiveness on the court.”

Gillispie, an Oklahoma native, ranks as the No. 58 player in her class by ESPN HoopGurlz Recruiting Rankings Top 100. The 6-foot-2 forward is ranked as the No. 9 player at her position per ESPN.

Gillispie has been successful prior to committing to MU.

During her sophomore season in 2019 at Norman High School, Williams led her team to a state title while averaging 20.8 points, 13.9 rebounds and three blocks per game. Last season at Harding Charter Prep, she helped guide her team to a 22-8 record and the program’s deepest postseason run in history.

“Kendra Gillespie is an interesting player with what she can do,” Duffy said Nov. 12 in a Zoom press conference. “She can be a flat out bruiser inside, then you can see around the perimeter where she’s a terrific passer. She’s going to be great off of our pick-and-roll game and she can shoot the three.”

At Trinity High School in River Forest, Illinois, Williams averaged 20.2 points, 8.0 rebounds, 2.4 blocks, 2.3 steals and 1.9 assists as a junior. The 6-foot wing ranks as the No. 8 player in the state of Illinois by Prep Hoops.

“Makiyah is an outstanding addition to our program,” Duffy said in a statement. “Her versatility, size and skill set will fit in nicely with our team. She’s going to be able to play multiple positions for us and help the team at both ends of the court. Makiyah is one of the most improved players in the country, and she has worked extremely hard to expand her game on the perimeter.”

Gillispie and Williams will arrive on campus next year and have four years of eligibility.