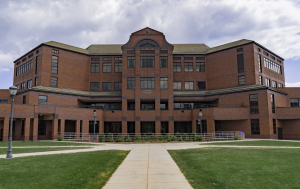 At the Marquette Wire, we knew we needed to do our part and cover the most historic election day the country has ever seen. Faced with persisting racial injustice across the country and a pandemic that has killed hundreds of thousands of Americans, we knew it was important we talk with voters, especially students, to see what issues they cared most about on Election Day. We gathered our crew and headed down to the Alumni Memorial Union, the polling site for Wards 190 and 191, two wards in which students vote most in.

Upon arrival, reporters were greeted with a sign that read, “Due to COVID precautions, the AMU is closed to media on Election Day.”

To not allow the media into the AMU to observe the process of voting is irresponsible. It is the opposite of what Marquette begs to be transparent.

Marquette has been advocating for students to use their voices and vote in this election. Over the course of the last few weeks, Marquette has asked students to engage in respectful political conversations with friends and families who may not share the same views as they do. The university has said they “believe that a key part of the college experience is to become civically engaged and to discover the issues about which you are most passionate.” They even implemented a walking buddy program that allowed for students to safely walk to their voting sites.

To exclude media as the only members to not be allowed into the AMU is absurd. To say it is because of COVID-19 protocols is ridiculous. You cannot refuse media access because of a pandemic while the university continues to hold in-person classes as cases across Wisconsin, and campus, continue to rise. Just this weekend, the university switched from ‘moderate’ to ‘high alert’ level as the campus has seen more than 100 cases in three days. Inside the AMU, there was no limit for the amount of people allowed inside. Students could come and go. People voting could come and go. There were no other limitations for people to stay safe inside the AMU besides social distancing and wearing masks. Only media members were kept out and kept out of the AMU only “on Election Day,” as the sign said.

It is irresponsible to request the media stay out and excuse it because of a pandemic.

University spokesperson Chris Stolarski said media were asked to conduct interviews and stand-ups outside to help mitigate the spread of the coronavirus on campus. Yet, that is not what the sign said. If the university wanted media to do interviews and stand-ups outside, that much could have been transparent to media members, but rather, the university opted to keep media out overall without sharing their requests until they were questioned about their decision.

Additionally, media members are not the only people who could potentially spread the coronavirus. Alluding to that fact through the sign insinuates that only media were the ones who could spread the virus inside the AMU on Election Day.

We understand voter access is the priority, as Stolarski told us. However, the right to observe the process of voting is allowed and cannot be denied. As student journalists, we follow COVID-19 protocol every day. We social distance in our newsroom. We wear masks. We wipe down equipment and computers after use. We would have followed all COVID-19 protocols inside the AMU as we have been doing as students, attending classes, in order to stay safe and mitigate the spread.

While we were later allowed into the AMU after the City of Milwaukee asked Marquette to take down the signs, we should have been allowed in all along.

After speaking with the Milwaukee County elections director, Julietta Henry, and Ray Dall’Osto, a lawyer who practices constitutional rights, they both said the polling place is public, and it’s public work, even though it is on private property.

Dall’Osto told us that the only rule media, and anyone, has to follow at a polling site is to not take pictures of voters before or during voting.

Marquette was wrong in their decision to hang the signs up. They were wrong to explicitly say that media was not allowed into the AMU on Election Day because of COVID-19 protocols.

While Stolarski added that other media members who tried to get into the AMU were respectful regarding their decisions, we were too, but we have to hold the university accountable on one of the most important days in American history.