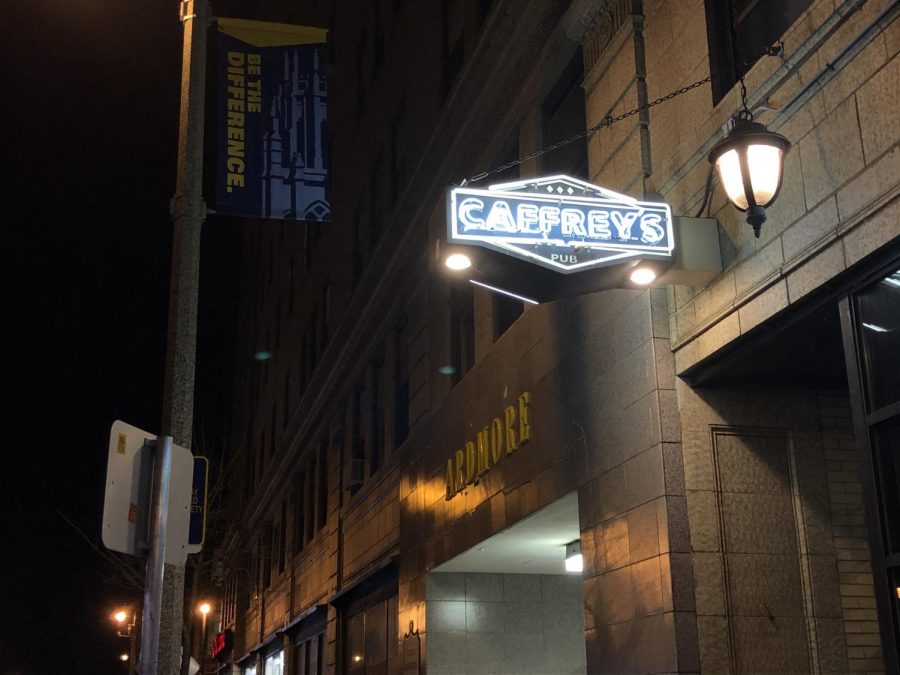 Marquette students have still be attending bars near campus despite COVID-19 concerns.

“I feel like I am in a constant state of fear,” Komal Khatri, a sophomore in the College of Health Sciences, said. “Even when pushing an elevator button, I’m scared that someone who is a carrier touched it and now I have (COVID-19). Thank god for hand sanitizer.”

There were 9 new cases reported yesterday, the first time the number has been in single digits since Nov. 1.

A group of second-year dental school students were also quarantined earlier this week due to potential off-campus exposure. The Marquette Dental Clinic has yet to comment on the outbreak.

The university has also changed its alert level from “moderate” to “high.” This now limits previous in-person gatherings to only meet virtually unless supervised by a staff member.

The Marquette University Police Department will also be increasing its presence in order to monitor off-campus gatherings.

Miranda Hunt, a sophomore in the College of Communication, will have spent up to a month in quarantine in total this year after she’s done with her second two weeks of isolation. The previous happening earlier in this semester. She is now in the ambassador hotel. Hunt said she feels as though the university’s testing is not doing enough.

“We can only get tested if we have symptoms or a known positive contact, that means if I’m indirectly exposed I can’t get a test, which I feel is super dangerous,” Hunt said.

Hunt said because of COVID-19, she doesn’t feel safe in terms of the spread and feels frustrated by the continuation of students going to bars and parties, which doesn’t give her much power to stop the spread if she still needs to go to class. Even when she’s trying her hardest to stop the spread, she still ended up in quarantine.

“It’s like (Marquette) students don’t see this as a real pandemic. The university is being frustrating, yes, but the students have a responsibility in this moment to be as safe as they can,” Hunt said. “I know it’s difficult to avoid hanging out with friends, but there has to be a hard limit to social settings. Hanging out with the same few friends in an apartment is not the same as seeing several groups of people at a bar or party.”

Piper McCaffrey, a junior in the College of Communication, was put into quarantine at the Ambassador Hotel last week. She also expressed her frustrations with the university’s response to the pandemic.

“I feel like Marquette is doing the bare minimum. If they actually cared about minimizing COVID they would’ve made more procedures to stop the spread at the beginning of the school year,” McCaffery said. “It’s upsetting that the university only offers testing if you have symptoms.”

McCaffery said the university should enforce mandatory testing and MUPD should have a stronger hand in shutting down off-campus parties, where most of the spread seems to be happening.

“I’m deeply disgusted with the lack of care and immaturity displayed on campus,” McCaffery said. “I don’t think the whole student body understands the consequences of hosting parties and social gatherings. Not only is the school affected, but the Milwaukee community as well.”

In response to the increasing number of cases in the state of Wisconsin and the United States as a whole, the University of Wisconsin-Madison plans to expand its testing of the campus population.

The plan includes all students and employees who utilize campus spaces to be tested twice a week starting in January.

Ryan Nolan, a sophomore at the UW-Madison, works for isolation housing at the university. His job entails helping students who test positive transition from their normal dorms into designated isolation dorms or hotels off campus.

“As a student, I’m slightly annoyed to see that there’s still a number of cases increasing exponentially on campus,” Nolan said. “But as an employee who sees the numbers every day, I’ve seen first hand that the increase in the frequency of testing can have a significant impact on the number of positive cases because there is less time for a student to have the virus and be spreading it to others without knowing it.”

Nolan said he supports the movement to increase testing as a whole throughout campus and feels as though other universities across the state and country can follow the lead UW-Madison is setting.

“The student population is larger so it’s hard to compare the numbers, but in general I feel like our process is working the way it’s supposed to,” Nolan said. “I think given ample resources, all universities should be testing as frequently as possible.”

According to Madison’s coronavirus dashboard, the university currently performs a little over an average of 1,500 tests per week, while Marquette has an average of less than 100 per week. 2.7% of the student population at Madison who have gotten tested have come back positive over the past seven days, as compared to the 32% positive tests at Marquette.

In terms of testing at Marquette next semester, Vice President of Student Affairs Xavier Cole said that the university is in the process of determining the best course of action. More information will be available after the university is closed after Thanksgiving.

Because of the increased alert level, some professors have been deciding to transition the remaining portion of their in-person classes to fully online. Bryan Rindfleisch, an assistant professor of history, sent in an email to students that they would no longer be meeting in person.

“Frankly, I’m appalled at the extent that this university administration has blamed students … for the massive spike on campus, and nothing else,” Rindfleish said in an email to his early American history class. “It is worrisome, and personally, to protect my newborn girl and my other girl, I know my family will feel much safer away from campus.”

In the past week, there have been 4,157 cases in Milwaukee County, a pattern of increasing cases that is parallel with the spike at Marquette.

“The university is aware of an increase in overall cases on campus and in our neighborhood, which is congruent with increases we are seeing in the state and Milwaukee County,” Chris Stolarski, university spokesperson, said in an email. “We are monitoring the increase in community spread, rather than distinct clusters. Through aggressive contact tracing efforts in coordination with the City of Milwaukee Health Department, the Marquette Medical Clinic is closely monitoring the situation.”

Stolarski said the university continues to encourage all students to be vigilant in making sure they’re following proper health and safety guidelines set in place by the Milwaukee Health Department and the university itself.