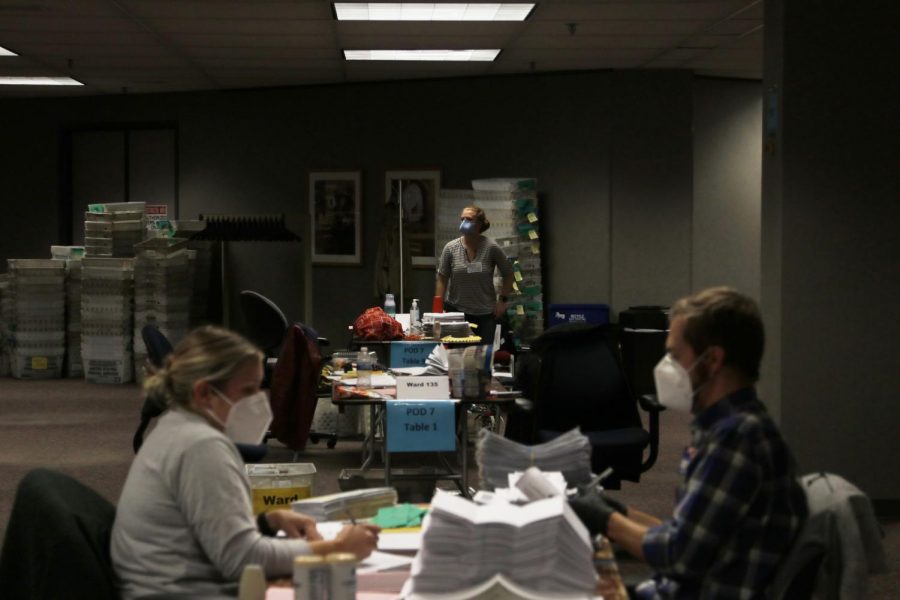 As of 4:00 a.m., a clear presidential winner for the 2020 election was not yet established.

President Donald Trump and former Vice President Joe Biden’s work on their respective campaigns all came to a final culmination Nov. 3, when Americans took to the polls to choose their next president in an election many have called the most important one yet.

As of 4:00 A.M., Joe Biden has a 25 electoral lead over Donald Trump. Experts are calling this election anyone’s race.

In an election year that was overtaken by the COVID-19 pandemic, a disease that has killed over 230,000 Americans and has infected over nine million more, absentee ballots were used by a record estimated 60 million Americans. Trump has called this a “disaster.”

Throughout the night, Donald Trump had led the state of Wisconsin until a surge in the counting of absentee ballots from Milwaukee County catapulted Biden to a near 10,000 vote lead in the dairy state. The turnout in Milwaukee County appears to be around 83%.

Both candidates were projected to take multiple swing states. Florida and Ohio went to Trump, while Arizona and New Hampshire went to Biden.

Some mail-in ballots in the state of Pennsylvania have yet to still be counted, a state that FiveThirtyEight.com has claimed could change the course of this election.

In any election, America is split into red and blue states on major news networks, separating red states and blue states that show a political split that is present in American society.

But adjunct instructor at Marquette Brandon Savage anticipated the divide to be a norm of this election.

“There will always be a strong reaction from the electorate based on any election. In this case, it will be more radical because it’s been encouraged. The idea that a loss equates to a ‘stolen election’ is the theme,” Savage said. “Regardless of the outcome, it will take years to recover from the division.”

“We have a lot we still need to figure out when it comes to rights, liberties, and the role of government,” Savage said. “Things change. We evolve and figure things out as we go … We have that ability to grow, embrace change, and make things better for our collective future.”

At 11:45 p.m., former Vice President Joe Biden stepped out to make a speech with his wife Jill Biden to a crowd in Delaware.

“We feel good about where we are,” Biden said. “We really do.”

Biden said he and voters knew the count was going to take a while, urging the crowd to be patient. He said the election is not over until every vote and ballot is counted.

Biden said he is confident in Arizona, Minnesota, Georgia, Wisconsin and Michigan, and said he and his campaign are feeling good.

“It’s not Donald Trump’s place on who wins the election,” Biden told the crowd.

He then thanked everyone who has worked at the polls or who has counted, and said that he was grateful for his supporters.

“I love how every one of you came out and voted in this election,” he said. “Keep the faith guys, we are going to win this.”

Zoee Arreguin, a sophomore in the College of Communication, watched the election from the basement of Mashuda Hall. She voted in her first presidential election as a citizen of Kenosha, Wisconsin, a county that has been visited by both presidential candidates after protests erupted when a police officer shot Kenosha resident Jacob Blake in the back seven times.

Arreguin said she voted this year because she felt human rights were on the ballot for her.

“I was excited to vote in Wisconsin and especially in Kenosha, I feel like it’s that’s a really influential county,” Arreguin said. “But I’ve definitely been nervous and anxious all this week. The state of this country is just unstable … this election is definitely a huge moment in history.”

Later in the night around 1:30 a.m. at the White House, President Donald Trump thanked the American people for their support.

Trump said he was getting ready for a big celebration, but it was ‘called off.’

“We won states we weren’t expecting to, we didn’t win Florida, we won it by a lot,” Trump said.

Trump continued to say that he won Georgia, North Carolina and had a ‘lot of life left in Arizona.’

“I looked at Michigan and I said ‘woah,'” he said.

Trump said he knew there would be questions once ballots were sent out weeks ago due to voters registering and voting early because of the coronavirus pandemic.

“This is an embarrassment to our country,” Trump said. “Frankly, we did win this election.”

Trump said his goal now is to ensure the integrity of the nation.

“We want the law to be used in a proper manner. We will be going to the Supreme Court,” he said. “We want all voting to stop … to me this is a very sad moment. We want to win this, and we have won.”

It is important to note that presidents do not decide victories of states or the presidency on election night.

Media outlets reacted to Trump’s premature claim, the Associated Press stated they would not claim a victor until one candidate is projected to win 270 electoral votes.

This story was written by Benjamin Wells and Natallie St. Onge, they can be reached at benjamin.wells@marquette.edu and natallie.stonge@marquette.edu.