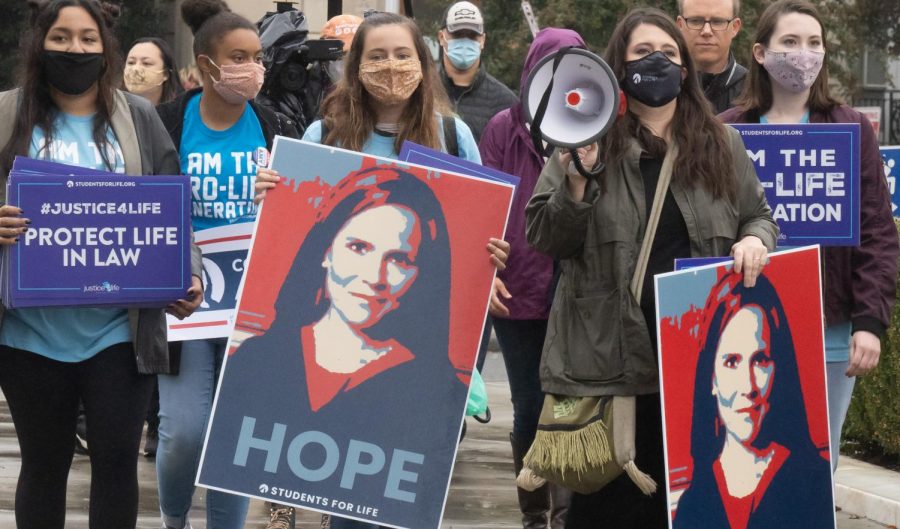 Supporters stand outside the Supreme Court during the judiciary hearing for Amy Coney Barrett's nomination Oct. 12. Photo via Flickr

Amy Coney Barrett’s recent Supreme Court successful nomination and confirmation, which came at a 52-48 vote in support, all of which were Republican senators, is both detrimental and dangerous to the human rights of several demographics, most notably that of the LGBTQ community and women.

Barrett’s Supreme Court confirmation Oct. 26 came after the death of former Supreme Court justice and human and womens rights trailblazer Ruth Bader Ginsburg. After her death, Ginsburg was coined as a “tireless and resolute champion of justice” by Chief Justice John G. Roberts Jr. as well as praised by 2016 Democratic presidential nominee Hillary Clinton for paving the way for several women, including Clinton herself.

Barrett, known for her conservative Catholic beliefs, has a history of using her faith to oppose topics that are typically known to be supported by Democrats, such as abortion, same-sex marriage and other human rights issues.

Moreover, in regards to civil union of LGBTQ couples and the rights of LGBTQ individuals, it is clear that Barrett advocates against members of the community, which is contradictory to Pope Francis’, the head of the Catholic Church, support of a same-sex civil union law, which was shared in the “Franceso” documentary.

Barrett, prior to her two and half years of experience in the 7th Circuit Court of Appeals, served as a trustee on the board of three affiliated private Christian schools. During her time on the board, the schools, located in Indiana, Minnesota and Virginia, effectively barred the admission of children with same-sex parents and the schools made it clear that openly gay and lesbian teachers were not allowed to teach in their schools.

This is not what being a Catholic or Christian means. People should never be discriminated against because of their sexual orientation. It is simply disgusting, wrong  and inequitable that our newest Supreme Court justice has previously discriminated against and unfairly treated members of the LGBTQ community.

Furthermore, Barrett, as well as the other trustees, supported the enrollment agreement of the schools, which state that “the only proper place for human sexual activity is marriage, where marriage is a legal and committed relationship between one man and one woman.”

This highlights the irony of conservative Catholicism, as it seems to be used for political schemes. Catholicism should always be pro-human rights and human lives. Not just one issue over another. It must be an effort that aims to better the lives of all people and demographics. Thomas Reese, S.J., a Jesuit priest and senior analyst for Religion News Service, perfectly summarizes this, explaining that “(c)atholics tend to pick and choose which parts of Catholic teaching have an impact on their political views.” Catholics, instead of picking and choosing which types of human rights they support, must welcome all people, especially if they are underserved and disenfranchised.

Barrett’s recent confirmation to the Supreme Court directly contradicts this value, as she is anti-LGBTQ rights.

As mentioned, there is a difference between the ideals of Ginsburg and those of Barrett. Barrett also differs greatly from Ginsburg in how they perceive and understand what it means to be a woman. Moreover, they have completely different perceptions of what it means to be a woman in a leadership position. Furthermore, they hold different values of what opportunities and support structures women should be given in society.

One aimed at uplifting the voices of women. The other refuses to support a woman’s right to choose.

We know that when women lead, societies thrive. History has proven that when women take charge, things change for the better. From women like Eleanor Roosevelt all the way to young leaders like Greta Thunberg, we see countless examples of women in leadership positions. Supreme Court Justice Ruth Bader Ginsburg is a perfect example of what effective feminist leadership can look like at the highest level in our nation. Her entire career aimed at uplifting and protecting female voices and finding ways to implement them into policies previously created. For example, employers cannot discriminate against employees based on gender or reproductive rights. Both Ginsburg and ACLU Women’s Rights attorney Susan Deller Ross, are credited with helping to pass the Pregnancy Discrimination Act, an amendment to Title VII in 1978 which acknowledges that pregnancy discrimination is unlawful. In 1996, Ginsburg led the ruling decision in the United States v. Virginia Case. The United States v. Virginia is a landmark case in which the Supreme Court of the United States struck down the long-standing male-only admission policy of the Virginia Military Institute in a 7–1 decision.

While we may want to rejoice that another woman will hold a seat on the highest court in the United States, we have to consider Barrett’s values and morals, and she is not the kind of woman who deserves our applause. She has written dissenting opinions against the rights of women. As recently as last year, a three-judge panel blocked an Indiana law that would make it harder for minors to get abortions, she voted to have the trial reheard by the full court.  Not only this, but Barrett wrote a unanimous three-panel judge decision in 2019 that would make it easier for men alleged of sexual assault on college campuses to challenge the accusations against them.

Supporters of Barrett point to her “woman credentials” by stating that she is the mother of seven and being a wife, which is rather misogynistic to suggest that a woman can be defined or limited to motherhood and being a wife.

While it is impressive that she is able to manage raising seven kids and a high-profile career, all of what she believes in aims to dismantle women’s rights that have been fought for over the past century. Her judicial record, which is made of over 100 opinions of hers on important issues, proves that she is not for women. Additionally, when questioned on topics like safe abortion, birth control or fertility treatment during confirmation hearings in October of 2020, Barrett refused to say whether or not she would uphold these policies if elected. This is the kind of silence that speaks louder than words. The kind of silence that we should all fear. If Roe v. Wade is weakened, or worse, overturned, the power to legalize abortion would return to the states, in which some states have trigger bans, which means that would automatically restrict abortion if overturned. Legal abortion access would decline in large regions of the country — like the American South and the Midwest — which would make it harder for women, especially economically disadvantaged women, living in these regions to seek clinics to support them.

But Roe v. Wade is not the only thing at stake. Numerous other rights like civil rights, voting rights, immigrant justice, disability rights, workers’ rights and environmental protection will also be affected by Barrett’s extreme views, which leaves only conservative white males to benefit from Barrett’s appointment.

The most disappointing part is that we have left critical decisions to a justice that cannot remember the five freedoms that are guaranteed by the First Amendment, ironically forgetting the right to protest. One would think that because 2020 has been marked with protests around the world, it would be the most unforgettable. This illustrates the lack of awareness Barrett has to the adversities of many Americans, mostly because she does not have to endure the same struggles. What is also disappointing is that the Girls Scouts of America, an organization that prides itself on women empowerment in young girls, cannot openly support Amy Coney Barrett because she does not embody the spirit of what the organization is said to believe.

The confirmation of Barrett severely affects the future of this nation, as well as the LBGTQ community and women, and it is important to speak out against the nomination being damaging to these lives. It is essential that the citizens of Milwaukee, as well as the students of Marquette University, as Catholics, exercise their right to protest and their right to vote  in all elections, both locally and nationally against this inequitable and dangerous nomination and confirmation.

This story was written by Hope Moses and Max Pickart. They can be reached at hope.moses@marquette.edu and max.pickart@marquette.edu.