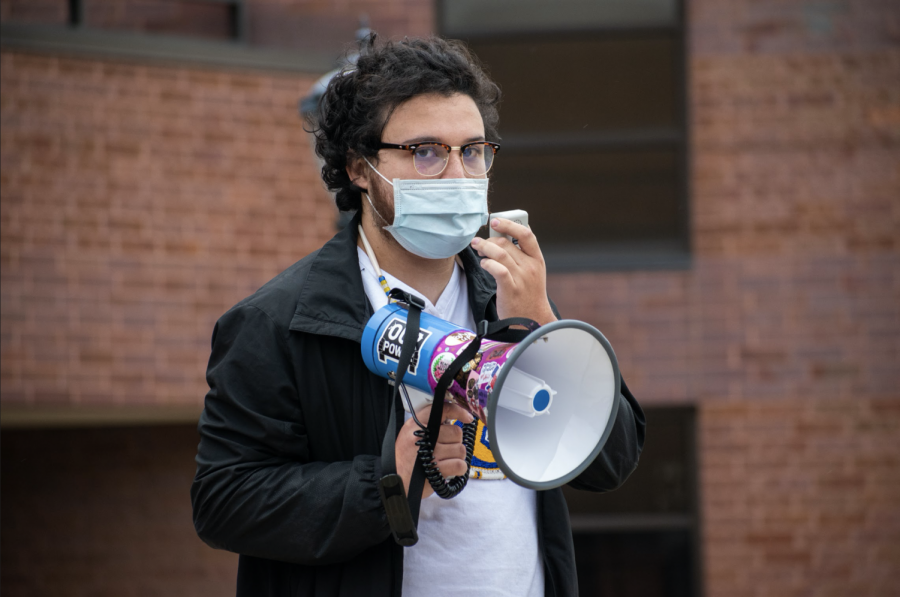 There are 16 undergraduate students who identify as Native American or Indigenous at Marquette University this year. Alex Liberato, a senior in the College of Business Administration, is one of them.

The protesters sat in Zilber for two hours demanding that University President Michael Lovell come down to address these concerns. Instead, the group was met by other members of the administration who said Lovell was not on campus. Liberato was offered time to schedule a meeting with the president.

“We wanted both parties to go comfortable going into (the meeting),” Liberato said. “Once we were in there, I set the tone that everybody understands that we’re all working toward a common goal of making Marquette a better place.”

Liberato said the president agreed with all the demands that the Native American Student Association put forth. These plans that the organization had set forth included the university’s seal be changed, hiring of staff that promotes the race and ethnic studies of Indigenous programs, and providing full-ride scholarships for Indigenous students.

“We used this meeting as a … jumping-off point of further discussions that we want to implement the plans and goals that we have going forward,” Liberato said. “It was the start of a conversation.”

Although the one-hour meeting didn’t make any concrete changes immediately, Liberato felt that there was momentum going forward to work toward permanent change.

Leading up to the meeting, Liberato was instructed that four members of the Marquette community, including students, faculty and staff could attend with him. But at the very last minute, he was informed that faculty and staff members were not allowed.

“It was interesting,” he said. “They had specified clearly that faculty may be present, and then walked that back.”

William Welburn, vice president for inclusive excellence, was present for the meeting and stated that a group of Marquette community members is continuing to work toward a “reimagination” of the university’s seal without removing the identity of Native American people or the university’s identification as a Jesuit institution.

University spokesperson Chris Stolarski said the committee to work on changing the university’s seal was appointed by Lovell earlier this year. So far, no change to the seal has been made

“The committee comprises a broad group of individuals from all areas of campus, including the president of the Native American Student Association and a representative from the Marquette University Council on Native American Affairs, on which the provost also sits,” Stolarski said in an email. “The group and its subcommittee on research have met regularly since September and are already making significant progress toward making the seal a more accurate and inclusive symbol of our university’s history.

Stolarski said university leaders are committed to working with Indigenous students and making them feel welcome within the Marquette community.

“I am very satisfied with the dedication and methodical progress of the group. But we know that this is only the beginning as we address recruitment, retention, and success of Indigenous students at Marquette,” Welburn said.

Welburn said he was disheartened by the decrease of Native American students at universities nationwide But he said that the growth of the Race, Ethnic and Indigenous Studies program at Marquette can help curve the issue.

Despite efforts from the university, Liberato said there is still work to do after a long-time effort of trying to make sure his life is respected on campus. This proves difficult while he tries to be a college student at the same time.

“The thing is that a lot of the problems that we face as Indigenous students here at Marquette are things that we shouldn’t have to come to administration and tell them about,” Liberato said. “It’s hard to justify your existence while simultaneously trying to get through midterms and have a life as well.”

This story was written by Benjamin Wells, he can be reached at [email protected]