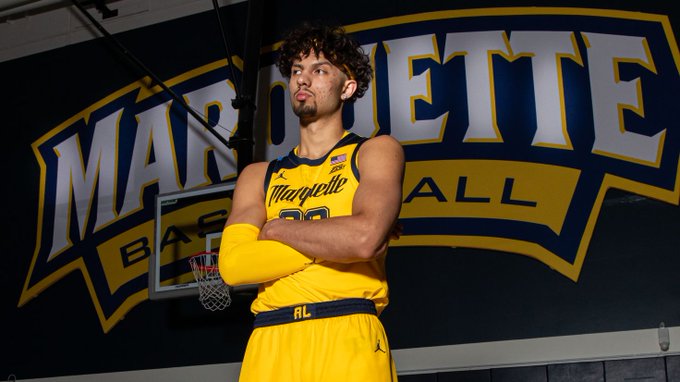 After the departures of guard Markus Howard, guard/forward Sacar Anim, forward Brendan Bailey and center Jayce Johnson, the Marquette men’s basketball team filled those holes on the roster by adding a plethora of talent this offseason.

Sophomore guard D.J. Carton also came to Milwaukee after one season at Ohio State. In his first year of college basketball, Carton averaged 10.4 points, 2.8 rebounds and 3.0 assists with the Buckeyes. Junior guard Jose Perez also transferred from Gardner-Webb, where he averaged 15.2 points, 6.5 rebounds and 4.2 assists through 22 games last season with the Bulldogs.

Some of Marquette’s newcomers have already received recognition from the BIG EAST. Garcia was named Preseason Freshman of the Year and Carton was named a Preseason All-BIG EAST Honorable Mention prior to the start of BIG EAST Media Day Oct. 28.

Men’s basketball head coach Steve Wojciechowski said the new group of transfers and first-years bring a lot to the program in multiple facets of the game.

“They bring things to the table from a physical standpoint, from a skills standpoint and a competitive spirit standpoint that are really exciting and encouraging,” Wojciechowski said on BIG EAST Media Day Oct. 28.

While Wojciechowski was pleased with the preseason recognition of Garcia and Carton, he said that others will contribute to the team as well.

“Obviously we were pleased that both Dawson and D.J. were recognized in the preseason for their potential impact on our team, and I think those are realistic goals for those guys,” Wojciechowski said. “But, in addition to those two, Justin Lewis (and) Oso Ighodaro … have a chance to really impact our team too.”

Redshirt senior guard Koby McEwen said every incoming player brings a different aspect to the game. He said that Lewis could serve as a mismatch for a lot of big men and with Garcia being ambidextrous, he will be able to score with both hands. He also said Ighodaro is one of the most athletic players on the team and Carton serves as a shifty, quick presence in the backcourt.

“I’m really excited for those guys to be able to get on the court,” McEwen said on BIG EAST Media Day Oct. 28.

Senior forward Theo John said that in addition to their talent, the newest Golden Eagles have also had the right mindset when it comes to getting to work on the court.

“It’s a combination of talent and just everyone that’s come in just has really shown the work ethic and determination to get the job done,” John said.

Senior forward Jamal Cain said that Carton’s experience with Ohio State in the Big Ten will help the Golden Eagles at the guard position now that Howard and Anim have concluded their collegiate careers.

“With D.J. too, coming from Ohio State, you know it’s a different conference, but he also brings that hunger, he also brings that drive,” Cain said. “So that’s something that we’re gonna need, you know, to pick up from where … Markus and Sac (Anim) left off, so that will be a good added piece to our team.”

Marquette fans will also get their first look at 6-foot-4 guard Dexter Akanno, who redshirted last season to focus on development.

As a senior at Valencia High School in California, Akanno averaged 15.0 points, 4.0 rebounds and 3.5 assists before taking a prep year at Blair Academy in New Jersey. Fans were given a sneak peak of the California native‘s basketball skills after a video was posted on Instagram this summer of him scrimmaging against NBA players Donovan Mitchell, Jordan Clarkson, Royce O’Neal and Rayjon Tucker.

The Golden Eagles will begin their season Nov. 25 in a nonconference game against Arkansas-Pine Bluff at Fiserv Forum.

“We’re excited about our new faces as a whole,” Wojciechowski said. “And we believe all those guys have a chance to impact our team in a very positive way, in a way that contributes to win.”

This story was written by Nick Galle. He can be reached at [email protected] or on Twitter @thenickgalle.