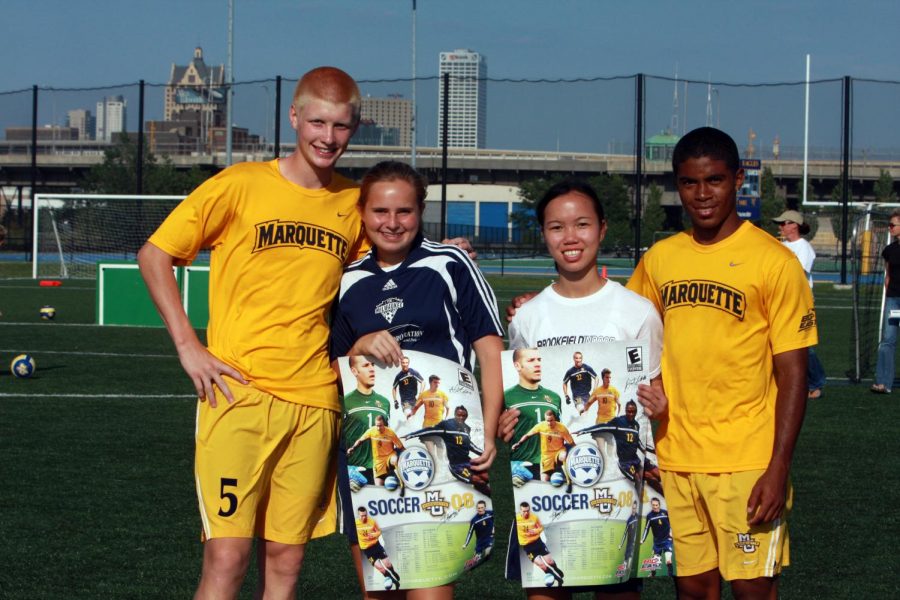 Statistically, less than 2% of collegiate athletes find themselves playing their respective sport professionally. However, former Marquette men’s soccer midfielder Calum Mallace was able to work his way into that narrow percentage.

The Torphichen, Scotland native was selected by the Montreal Impact in the 2012 MLS SuperDraft following his career with the Golden Eagles from 2008-2011. He would then go on to spend time with Minnesota United, Seattle Sounders FC, Los Angeles FC and Austin Bold before retiring at the end of the 2019 season.

Mallace said the professional standard he was accustomed to at Marquette prepared him for the next level.

The 2011 BIG EAST Conference Midfielder of the Year played in 69 career matches with the Golden Eagles and started in 62 of them. He cemented his name in the Marquette men’s soccer record books, as he ranks fifth all-time in career shots with 197 and is tied for second all-time with Jose Itarte, Chris Lee and C. Nortey in game-winning goals, with eight.

Bennett also said he noticed Mallace further his development in leadership skills during his time with the Golden Eagles. He told Mallace he should wear the captain’s armband in his final year because players followed him and admired the standards he set both athletically and academically. Mallace told Bennett he would be willing to wear it, but did not necessarily need it in order to lead.

“Calum wasn’t about separating players, he was about bringing guys together,” Bennett said. “Once he handled his own business really, really well and had a balance — school, soccer and our culture, social culture — then he became a leader. He didn’t even have to wear a captain’s armband, but if anyone said who was the leader, who was one of the most significant people … you would’ve said Calum Mallace.”

In addition to helping Mallace go professional, the skills and mindset he developed at Marquette eventually helped him begin his coaching career. After serving as the director of player development, he was hired as an assistant coach this past summer for the Northwestern men’s soccer team under head coach Tim Lenahan.

Lenahan said the former Marquette midfielder adds a new dynamic to the coaching staff that allows him to connect with the current players.

“The ability for him to relate to guys who talk about being professional, but maybe not act all professional all the time … has really been a help to our program,” Lenahan said.

While Mallace has brought his professional soccer background to the men’s soccer team at Northwestern, he has also been able to understand what players are going through in classroom environments.

“The first thing I heard when I got to Marquette, and then the first thing I heard from Coach Lenahan when I got here at Northwestern was, ‘we’re student-athletes,’ and there’s a reason that student is put before athlete,” Mallace said. “I can really relate to the guys and say, ‘hey, listen, I wasn’t the greatest student, I didn’t love going to class either,’ but as I mentioned, there’s a reason it’s called student-athlete first.”

In addition to academics, the first-year assistant coach also realizes the importance of staying focused on the field.

“I want the guys to be able to have fun and enjoy their time at Northwestern University, but we’re here for a reason, and our reason is to win the Big Ten,” Mallace said. “So the guys gotta understand that soccer comes first in that aspect as well.”

With a collegiate career and professional career in the rearview mirror, and a long coaching career on the horizon, current Marquette men’s soccer players hope to replicate Mallace’s path.

“Oh that motivates us a lot,” junior forward Lukas Sunesson said. “With the coaching staff here, with the culture, the area — everything just motivates us knowing that it’s possible and that it’s just up to us to believe in ourselves and anything can happen.”

As his former coach and now future opponent, Bennett said that he has been happy to see what Mallace has been able to accomplish in all aspects of his life.

“It brings me such great joy to see a guy that needed, and wanted, and you know his love was to do certain things, and he’s been able to achieve it, and he used Marquette as a springboard,” Bennett said. “But he didn’t take, just take, take, take. He gave, he also gave back. You know, he gave a lot.”