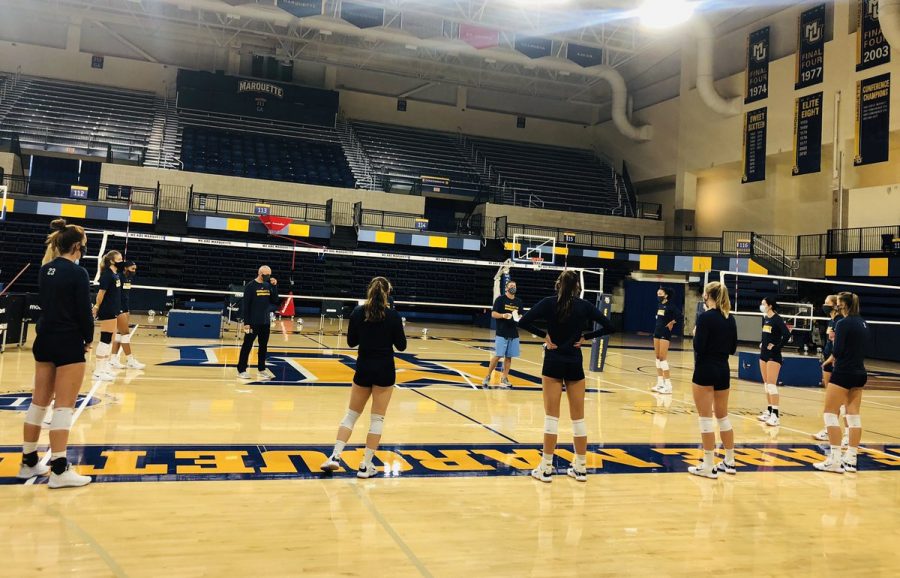 After going through the steps of the four-phase COVID-19 prevention program that Marquette University and the Milwaukee Health Department required, women’s volleyball is now able to attend group practices.

The four-step program was put into place when athletes stepped onto campus this semester. With the completion of every step, athletes were able to have more interaction with each other.

Women’s volleyball head coach Ryan Theis said everyone in the athletics department was tested every two weeks, and once there were no positive tests, the four-phase program began, with each phase lasting 10 to 14 days.

Stage one included voluntary activities and no sharing of volleyballs.

During stage two, players were allowed to share volleyballs with their roommates and lift together. Once phase two started, Theis put the team into what he called “pods,” where a group of four teammates would live together and then be assigned a coach to work with.

Phase three increased the size of the players to groups of 10, and the final phase has allowed the whole team to practice in the gym with masks and social distancing during water breaks.

While the whole team is practicing now, Theis is still keeping the “bubble” of people to a minimum.

“Phase four was team practices and trying to keep our bubble, obviously, as close as possible,” Theis said. “For example, we’re not using practice players (full time students who volunteer to play and help the team prepare for opponents) and we’re not using all our managers on court just to try and keep the bubble smaller.”

Senior middle blocker Elizabeth Orf said the team was ready to get back to practicing together.

“After being off completely for so long, we were all really eager to get back into it,” Orf said.

Since players and coaches are wearing masks during practices, Orf said that it can be hard to breathe at times while working out.

“It’s actually been pretty difficult to get used to it,” Orf said. “The first time we started working out in masks, it was during one of the first stages, so we weren’t able to do that much … We can definitely tell it’s gotten easier wearing the mask throughout the weeks, but it’s still difficult.”

Theis has implemented extended water breaks that are socially distanced and players can only remove their mask for short periods of time. Theis said they are not allowed to have their mask off for more than 30 seconds to a minute.

“Our protocol for going to get a drink, for example, is (to) sanitize your hands, remove your mask, drink the water, mask back on (and) sanitize on your way back to the team,” Theis said. “They can take a few breaths without the mask on as they get water.”

With no games this fall due to the BIG EAST postponing fall sports until the spring, Theis has planned some intrasquad scrimmages and had the first one Oct. 24.

“I’m excited,” Orf said. “At this point we have to take anything we can get, and that’s exactly what we’re doing. I think we’re all excited to be able to play a full game with each other.”