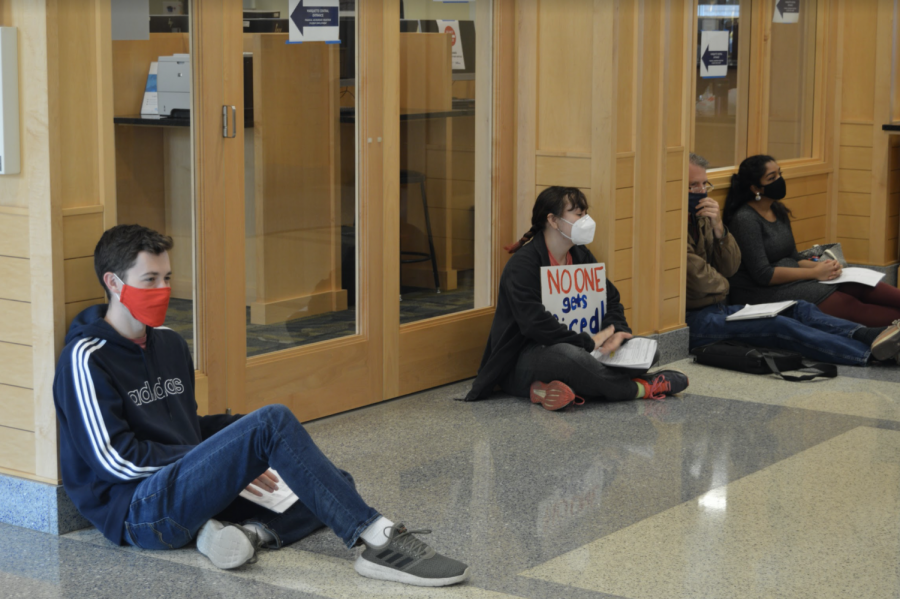 Students filtered in and out of the demonstration, while some stayed at Zilber Hall for nearly 6 hours.

Students for MU Faculty, an organization in support of the hundreds of Marquette faculty at risk of losing their jobs, held a sit-in demonstration for six hours to show their solidarity.

Last month Marquette administration announced the possibility of between 200 and 450 faculty cuts due to a budget deficit arising from the COVID-19 pandemic.

Brooke McArdle, a senior in the College of Arts & Sciences, said the impending cuts make her “heart ache.”

“These cuts are necessary, according to administration. While (University President Michael) Lovell claims they have looked at other options, it’s obvious they aren’t looking hard enough,” McArdle said.

She said the $45 million deficit was not simply the fault of the COVID-19 pandemic, but also the administration.

“Faculty are the beating heart of this institution,” McArdle said. “They exhibit Jesuit pedagogy in the classroom, they foster academic excellence. Who are we without our faculty and our staff?”

McArdle, one of the sit-in’s organizers, said the university needs creative solutions for budget shortfalls, with input from faculty, staff, graduate students and undergraduate students.

“(Administration) strives to ensure Marquette has a future, but it will not have a future if the value system that created it is ripped away,” she said.

She pointed out that neither Lovell or Provost Kim Ah Yun have degrees from Jesuit universities.

“Why are we entrusting people to uphold Jesuit pedagogy if they don’t even know what it means?” McArdle asked.

Students, faculty, graduate workers and community supporters filtered in and out over the course of the six hours, many echoing sentiments similar to that of McArdle.

“I really do believe the faculty and professors are what make Marquette Marquette,” Cory Forbes, a sophomore in the College of Arts & Sciences, said. “If we’re going to be cutting things, we should be cutting the professors last. … We need to stand by professors in this time of struggle.”

Forbes said he hopes the university reconsiders their current plan of action.

“(Marquette) doesn’t stand by its values,” Forbes said. “Its pocketbook comes before (its) prayer book.”

“All students right now, and all faculty, we’re in such a stressful time in our lives that everyone deserves some type of security,” Olivia Ward, a senior in the College of Nursing, said. “They work so hard, and I’ve seen the ways they’ve had to adjust.”

Ward said she does not see the university reflecting its value of “cura personalis.”

“I understand it’s hard times, but what are we here for if we’re not here for an excellent education,” Ward said.

Associate professor of French Sarah Gendron said she attended to stand in solidarity with the students. She said she believes the way administration is dealing with the budget deficit is “hugely problematic.”

“This is a university. This is not a business,” Gendron said.

Gendron said the university’s money should be spent on academics and on students, rather than senior administration and consulting firms.

“It’s going to hurt so many people who have been part of Marquette for such a long time,” Gendron said.

Ericka Tucker, an associate professor of philosophy, said the university’s plan to make up for shortfalls is also a shift in goals and will affect the future of Marquette. She said the changes in research, teaching loads and class sizes will be difficult for both faculty and students.

“I’m trying to put the pieces together,” Tucker said.

Students for MU Faculty has a petition supporting Marquette faculty with more than 600 signatures.