Spooky tunes to listen to during the Halloween season 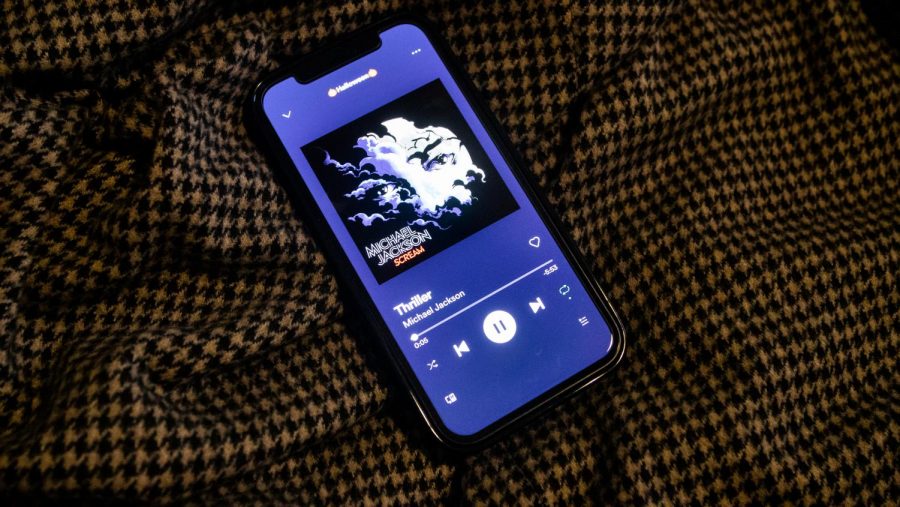 "Thriller" by Michael Jackson is an 80s classic that can be a great song to listen to on Halloween.

With Halloween just around the corner, it is not only an important time to snack on the best Halloween candy, but it is also time to listen to some spooky tunes. Let’s take a look at a few songs that can add to the ghostly vibes of the season.

“Thriller” is a Michael Jackson classic, as well as one of the most popular spooky tunes, especially around the Halloween season. The opening of the song indicates a sense of fright, perhaps throwing you into a haunted house or even a spooky graveyard. The beginning line “It’s close to midnight and something evil’s lurking in the dark” points towards a chilling experience about to occur. With its ’80s beat, the song proves to be a catchy tune with feet-tapping rhythm, perfect for a Halloween dance party.

I Put a Spell On You

“I Put a Spell on You” is a popular tune that has been covered over time. Originally written by Jay Hawkins (Screamin’ Jay Hawkins) in the 1950s, it is perhaps more well known through the famous Disney Halloween movie “Hocus Pocus,” which features the song. The movie is about a young boy who ends up being tasked with defeating three evil witches on Halloween night. As portrayed in “Hocus Pocus,” the song lyrics like “I put a spell on you” and the melody bring about an enchanting theme, almost as one being put underneath a spell. Another version to take a peek at is by Annie Lennox.

Though Taylor Swift’s album “Folklore” topped the charts this past summer, “Haunted” is a song off of her third studio album “Speak Now.” Though it is not as well known, it brings about the haunting of an old relationship, which is perfect for spooky season. Swift uses a minor tone with a robust opening to emphasize the unrest that the end of the relationship has caused. With lyrics like “Can’t breathe whenever you’re gone / Can’t turn back, now I’m haunted,” the memory of the past person stays with Swift. This song is perfect for a candlelit Halloween night with purple and orange colored lights hanging while carving pumpkins.

“Superstition” is a Stevie Wonder classic with a groovy tone. Many well-known superstitions are mentioned in lyrics like “Ladders bout’ to fall / Thirteen month old baby / Broke the looking glass / Seven years of bad luck.” The song describes how superstitions can be terrifying, emphasizing the spookiness of the season. It makes you want to get up and dance a little bit, especially with the different brass instruments in the song. It’s perfect for a car ride to a pumpkin patch or a corn maze as it uplifts the mood and gets you into Halloween spirit.

“Dark Horse” is a popular song of the 21st century, having been released in 2013 by Katy Perry. The song starts out with a somewhat ominous and mysterious tone that indicates something exciting is on the way. Perry sings with anticipation  as the beat builds, singing “so you wanna play with magic?” indicating a future relationship that could be a dangerous type of magic. The song also sprinkles in hair-raising minor tones, not unlike those after a good jump scare during a Halloween movie. This song is perfect for a karaoke night while perhaps pumpkin carving or making some Halloween/fall baked goods.

“I Want Candy” is a popular 1960’s rock song covered by Bow Wow Wow which become the popular 80s tune that describes the desire for a blooming relationship but likening it to candy, almost like a child on Halloween night. With the lyrics repeating “I want candy,” it brings back the memories of being a kid again, walking around collecting candy,  excitedly yelling with anticipation in a child-like fashion for sweets. The song itself has a quick tempo, which bodes perfectly for an evening in while dancing around the living room, snacking on the finest Halloween candy and maybe even baking some Halloween-themed goods.

Though these songs will bring some much needed eeriness to the upcoming holiday, some other songs to possibly add include “Monster Mash” by Bobby “Boris” Pickett and the Crypt Kickers and “Somebody’s Watching Me” by Rockwell.