Wisconsin’s importance as a swing state 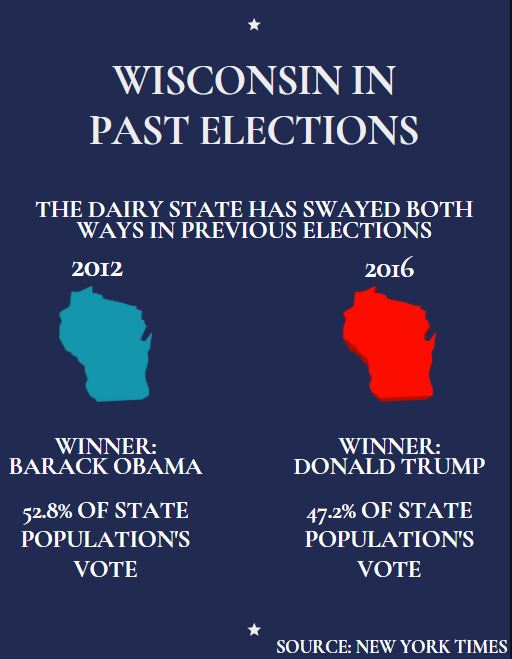 The state of Wisconsin has the potential to be one of the most decisive Electoral College votes in the upcoming 2020 presidential election.

According to fivethirtyeight, Wisconsin has a 13.1% chance of being the state that decides which candidate becomes president. Wisconsin has the third highest likelihood of being the deciding state, trailing only Florida at 14.4% and Pennsylvania at 25.9%. With the possibility of a close election, winning Wisconsin’s 10 electoral votes could make a difference in deciding who the next president will be.

“If the election is a cliffhanger, Wisconsin is going to be one of the states that makes it a cliffhanger,” John McAdams, a political science professor at Marquette, said.

“The president won Wisconsin last time by the narrowest of margins. The recent history and the polling combined suggest that it will be tighter here than elsewhere,” Ryan Owens, a political science professor at the University of Wisconsin-Madison, said.

This isn’t the first close election in Wisconsin’s history. For the past few elections, Wisconsin has been seen as a swing or battleground state.

“We’ve been considered a battleground state for the last three or four, maybe five presidential elections,” Kathleen Dolan, a political science professor at the University of Wisconsin-Milwaukee, said.

The last time that Wisconsin voted for a Republican candidate before 2016 was in 1984 when Ronald Reagan was elected into office.

But the past few elections have been close. In fact, the margin of victory for the winning candidate in Wisconsin hasn’t been over 11% since 1964 when Lyndon B. Johnson defeated Barry Goldwater.

While Wisconsin has voted consistently blue at the presidential level, that hasn’t always applied to state government officials.

“We have a Republican led legislature. If you think about this red state, blue state thing, people see Wisconsin as more sort of divided,” Dolan said.

Wisconsin has had a Republican majority in both the House of Representatives and the Senate since 2011.

“We’re not really far in one camp or the other. Even though in the presidential years we were voting for Democratic candidates, we still have a lot of Republicans in the state” said Dolan.

Other swing states in the 2020 presidential election include Iowa, Pennsylvania, North Carolina, Arizona, Ohio, Michigan and Florida. Florida and Pennsylvania are the only states that have more potential than Wisconsin to be the deciding state in the 2020 election.

With national polls showing Biden leading Trump by a narrow margin, Trump has said that he expects the Supreme Court to intervene.

In the first Presidential debate Trump said, “I’m counting on them to look at the ballots, definitely,” when referring to the Supreme Court ruling on any post-election controversies.

The last time the Supreme Court was involved in a post-election controversy was the case of Bush v. Gore that followed the 2000 presidential election.

The 2000 presidential election was especially close nationwide and in the state of Florida. It was a battle between Republican George W. Bush and Democrat Al Gore. Bush won 271 electoral votes, which is one more than the majority. On election night, there was debate over which candidate won Florida and the 25 electoral votes that came with it.

In Florida there was a huge issue surrounding what ballots counted. In 2000, Florida had punch card ballots. This lead to a lot of confusion. Some voters had failed to fully detach the portion of the ballot. These have been known as “hanging chads,” while other ballots merely dented the portion of the paper, known as “dimpled chads”. This way of voting caused controversy on which ballots cast were valid and could be counted.

Bush won Florida by a margin so slim the state law required a recount. After the recount, the results stood: Bush had won by only 537 votes.

With such a slim margin and no one knowing for sure what will happen, McAdams said there is potential for another Florida case, like in the 2000 election.

“There is a lot of potential for lost ballots, some ballots coming in very late, some voter fraud. I don’t think there will be a huge amount of voter fraud but a small amount in a state with a narrow outcome could create Florida-like chaos,” McAdams said.

With many citizens electing to use mail-in voting due to safety concerns over COVID-19, Trump has claimed that mail-in voting will lead to voter fraud.

“There’s fraud. They found them in creeks. They found some, just happened to have the name Trump just the other day in a wastepaper basket” said Trump, expressing his concerns over mail-in voting.

Gore challenged the results of the recount numerous times. The legal battle made it all the way to the Supreme Court. The court ruled 5-4 in favor of the recount. This ruling officially made Bush the winner of Florida and the new president of the United States.

“In the case of Florida, it would only take less than 1,000 votes that are questioned to throw the whole thing into chaos,” McAdams said.

While McAdams doesn’t anticipate another 2000 Florida case, he still says, “The potential is there.”

In order to effectively challenge the results of the election, Trump and his campaign would have to find reasonable evidence that the election was somehow unfairly conducted, and as a result, the votes couldn’t have been accurately counted.

“His campaign would have to come into Wisconsin and find what they think is some credible reason that votes were not being counted correctly, or procedures weren’t being followed or laws were being broken somehow,” Dolan said. “Then he would go into court and make some argument that that is the case and then there would be this process of starting in federal court and moving up the line that could ultimately go to the Supreme Court.”