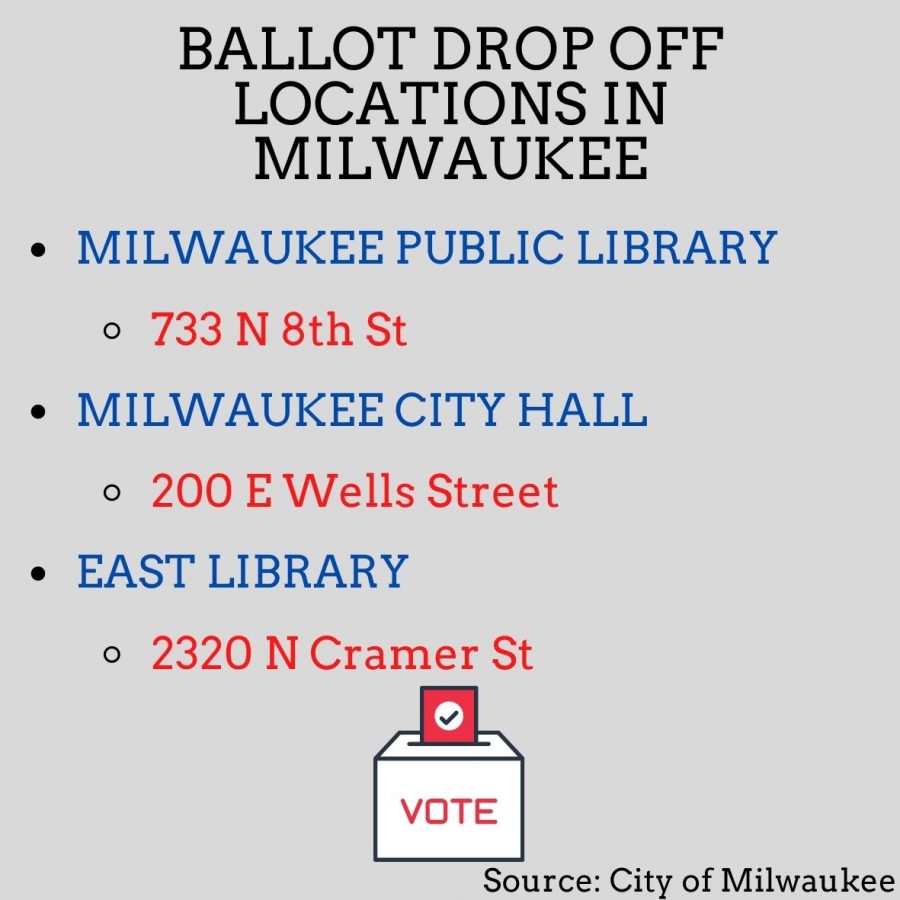 Absentee voters can drop off their ballots at one of 3 locations in Milwaukee.

COVID-19 has been a continual issue within society since early 2020. In the primary elections, many states saw delays and impacts from the pandemic. In particular, there has been increased use of absentee ballots with the states that allow a voter to vote by mail.

Mail-in ballots allow voters to vote from their home if they’re unable to make it to a polling place by Election Day. In 2016, almost a quarter of the ballots were sent in through mail, but in 2020, that number has doubled, seeing a record number of a predicted 50.3% of eligible voters voting by mail in the presidential election.

Philip Rocco, assistant professor of political science, said having mail-in ballots during COVID-19 could be a good thing.

“Having the option to mail in your ballot is an important way to reduce congestion at polling places and to limit the potential for viral transmission,” Rocco said in an email. “As an election official in the city of Milwaukee, I know we are counting on voters’ ability to use this option as a means of de-densifying polling places.”

Julia Abuzzaham, a first-year in the College of Communication, said that she will be mailing in a ballot since it’s safer than going to the polls.

“I believe mailing in a ballot is a great way to vote, especially with COVID, for people to vote in this coming election that aren’t able to do so in person,” Abuzzaham said in an email.

Michael McNee, a first-year in the College of Communication, agreed that voters would will be more encouraged to vote if they do it by mail, since they are not at risk for contracting the virus if they do not go to polling sites.

“My opinion on absentee voting is that it is a good idea to encourage people to vote early and not in-person because of COVID-19,” McNee said. “It is safer and will still allow people that are considered ‘high risk’ the opportunity to vote.”

Patrick Lintner, a first-year in the College of Nursing, said he is voting through mail since he is not from Wisconsin and because Michigan allows absentee ballots.

“Because my home is in the state of Michigan, I plan on having a mail-in ballot being sent to me,” Lintner said. “That way I can still participate in the upcoming presidential and all other elections.”

Rocco said that the only controversy surrounding mail-in ballots would be the new procedural legitimacy regarding the virus.

“I think we should see the ‘controversy’ as surrounding not mail-in ballots per se, but the procedural legitimacy of the 2020 election itself,” Rocco said in an email. “Naturally, any country that is holding an election during a pandemic is going to have to alter its procedures.”

According to National Public Radio, over 500,000 absentee ballots were rejected during the primary elections earlier this year, including over 20,000 ballots from Wisconsin.

President Donald Trump has questioned the legitimacy of mail-in-ballots, saying that there would be, “voter fraud like you’ve never seen” in the first presidential debate, saying that ballots could be “manipulated.”

Samantha Freisleben, a first-year in the College of Nursing, said mail-in ballots are not accurate for voters that will be voting in the upcoming presidential election.

“I do not think that mail-in ballots are 100% accurate because they could easily be changed or lost,” Freisleben said. “This means that the person’s vote would not be counted.”

McNee agreed and said it is easy to get a hold of someone’s ballot and change the vote.

“I do not believe that mail-in ballots are 100% accurate because of how easily they could be tampered with,” McNee said.

Lintner agreed that mail-in-ballots could be inaccurate.

“As much as I want to say yes, I do not think they are accurate, even though I will be using a mail-in voting ballot,” Lintner said. “I think they’re not accurate because of the so many ways that they can be tampered with to become invalid.”

Abuzzaham said she believes that mail-in ballots are accurate and that the vote will be counted.

In the state of Wisconsin, all absentee ballots collected by Nov. 3 by 8 p.m. will be counted. An attempt to extended the collection date was rejected by a federal appeals court.