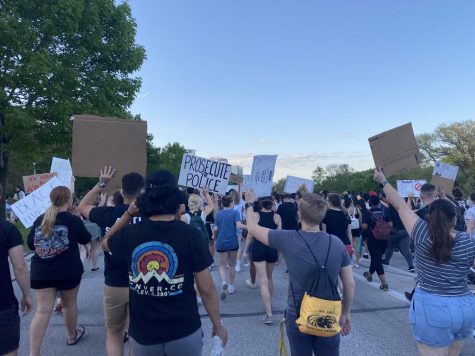 In response to the verdict, there were protests throughout the community.

In early February of this year, Alvin Cole, age 17, was shot and killed by Wauwatosa police officer Joseph Mensah outside of Mayfair Mall.

Milwaukee County district attorney John T. Chisholm announced Oct. 7 that Mensah would not be charged in his death since the use of deadly force was found necessary.

Michael Cover, a professor of theology at Marquette, said that last week there was a series of protests.

“These protests appeared to be mostly peaceful, though a handful of protesters did break windows along North Avenue,” Cover said in an email.

Steve Robertson, associate director for pre-college programs, shared how he felt about the protests.

“With all the protests I’ve been to, I think it’s important to get out that it’s not okay,” Robertson said. “Just you standing up being there and marching is letting people know that it’s not okay. We need to do better as a society and demanding that some things need to change.”

The Wisconsin National Guard was called to support the police during the Wauwatosa protests and that resulted in the police making numerous arrests, which included Cole’s mother and sister.

“The arrests on Friday were especially dramatic and disturbing, with sounds of helicopters, tear gas, screams and rubber bullets including on my own street,” Cover said in an email. “It was very upsetting for many families in our neighborhood and the wider community.”

Morgan Panzenhagen, a sophomore in the College of Business Administration, said she did not attend a protest, but was glad that others near her were.

“Although I did not attend one myself, I’m proud to live in a community that cares deeply about its members and that people are willing to organize and fight for justice for Alvin,” Panzenhagen said in an email.

In addition to Alvin Cole, Robertson said it is important to focus on the other individuals that have been involved in police brutality.

“You can’t separate Alvin Cole from the other issues around and I think it’s bigger than just the individuals to look at the need of doing some systemic changes to what’s going on in our society,” Robertson said. “We keep our consciousness and I think it’s important that we figure out how to make lasting change.”

Along with being a professor of theology at Marquette, Cover said that he is an Episcopal priest and was invited to a protest in Wauwatosa by the organizers so he could say a prayer.

“Before and after the prayer, I spoke with police and National Guard officers, including one from another county, indicating that I did not think the style of policing that had been used represented the values of our community in Wauwatosa,” Cover said in an email. “I prayed for him and for a more peaceful evening on Saturday.”

Robertson said different types of people can be involved in the movement and can still make a difference.

“I think that in any movement there’s all kinds of people. Some are out protesting up front, some are doing things behind the scenes, some people are trying to support the people that are going out on the front lines,” he said.

Cover said he thinks Marquette should provide the space for scholars and students from a variety of disciplines and perspectives to come together and discuss matters of pressing theological and political concern.

“Universities have a very important role to play in moments of civil unrest and political discernment,” Cover said in an email.

“Marquette did formalize a committee for Black initiatives,” Robertson said. “Some of the stuff that the committee established was scholarships for Black students in Milwaukee. Marquette is trying to change the experience for Black students. Even with the pandemic and protests and the ugliness with our law enforcement and the world, we still can see some good potentially can come out of it.”

Panzenhagen praised Marquette for keeping students informed regarding protest activity on campus and giving students of color a chance to use their platform.

“I appreciate that they let us know protest activity was expected, but that was all I saw from the University regarding that night,” Panzenhagen said in an email. “I know Marquette has been trying to give students of color a larger platform to speak on recently, which I think they could always do more of. It is the job of the school to ensure that all students feel safe, represented and seen on campus, so I think amplifying the voices and ideas of students of color is a good start.”