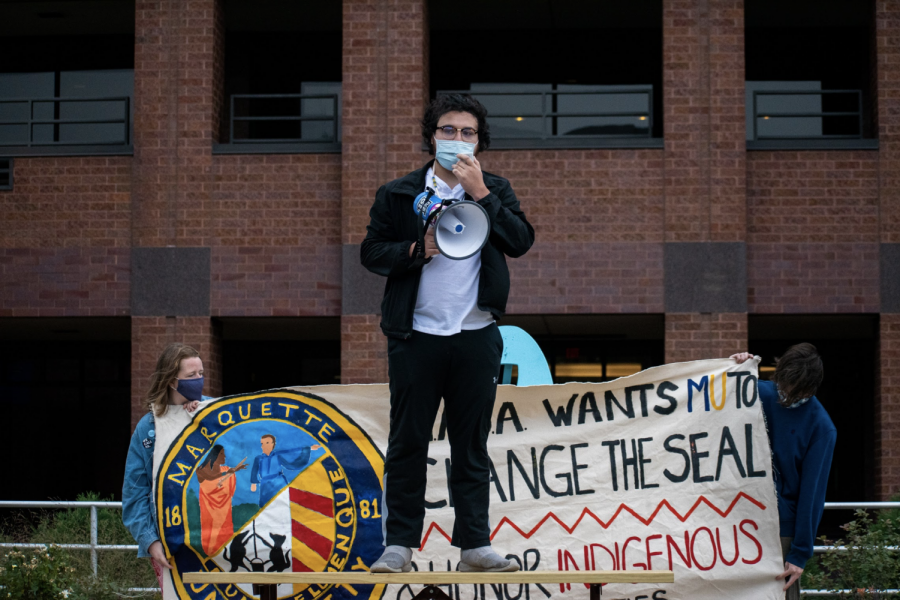 Alex Liberato, president of NASA, stands in front of the Alumni Memorial Union.

The Native American Student Association held a march from the Alumni Memorial Union to Zilber Hall Oct. 12  that demanded the university respect the existence of Native American students.

The list of demands provided by the NASA were for the university’s seal to be changed, for Marquette to provide full-tuition scholarships to Indigenous students from Milwaukee Public Schools and the Wisconsin Tribal Nations, to establish a positive relationship with the Wisconsin Tribal Nations, hire staff to further promote the Race, Ethnic and Indigenous Studies Program and create a campus climate that works toward the success and retaining of Indigenous students.

The Wisconsin Tribal Nations are 11 federal recognized Native American groups that are based in Wisconsin. These nations include the Ho-Chunk, Menominee and Oneida Nations.

Alongside about 20 allied faculty and students and other members of the Native American community, a unity fire was set up in the parking lot outside the AMU, along with a teepee set up by demonstrators.

The current university seal depicts the coat of arms of the Loyola family in honor of St. Ignatius Loyola, who founded the Society of Jesus, along with gold and red banners that represent the house of Onaz from the material side of the Loyola’s.

But the bottom half that depicts Father Jacques Marquette and a Native American in a canoe is where the group takes issue. The depiction is based on an 1869 painting by German-American artist Wilhelm Alfred Lamprecht named “Father Marquette and the Indians.”

A petition in July started by Amanda Harris, a senior in the College of Arts & Sciences, urged the Marquette board of directors to change the symbol, which Jodi Melamed, an associate english professor in the College of Arts & Sciences, said is representative of white supremacy. Plans have been made to alter the university’s seal according to a July statement from Senior Director of University Communication, Lynn Griffith.B ut so far no change has been made.

For the Native American depicted in the seal, Melamed said that depiction shows just a faceless and dehumanized individual taking orders.

However, issues for Native Americans on campus extend beyond just the problematic seal, Alex Liberato a senior in the College of Arts & Sciences and President of the Native American Student Association said.

“(Native Americans) have such a small population (at Marquette) that it’s really hard to just sustain ourselves, but to make a difference outward,” Liberato said.

Currently, Native American students make up less than one percent of Marquette’s undergraduate population, for a total of 16 students.

Liberato said that when he took over as president for the Native American Student Association his sophomore year, his goal was to show the student body not only the issues Native Americans face, but the beauty of their culture as well. So far, he’s been thankful for the allies that have come to aid the cause and use their voices.

“The seal, while it’s heinous, is still just a symbol,” Liberato said. “Really at the end of the day, what we’re going for is a campus that is equitable for Native students and a campus that makes sure that people like me … don’t have to go out every single semester wondering whether or not they’ll be able to register for classes.”

Liberato said himself and other Native students have had to make decisions on whether or not they can re-enroll due to financial hardships, family and blatant toxicity toward Native Americans on campus.

“The First Warrior” mascot was originally introduced in the 1980s to better represent the Native Tribes of Wisconsin but was abandoned in 1987 after students refused to participate as the mascot.

Denning said that people who participated in the mascot would face adversary from fans and students alike for their “effeminate” movements on the court.

Denning said being thrown into a “carnival-like” environment to represent your culture out of context and receive no respect takes a lot of guts.

“You can’t airdrop what a person is into a sports atmosphere, it’s just wrong. But I didn’t know that, I was 18 then, so I went ahead and did it,” Denning said. “Mascotting people is not right, mascotting racism is not right.”

The protestors began their march from the AMU to Zilber Hall at 10:30 . The cold and rain did not stop chants of, “Who’s land? Native land,” to ring out along Wisconsin Ave.

Upon reaching Zilber Hall, the group of protestors were met by members of Marquette administration, including vice provost John Su and Vice President for Inclusive Excellence William Welburn.

Liberato and other members demanded a meeting in person with President Lovell, but administration that they would have to set up a meeting since the president was not on campus at the time. Liberato and the group left Zilber when they realized they would not be acknowledged by Lovell at that time.