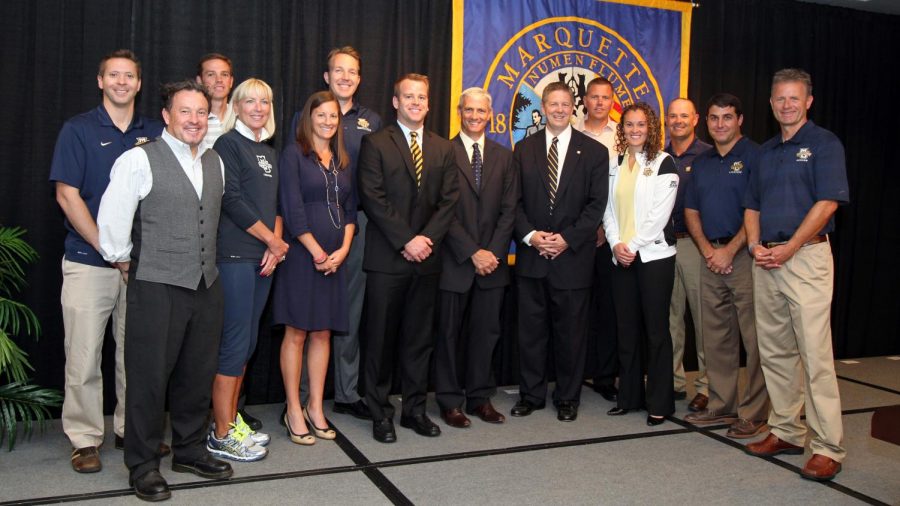 The Marquette coaches stand together at the press conference for then-new athletic director Bill Scholl in 2014.(Photo courtesy of Marquette Athletics.)

As sports, politics and human rights issues become more intertwined this year, the focus has shifted to how athletes and coaches are using their voices to advocate for change on their social media platforms.

At Marquette, coaches across different sports have gotten involved by marching with athletes and staff in the recent march across campus. Many have also stepped up to help their athletes become more educated about social issues.

“You can’t completely shed the emotional element, but I want any opinions they have to be coming from a thoughtful space,” men’s basketball head coach Steve Wojciechowski said. “Our guys have been using their platform well and they have been leaders in both the Marquette and Milwaukee community.”

Wojciechowski said he believes having open and honest dialogue with his players is the best way to make his players feel comfortable and informed about these situations.

“These conversations give all our guys the opportunity to express how they feel, and our reactions to their true feelings creates a space where they can feel safe,” Wojciechowski said. “I stand with my guys, and I learn as much from my players as they learn from me.”

Men’s lacrosse head coach Andrew Stimmel said his program worked with the Black Lacrosse Alliance, a group formed by professional Black lacrosse players in the Premier Lacrosse League,  to help educate his team on the issues they believe are important.

“It’s super important in a predominantly white sport like lacrosse to have deep, meaningful discussions and to provide education,” Stimmel said. “We’re always learning, trying to provide an open door and an environment that’s comfortable for everyone.”

One of the main roles of a coach is to make their athletes feel comfortable in their program. This includes both on and off the court. Ryan Theis, head coach of the women’s volleyball team, said this role has become even more important during this global pandemic and times of racial injustice.

“If athletes ever have feelings of discomfort, I want them to let me know, and we will do anything in our power to prevent that for them,” Theis said. “We’re a group that tries to make everyone feel welcome, and we are welcoming of all different groups so long as they are a good teammate.”

Marquette Athletics brings in athletes from all over the country, but also from many different parts of the world, and this is especially true of the men’s soccer program, as their team is made up of nine players from outside the United States. Louis Bennett, men’s soccer head coach, said making athletes comfortable is one of the most important parts of his job.

Women’s basketball head coach Megan Duffy said for her team, it was very empowering to watch both the NBA and WNBA come together to advocate for change like they each did in their playoff bubbles to end their season. Each league had multiple demonstrations and even boycotts to stand against social injustice. From that, they have learned to have deeper conversations among their team.

“We all have a commonality coming together for our sport, but we have to take time to get to know each other and hear each other’s stories,” Duffy said. “Just in talking to each other different outside of basketball, trying to dig deeper, it’s only going to move forward with creating a better atmosphere for our team.”

Coaches lead the way for their athletes on the court or the field, but outside of the game coaches have been placed in a very important role to be role models and use their platform against social injustice, whether it’s them doing the talking, or their student-athletes.

“We have a common goal, and that goal is to make our communities better and our country better,” Wojciechowski said. “I want my players to know that human rights issues that speak directly to them also speak to me, and that it is something very easy for us to all get behind.”