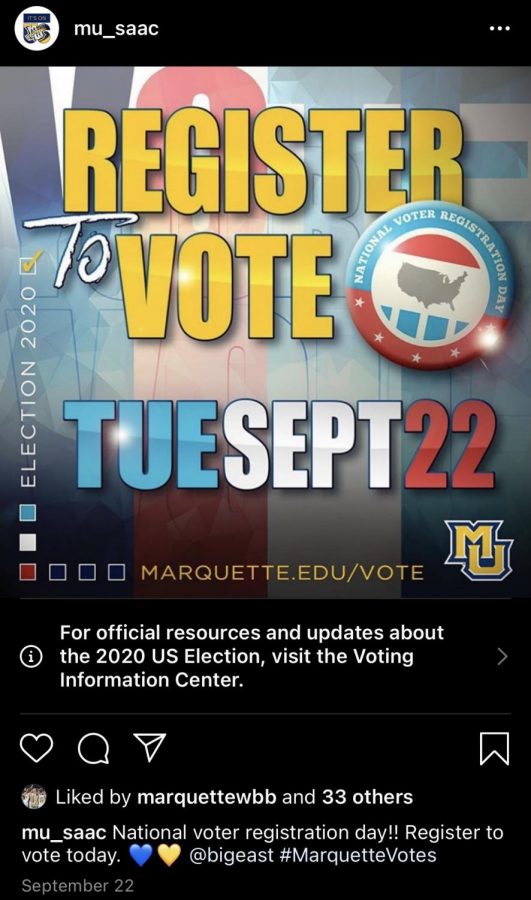 For many Marquette student-athletes, the 2020 presidential election will be the first time they can partake in voting for the next commander-in-chief.

However, for some older athletes like men’s basketball senior forward Theo John, it will be their second election that they are eligible to vote in, but the first one they will participate in.

“Last election I could have voted but at the time, I didn’t feel (it) was important. I look back at that (and) I’m like, ‘that was a selfish decision,’” John said. “I feel as an American citizen, especially as an African American, you look back through our history and people literally have given their lives for me to be able to go and do that.”

John said educating himself on why he should vote changed his mind.

“Our right to vote is kind of like our way to instill the change we feel (is) necessary. I know it’s difficult picking one good person to vote for but there’s a whole lot more on the ballot,” John said. “So much of that will influence how your day-to-day life is. Your voice matters and your voice needs to be heard.”

Kylie Sprecher, a senior forward on the women’s soccer team, seconded John’s thoughts on the importance of voting.

“I had just turned 18 at the end of October right before the last election,” Sprecher said. “I told myself that I was going to now become an active citizen and take part in such an important part of our democracy. It was pretty empowering just to know that my voice was being heard.”

One of the main ways Marquette Athletics is trying to encourage voting registration is through the platforms of men’s and women’s basketball.

“It’s amazing how we’ve kind of partnered with men’s basketball on and off the court,” redshirt senior forward Lauren Van Kleunen said.

Van Kleunen said she started from “ground zero” in regards to voting, but has gotten involved to spread the message through talking with teammates, friends and family.

Redshirt senior guard Koby McEwen, who is unable to vote in the United States due to his Canadian citizenship, said the men’s basketball team has been utilizing their social media presence to spread the message.

“I had a couple of people direct message me,” McEwen said. “If you keep putting it out there for people to see, they’ll eventually either want to gain more information, or they’re going to be like, ‘it’s time for me to go register to vote.’”

Another way student-athletes are spreading the message is through the Student-Athlete Advisory Committee, including getting all of Marquette’s teams fully registered.

“We just want to make sure that we are doing everything in our power in order to encourage people to vote and show them how easy it is because there is a big misconception that it’s a lot more difficult,” women’s soccer junior defender and team SAAC representative Madison Burrier said. “We are trying to make it as easy as possible.”

Women’s soccer head coach Frank Pelaez said he has been encouraging his team to spread the message to students to get educated, rather than relying on peers.

Pelaez said having seniors Maggie Lena and Maddie Monticello in leadership roles on SAAC is a great asset to the team for conversations like this.

“We have so many of our players that want to be in different committees to educate themselves and educate the rest of the team,” Pelaez said. “I’ve been pretty blessed that all these young women are just so driven to make a difference when it comes to the social world.”

In addition to educating on the social world, men’s basketball associate head coach Dwayne Killings said it is a coach’s job to mentor athletes both on and off the playing surface.

“We’re here to mentor young men as basketball players but also as men, as students and hopefully as leaders in the world as they get outside of the Marquette walls,” Killings said. “We’re having a lot of different conversations. So it is deep conversations, and then something as simple as wearing a T-shirt during practice that says ‘vote.'”

Killings said wearing a T-shirt encouraging people to vote is not about convincing a million people to go to the polls, but more so about inspiring one or two.

Sprecher said it is great seeing her teammates and coaches step up and get involved in the hopes of making an impact on both the Milwaukee and Marquette community, as well as their home communities.

“Our team has done a really good job of keeping an open line of communication and feeling comfortable talking to one another about some things that might be controversial,” Sprecher said.

Lena, who is the vice president of Diversity and Inclusion of SAAC, said registering to vote is just the first step to making concrete change, but is a good start.

“It’s only the beginning,” Lena said. “It’s about time that people are kind of seeing this issue and making pushing actions and facilitating these initiatives to get people registered, to educate people, to push this movement of quality and justice. I’m very happy and grateful that I got to be a part of this.”