Killings, Gainey advocate for social change through Coaches For Action 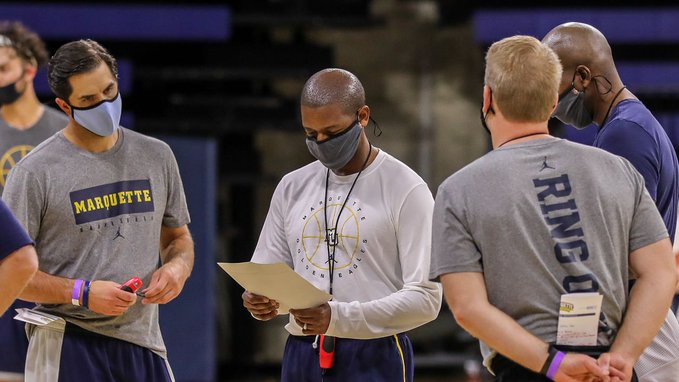 Coaches For Action is an organization founded by 21 Black assistant coaches throughout the BIG EAST. Their mission is to educate and bring awareness to social injustices by using their social media platform to advocate for change.

Due to the ongoing acts of social injustice around the country, such as the deaths of George Floyd and Breonna Taylor, many organizations like CFA are calling for change in support of the Black Lives Matter movement.

Killings and Gainey represent Marquette University and the Milwaukee community as members of the organization. Their roles include helping eliminate discrimination against people of color by spreading their message along.

“Our group got started and motivated by what was going on in the country and we all had extra time digesting and seeing what’s going on around the world, so we just wanted to do more,” Killings said. “We got all the Black assistant coaches in our league together because we felt our conference is unique, but I believe our group is different when it comes to working together instead of competing against each other.”

The organization was founded this past summer, but CFA has already generated change in the BIG EAST Conference. Every BIG EAST basketball team will wear Black Lives Matter patches on both home and away jerseys this upcoming season. CFA also has announced other goals they plan on accomplishing, such as generating voting awareness and a scholarship fund. This scholarship fund plans on sending one Black male or female student the chance to attend one of the 11 BIG EAST institutions and expand their education.

“Our players have an unbelievable opportunity to compete in one of the best conferences in the country, but they also have an opportunity to get an education at these institutions,” Killings said. “It’s really important to give these same opportunities to others who typically wouldn’t get the chance.”

With school out of session and many coaches spending their days preparing for the upcoming season, many coaches believed it was the right time to make change.

“The timing to (join CFA) was just perfect, it couldn’t have happened at a better time to step in the action and do something,” Gainey said. “The George Floyd situation kind of brought the initiative ahead. When Coach Killings called me that day and asked what my interest would be, I was completely on board.”

Even though CFA is run by assistant coaches in the conference, many teams and players are also using their own platforms to spread a message of change. Men’s basketball players such as senior forward Theo John, sophomore guard Symir Torrence and redshirt senior guard Koby McEwen have all shown support for the Black Lives Matter movement through social media.

“Everyone is different and has their own individual way when it comes to speaking up about things like this,” Gainey said. “The only wrong way is to not do anything at all or (to) not speak up when you see any injustice of any type, whether it’s of gender, of race, or religion.”

In a society that has many issues that will likely continue in the future, CFA was created on the belief that communities can be improved for current and future generations by building off the experiences people are going through today.

“We owe it to those kids because for me, I have two young kids, and I don’t want them to look back and say, ‘hey Dad, what did you do back at that time in the world?’ and I say nothing,” Killings said. “In terms of our players, we owe it to them in our commitment to help them as young men, students and athletes.”

As for what is next, the organization is looking to keep spreading their message, bring awareness to social injustices and fighting for what they believe in.

“We have to just keep pushing and keep going,” Gainey said. “A lot has been accomplished already, such as taking down statues and the reteaching of history classes in elementary and middle schools. Overall, a lot of great things have come out of it so far, but it’s got to be a movement, and not a moment.”