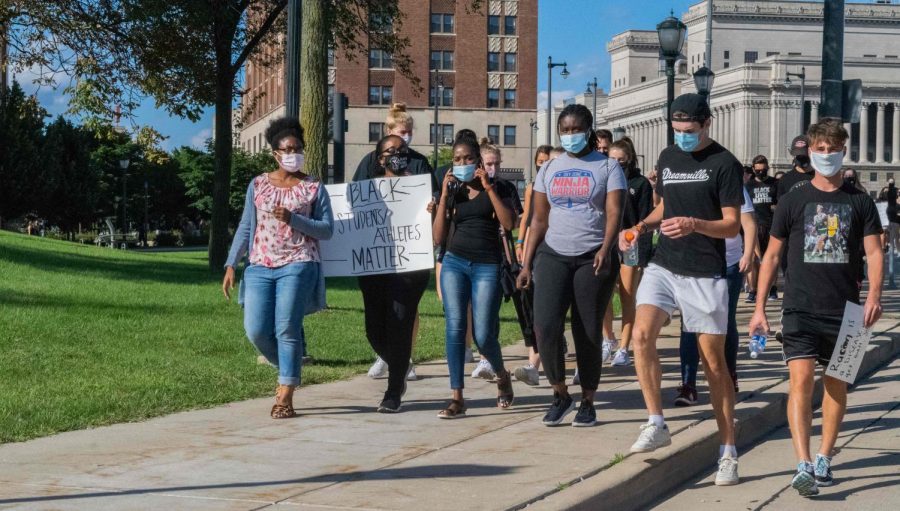 With the COVID-19 pandemic, along with a number of other tragedies this year, many would conclude that 2020 is a year to forget. However, 2020 has also been a year of monumental change due to the growth of the Black Lives Matter movement that stemmed from civil unrest after the world witnessed the murders of Ahmaud Arbury, Breonna Taylor and George Floyd.

Founded back in 2013, the Black Lives Matter movement was created as a result of the acquittal of George Zimmerman, who tracked down and killed Trayvon Martin after viewing him as a threat while he walked home with a bottle of Arizona and Skittles from a nearby convenience store. Martin was only 17 years old.

According to BlackLivesMatter.com, the movement “serves as an ideological and political intervention in a world where Black lives are systematically and intentionally targeted for demise.” The movement affirms the Black community’s “humanity”, “contributions to society”, and “resilience in the face of deadly oppression”.

Men’s basketball sophomore guard, Symir Torrence, spoke about how he initially had a sense of fear after hearing about the Trayvon Martin case.

“As a young, black athlete, I was scared to step outside or even to be pulled over by the police because I did not want the same thing to happen to me,” Torrence said. “Knowing that we are having Black Lives Matter movements around the world (today) … it is a happy moment seeing people come together.”

Although the movement has been around almost a decade, 2020 has been the movement’s most prominent year since coronavirus put sports, entertainment and other distractions on hold.

Men’s basketball senior forward Theo John said the pandemic has played a role in spreading awareness to the reality of police brutality, systemic racism and other social injustices throughout the country.

“(COVID-19 and quarantine) woke people up and took them out of their daily habits,” John said. “It made them look at the world a little differently in my opinion. A lot of people are more aware of what is going on.”

Head men’s golf coach Steve Bailey said the postponement of sports earlier this year and the Jacob Blake shooting led to people reverting their attention to situations that are simply bigger than sports.

“It has gotten to a point where folks have had enough, and justifiably so,” Bailey said. “We put sports on a pedestal and I think it has opened all of our eyes to know that this is big enough to stop what we think is at the highest level in our world.”

For Bailey, he is not only a successful coach at Marquette, but also the father of a Black child. As a white man, Bailey said the Black Lives Matter movement has impacted him personally.

“(My son) is somebody who I love just as much as anybody in this world. You want the best for your child and to think that just because of the color of their skin that they are at a disadvantage … It breaks my heart,” Bailey said. “(I will) try to do everything I can to prepare him to be a man of God and be the best man he can be … A lot of that comes from the example I set for him and those that are around us.”

With everything that Bailey has learned about creating change and being a role model for his son at home, he also emphasizes to his team the importance of how one’s actions are louder than their words.

“I talk to (my players and say that) we can post on social media and say all the things we want people to hear or perceive us as, but it also comes down to our heart and our actions,” Bailey said. “I do not need to post something to let someone know (about what I stand for). I want my actions to speak.”

Ever since last summer, athletes, students and organizations have taken the necessary actions to promote change on campus. A day after the Black Student Council and university administration signed a contract for improved policies and programs for Black students, the athletes march took place.

Student-athletes, students, faculty and staff marched through campus to Valley Fields Sept. 4 to spread awareness about the social injustices occurring throughout the country. Senior and president of the Black Student Council Breanna Flowers said the athletes march is more of an individual event than a Marquette event.

“It means more to the people who did it. When speaking with (John) and Koby (McEwen) and seeing where their hearts were, I knew it was for them and not for the university,” Flowers said. “They get looked at as just talent and not people with feelings and emotions. Them being able to finally speak up and to have a voice is more empowering for them.”

Flowers said the athletes were not doing the march because of their stature on campus, they were doing it because of the reality of being a Black person in the United States.

“When talking with (Cameron Taylor) from the women’s (basketball) team, she kept saying, ‘I want this. I am fighting for us,'” Flowers said. “Basketball does not last forever. At the end of the day, they are still going to be Black. They are going to be Black men and Black women, so they are fighting for themselves and their lives.”

With athletes being a part of the Black Student Council’s sit-ins and negotiations, Flowers understands how the Black Lives Matter movement has brought more unity on and off campus.

“When we had our first sit-in, the men’s and women’s (basketball) teams were there. They were standing behind us and next to us and we were like, ‘Look at them. They are here, everyone here is hurt and broken,'” Flowers said. “(John) was in our meeting with the administration working through what Marquette would agree on and he was very active during the meeting. That alone showed that he cared a lot.”

As athletes, students, faculty and staff come together in solidarity, Flowers wants the demonstrations and activism on campus to not only be bigger than sports but to be bigger than Marquette as well.