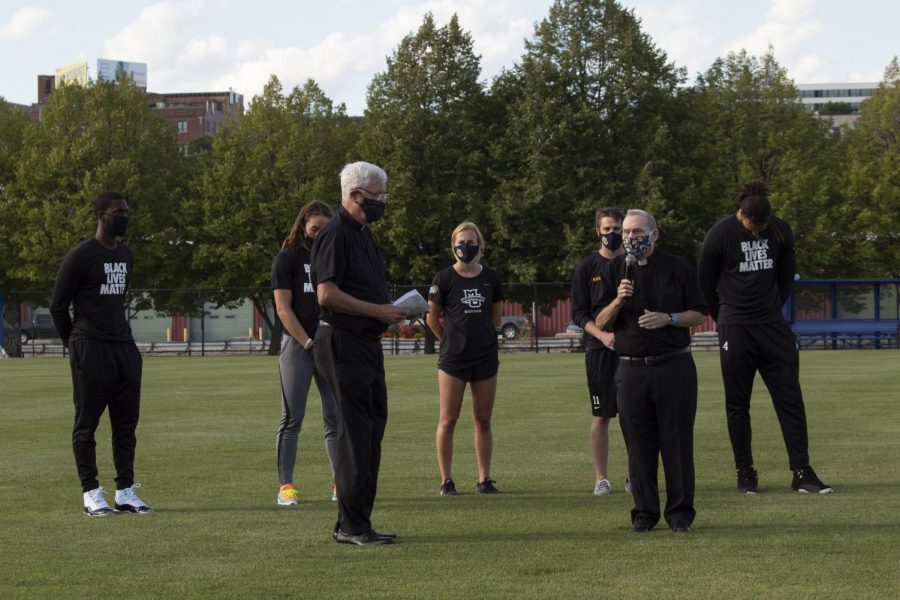 It is no secret that athletes at the collegiate and professional level are looked up to by those in the community. With instances of social injustice plaguing the country, athletes from across the nation have helped lead the charge for change. Among those athletes, some call Marquette University home.

Players across multiple athletic programs at Marquette have participated in protests, both in Milwaukee and their hometown communities.

Marquette athletes organized a march Sept. 4 that started on campus and went down to Valley Fields. Students, faculty and other members of the Milwaukee community walked alongside to combat social inequality and injustice.

Men’s basketball sophomore guard Symir Torrence was one of the many athletes who attended the march. At the end of the route, he gave a speech to the crowd at Valley Fields, sharing his own personal experiences and thoughts on the social injustice in the United States.

“It meant a lot,” Torrence said. “Me being able to go up and go speak in front of some of the students, it just meant a lot. Knowing that they listened and knowing that I have got some feedback that it was a good speech, it definitely brought happiness to my heart.”

Torrence’s teammate, senior forward Theo John, also spoke at the conclusion of the march. While he was appreciative of the hundreds of people who came to support the cause, he realizes that the journey to achieve equality is far from over.

“Yes, I was happy with the turnout, but I wouldn’t say that I felt that that whole thing is finished,” John said. “It’s an ongoing process. We’re living, we’re learning it, and I just take that into my notes for the next thing I try to put together.”

John, a native of Minneapolis, was a part of a sit-in in front of the mayor’s mansion and he attended the protest on the 35W Bridge, in which a truck driver drove through the crowd of protestors. The events came in response to the killing of George Floyd May 25.

College athletes were not the only ones who took to the streets, as numerous NBA players also made their voices heard this past summer.

Multiple coaches have shown support for their players and the movements that have sparked across the nation. Men’s basketball head coach Steve Wojciechowski, women’s basketball head coach Megan Duffy and women’s soccer head coach Frank Pelaez were among some of the coaches to attend the athlete’s march and post on social media showing support for their players and their participation in the event.

Wojciechowski said that his players are leaving a positive impact on the Marquette community by sticking up for what they believe in.

“I believe Marquette’s a place that is always trying to get better and it’s a place when we as a community know better, we try to do better, and I think our guys reflect that,” Wojciechowski said during the march Sept. 4. “They want to leave Marquette a better place than they found it, and that just doesn’t occur on the basketball court, it occurs off the court as well.”

The social justice work athletes are doing now will hopefully pave the way for the future.

“At the end of the day, it’s just doing what’s right,” John said. “It’s one step at a time, one generation at a time.”