LYNCH: Savage Mode II is less of an album, more of an event 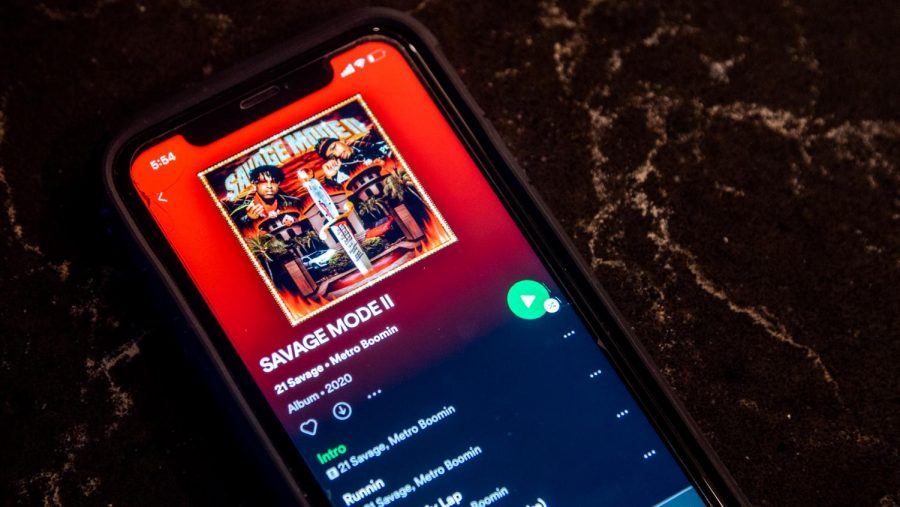 Some songs from the album include "RIP Luv" and "Runnin."

If you ask any documentarian or filmmaker who they would want to bring on if they needed a narrator, they will almost certainly say Morgan Freeman. This is because Morgan Freeman is now in special company with James Earl Jones as a man known more for his voice than he is his performances, mainly because of the sense of importance he infuses into it. With Morgan Freeman as a narrator, whatever he’s narrating suddenly holds a connotation of gravitas.

So, when “Savage Mode II” opens with Morgan Freeman’s booming and dignified voice talking about how greatness courses through history and influences those with the ability to define greatness, there is an immediate impression that “Savage Mode II” is less of an album and more of an event, something that commands all to bear witness to it.

And while “Savage Mode II” is nowhere near as impressive as its first impression suggests, the album does deserve attention for being a very entertaining listen. A sequel to frequent collaborators 21 Savage and Metro Boomin’s previous project Savage Mode, the number one attribution in “Savage Mode II” it is its ambition. It’s clear that 21 Savage and Metro Boomin put their everything into this album, and it shines through completely. From the ingenious choice of having Morgan Freeman narrate the project to Metro Boomin’s dazzling production to 21 Savage continuing to be one of the greatest evolving rappers around right now, no expense was spared in making this album come to life.

21 Savage and Metro Boomin are no strangers to each other, with Metro Boomin producing 21 Savage’s collaborative album with rap group Migos’ Offset “Without Warning” back in 2017, and 21 Savage hopping on to a couple tracks of Metro Boomin’s 2018 album “NOT ALL HEROES WEAR CAPES.” Now they’re back once again, proving to be one of the premier collaborative teams around right now, with Metro Boomin weaving beats impeccably around 21’s growling style of rap. Metro Boomin truly stands out on this album with the stylistic variety of beats he uses, from a spare piano melody on “Said N Done” to a haunting horrorcore trap beat on “Runnin”, he truly runs the musical gambit on “Savage Mode II.” The beats also bear some mention due to how each one stands out on every track, with one song being a pastiche of Eazy-E’s “Boyz-N-The-Hood” and the next being a 70s Michael Jackson-esque groove, each beat gives the songs their own sense of identity while also being well-incorporated into the overall project.

21 Savage is also commendable on the album, maximizing his rumbling style of rap to fit the intensity of some songs while also keeping enough charisma in his delivery to give the tracks life. He’s able to adjust his delivery well for each track on the album, going from overwhelming ferocity on “Brand New Draco” to subdued somberness on “RIP Luv,” with the stylistic changes playing off of each other perfectly. The flow is also outstanding on the project, with “Many Men” showcasing 21’s ability to incorporate spit-fire style rapping to match the piercing energy on the track.

One of the album’s weaknesses is that it becomes repetitive at times, most notably on “Snitches and Rats,” where 21 and Metro both prominently fall flat, with the beat being a rather weak thudding trap effort and 21’s flow being somewhat stilted and lackluster.

However, the album’s main highlight is Morgan Freeman’s narration. Besides being an inspired decision both creatively and narratively, Morgan Freeman shows up and does exactly what everyone expects him to do: be Morgan Freeman. His “Snitches and Rats” interlude is both intimidating and awe-inspiring, and Freeman does a great job selling lines about betrayal and lies in the most cinematic way possible. Anytime his narration comes in, it’s always a welcome intermission in the album.

“Savage Mode II” is by no means a perfect project, but any problems it has are made up for with creative ingenuity and tons of charisma, which makes it a more than worthy listen.