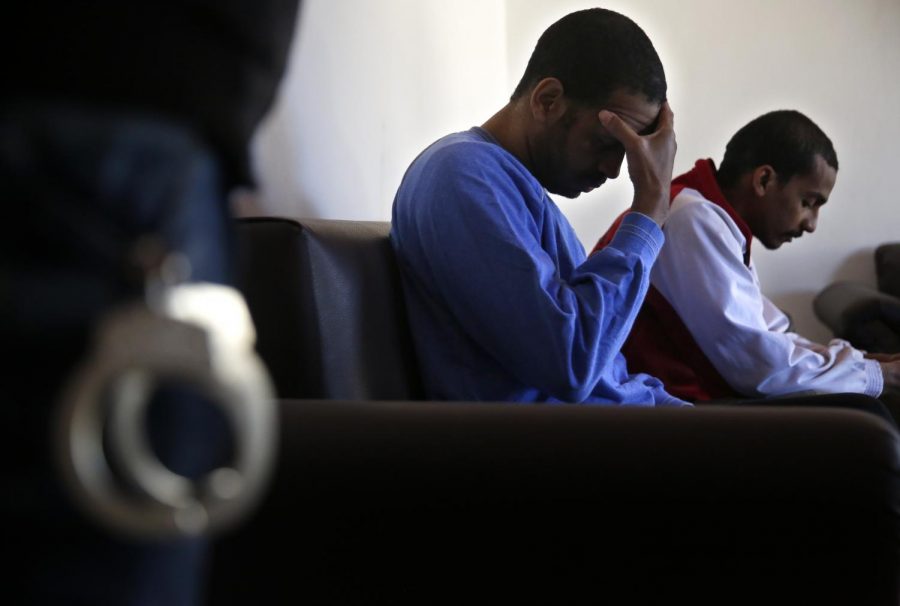 Alexanda Amon Kotey, left, and El Shafee Elsheikh, who were allegedly among four British jihadis who made up a brutal Islamic State cell dubbed "The Beatles," sit on a sofa during an interview with The Associated Press at a security center in Kobani, Syria, Friday, March 30, 2018. The men said that their home country’s revoking of their citizenship denies them fair trial. “The Beatles” terror cell is believed to have captured, tortured and killed hostages including American, British and Japanese journalists and aid workers. (AP Photo/Hussein Malla)

Two Islamic State of Iraq and Syria fighters who were accused of playing a role of kidnapping and murdering Western hostages, including Marquette alum James Foley, have been charged in their deaths and are in FBI custody in the United States.

The ISIS fighters, Alexanda Kotey and El Shafee Elsheikh, are two of four members of an ISIS affiliated group called the “Beatles.” They were known for their British accents and their role in torturing and killing hostages.

Kotey and Elsheikh will be prosecuted in federal court in Virginia. They are charged with hostage-taking resulting in death, which was facilitated with ransom demands, terror and abuse.

“With a heavy heart, we are here today,” Zachary Terwilliger, the United States Attorney for the Eastern District of Virginia, said Wednesday morning at a press conference.

Terwillger said Kotey and Elsheikh will be provided counsel if they cannot afford it, along with medical care and three meals a day as they are in custody, coupled with “the due process of law,” something he said the American hostages did not receive.

According to a statement made by The James W. Foley Legacy Foundation, they have deep gratitude “to all who have worked tirelessly to bring Alexanda Kotey and El Shafee Elsheikh, the two detainees currently in U.S. military custody in Iraq, to face trial in the U.S.”

In a recent United Kingdom Supreme Court ruling, the U.K. is expected to share evidence that “U.S. prosecutors have said they believe is vital for a trial to take place.” The U.S. dropped the death penalty against Kotey and Elsheikh in order for the U.K. to share evidence with the United States prosecution.

The Foley Foundation statement said they are grateful to Attorney General William Barr and the U.S. Justice Department for the decision to waive the death penalty in order for the U.K. to share critical evidence in prosecution of Kotey and Elsheikh in the United States.

Foley was a ’96 Marquette alum. He was killed and beheaded in August 2014. Foley was a teacher and fiction writer before becoming a war correspondent during the Syrian civil war in 2011. During that time, he was captured and held hostage for 44 days by Muammar Gaddafi’s regime. After returning home for a brief stint, he returned to Syria in 2012, where shortly after, he was captured by ISIS and eventually slain.

Other Western hostages include Peter Kassig, Kayla Mueller and Steven Sotloff, who were taken hostage and killed by members of the Islamic State in Syria. They were journalists or aid workers, covering the Syrian civil war and humanitarian crisis.

The Foley Foundation said in its statement that this will be the “first step in the pursuit of justice for the alleged horrific human rights crimes against these four young Americans, who saw the suffering of the Syrian people and wanted help, whether by providing humanitarian aid or by telling the world about the evolving Syrian crisis.”

“We are hopeful that the U.S. government will finally be able to send the important message that if you harm Americans, you will never escape justice. And when you are caught, you will face the full power of American law,” the statement said.

Terwillger said the driver of the families of the American hostages is what led to the news today. He said he looks forward to continuing to work with the families toward justice.

“ISIS will not have the last word when it comes to your children, you will,” Terwillger said.