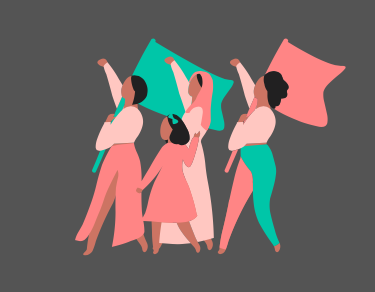 For example, South Korean feminism has grown in numbers in recent years and has increasingly radical ideas.

In 2016, South Korean women were shaken by the “Gangnam murder,” in which a woman was stabbed to death in a gender-neutral bathroom. The perpetrator, Kim Sung-min, explained that he “did it because women have always ignored (him).” The government refused to acknowledge his misogynistic motives in the attack.

Women, not just feminists, took to the streets in huge numbers to protest. According to the Feminist Current, many women who attended did not consider themselves feminists before this act of misogyny.

This type of violence is not exclusive to this one instance. Kim’s reasoning behind his attack is eerily similar to the arguments given by incels, self described “involuntary celibates.” These men have been linked to white supremacy and their internet forums are ridden with violent misogyny.

Every time women gain more independence, a group of men tend to retaliate tenfold. Incels begin as insecure, awkward “nice guys” looking for a  date, and quickly become radicalized into the “alt-right,” a far-right political ideology with a basis in white supremacy.

In May 2020, a mass shooter in Arizona targeted couples to express his anger over not having a partner. 53 deaths have resulted from incel violence. What counts as incel violence includes any attacks in which the attacker self identified as an incel or if there was evidence to show he’d subscribed to incel beliefs. Alek Minassian, who killed 10 people with his van, stated in a Facebook post prior to his attack that “The Incel Rebellion has already begun!”

Incels are not just a problem within the U.S., they exist in many societies. It’s so important to be aware of feminist issues in other countries so we can notice these trends. By looking at misogyny beyond borders, we can better understand what makes certain behavior cross-cultural. Incels, for instance, tend to show up in more industrialized societies where women have more freedom in choosing their partners. From there, we can consider different solutions.

In addition to collaborating with other feminists, we must express our anger in a more external way. In a country where shootings and gender-based violence are all too common, we have become desensitized to attacks such as Minassian’s. In my research, I found no protests against shootings such as his.

On Valentine’s Day 2020, Mexican women took to the streets in outcry over the 4,000 femicides that occurred in 2019. Femicide isn’t just the killing of a woman, but a murder motivated by misogyny. It’s a statistic that the U.S. does not count. Hate crimes are counted, but gender-based violence is not specified in those statistics.

The difference is that South Korean and Mexican feminists alike tend to have more radical ideas and tactics compared to the U.S.

South Korean feminism specifically is closely linked to lesbian feminism, which is a sect of feminism that is unfortunately forgotten in U.S. feminism. Lesbian feminism was founded by queer feminists in the 60s, and has its basis on community building and separatism from men.

Unfortunately, as it rose in popularity, so did the concept of being a “political lesbian,” or a straight woman who does not have relationships with men. This is harmful because it paints lesbianism as a political identity rather than a sexual orientation. Today, these women would be called female separatists rather than lesbians.

While lesbian feminism has a controversial past, the main themes of female power and community are ones that should be followed. Additionally, lesbian feminist first introduced the idea that heterosexuality is not just a sexual orientation, but an enforced part of a patriarchal society. By existing in spaces outside of heterosexuality, they argued, women could further liberate themselves.

The lesbian feminists of 70s America would be thrilled with the work the South Korean movement is doing today. They advocate for four major principles: Don’t marry men, have sex with men, date men or become pregnant. It’s called the 4B movement and has about 50,000 followers.

The movement also includes the slogan “Take off the corset,” the “corset” being commercially feminine standards. From 2017 to 2018, South Korean women spent 53.5 billion Korean won less on beauty products compared to the year prior. It’s not about removing femininity altogether, but instead challenging beauty standards that determine women’s worth in society.

This movement is reminiscent of second-wave American feminism from the 1970s. Women turned up in large numbers for protests on everything from abortion rights to Black women’s issues to more representation in government. They even had a National Women’s Conference in 1977, which 14,000 women attended.

Ultimately, however, the women’s movement lost momentum after conflicts over more radical ideas such as LGBTQ rights, and the incoming conservative Reagan administration didn’t help their cause either. The movement has not seen such momentum since.

A lot of people seem to think we’ve progressed so far in the U.S to the point where feminism isn’t needed. Yet, the Equal Rights Amendment — the very amendment the convention was pushing for — is still unratified in the federal government. 38 states have ratified the amendment that would guarantee equal legal rights for all, regardless of sex. We act as if we’ve made so much progress, yet women still die everyday due to misogyny, and our government can’t even acknowledge it.

People will say that men’s attitudes have changed — but with each man attempting to unlearn misogyny, another one is browsing incel forums, abusing his girlfriend or creating anti-abortion propaganda.

Feminists in the U.S. need to take inspiration from feminists‘ movements around the globe as well as our own past. Recent news, such as Trump’s anti-abortion Christian fundamentalist Supreme Court nominee Amy Coney Barrett, shows just how much trouble American women are in.

Radical feminism is only “radical” and “extreme” in comparison to the patriarchy. Extreme misogyny requires extreme measures against it. Feminism is not just about protests and American women must educate each other on this fact, rally together and adapt our lifestyles to disrupt the patriarchy. Women all over the world have already started.