Younger voters will have great importance in 2020 election 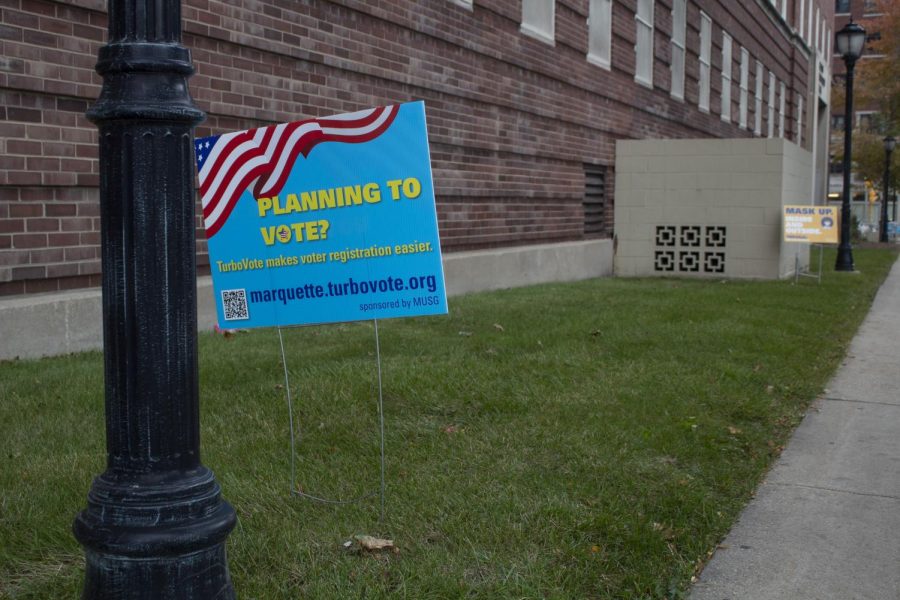 The 2020 presidential election is less than 30 days away, and the state of Wisconsin is one of the battleground states that could decide the election.

The 2016 election saw President Donald Trump carrying Wisconsin by a less than one percent margin. A Republican president hadn’t won Wisconsin’s 10 electoral votes since President Ronald Reagan in 1984. For the past three elections, the candidate who won Wisconsin went on to be elected to the presidency.

But nationwide, college-age voters are supposedly one of the deciding factors in this election. A letter from Vote America founder Debra Cleaver said that there is an expectation to have a record-shattering debut of young voters for the 2020 election compared to the 2018 election where 47% of the voter eligible population participated.

“I knew that it was important for me already to vote,” Morgan Panzenhagen, a sophomore in the College of Communication and member of the Marquette College Democrats, said. “But in a ‘normal’ election … I don’t think I would have been so adamant about making sure I was registered to vote … but I place a lot of importance on it.”

Panzenhagen also said she has encouraged other people her age to vote in the upcoming election since it’s “especially important this year” due to the pandemic and racial justice movements across the country.

“The fact that I’m an adult now and I do understand the implications of who is president and what that means for me and other people, means this is a big deal,” Panzenhagen said. “There’s a lot riding on who gets elected this November.”

This year there have been large campaigns, like the “When We All Vote” campaign, throughout the United States to get people information not only on how to register to vote but instructions on how to fill out and turn in absentee ballots.

“I think after 2016 people started to think maybe things would’ve gone differently if we had a higher voter turnout,” Brian Hendricks, a third year Marquette law student , said. “But I still think (this year) it’s going to be neck-and-neck.”

Hendricks said the 2020 election year can be the year that shows the country that young people “deserve a seat at the table.”

Two main issues are on people’s minds this year, Hendricks said: the COVID-19 pandemic and the economy’s downfall as a result.

“Both of these issues feed into a more overarching concern … security,” Hendricks said. “Both young people and the rest of the U.S. population are missing a sense of security right now, both in (the coronavirus pandemic) and a financial sense.”

In terms of the economy, closing small businesses and unstable job markets for recent graduates can serve as sense of urgency for younger people, he said.

“I think this is the most important election in recent history,” Hendricks said.

Besides voting, younger people also have the opportunity to actively participate in the election through becoming “poll watchers.”

According to the National Conference of State Legislature’s website, partisan poll watchers serve the purpose to ensure that their party has a fair chance of winning the election through reporting any issues to polling places or party officials.

Miranda Spindt, a junior in the College of Arts & Sciences and chairperson for Young Americans for Freedom, has participated in being a poll watcher and encourages other students to make sure their votes are being counted. Spindt will also be voting in person to ensure that her vote is counted.

Young Americans for Freedom is a conservative ideological group made up of young people who focus on the ideas of individual freedoms, a strong free market, and traditional American values.

Another important thing that young people can do during the election is stay informed, Spindt said.

“I’m always doing tons of research and reading the news,” Spindt said. “Every issue is way more complicated than the little information you can get off of Instagram or Twitter … read the news, from both sides of the aisle.”