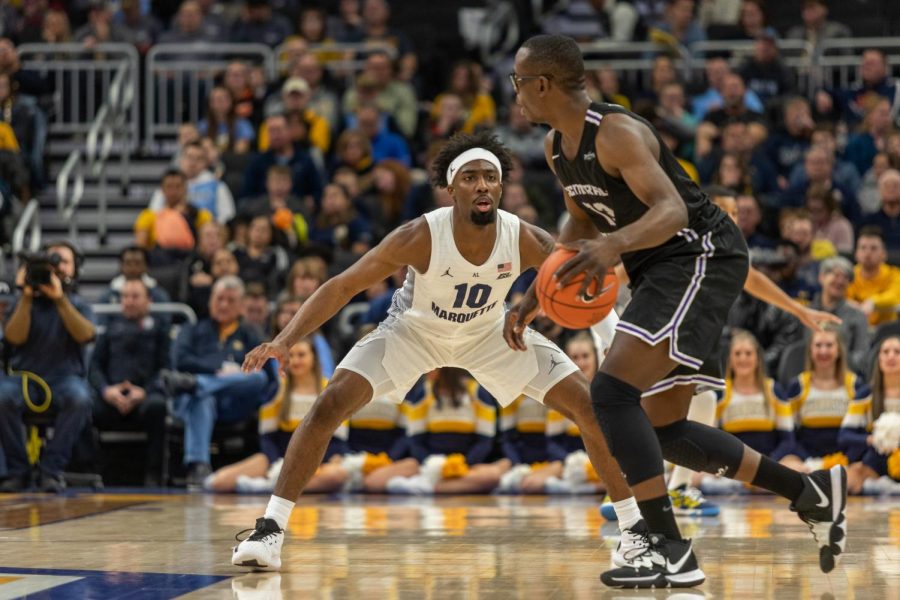 Symir Torrence (10) gets in a defensive position in a game against Central Arkansas last season.

Many questions still surround the upcoming 2020-21 NCAA men’s basketball season. One of the biggest is whether fans will be in the stands or not when the season tips off on Nov. 25.

For Marquette and NCAA programs all across the country, it is a question that will not be easily resolved. Brian Morgan, an assistant athletic director in the ticket sales & strategy department, said, there are 2,000 questions and about two answers.

“I’m a big planner by nature, all of us in the industry are planners, but this year you can output a bunch of plans and scenarios in place and the next day everything changes,” Morgan said.

It is safe to assume that we will not be seeing a sold out Fiserv Forum this year for Marquette men’s basketball, but the possibility of fans being at games still remains. The question then is: What is the capacity and who will be given priority when it comes to getting tickets?

Morgan noted that selling tickets for collegiate games is completely different than the professional level because there are three separate demographics: students, season ticket holders and the general public, with the process of selling tickets to those three groups differing greatly.

“Our highest-level season ticket holders, our donors and, of course, our students are a huge part of our gameday experience in creating that environment,” Morgan said. “Until we can get more of a definition of what we’ll be allowed to have, it’s hard to have a plan for that.”

The capacity of Fiserv Forum is 17,341. If the program allowed 25% of the stadium’s capacity, similar to what Major League Baseball is doing for its NLCS and World Series, the capacity would be 4,335. Morgan said that it is less about the percentages and more about how they can follow the social distancing guidelines that will be put in place.

“It’s a lot harder to work with, say, 1,000, than it is for 5,000,” Morgan said. “We’ll rely on public health officials on campus and at Fiserv Forum, but we aren’t expecting final decisions soon.”

For the season ticket holders in particular, the process for them is comparable to what some professional teams are doing. There is a refund policy in place where if people commit money now and games are cancelled, they can get a full refund, push the money to next year or donate the money to the school.

“I don’t feel worried at all about putting money into tickets right now,” Scott D’Urso, communication studies department chair who has been a season ticket holder since the 2006-07 season, said.

D’Urso said that the Green Bay Packers are doing a system in which season ticket holders can “opt-out” of the season if they are not comfortable going to games and open the limited seating for others. He thinks Marquette doing the same would be a step toward helping them with allowing more in each group of students and season ticket holders.

“You can divide up who wants to go to the games and try to get people to as many games as possible given how many are allowed in,” D’Urso said. “A lot of people still want to attend, and if there’s a safe way to do it, then they should be looking into that.”

D’Urso also suggested that a similar process could be used for student tickets, but with a system that prioritizes seniors who want to go and then go down from there with juniors, sophomores and first-years.

Among the many possibilities Marquette has, they could all become moot if the BIG EAST as a conference sets their own rules as to how their teams will operate this season. The BIG EAST has not yet made any final decisions, and no school in the conference has made any final decisions or commitments, but this is why during the COVID-19 pandemic, communication between the schools has been more frequent.

“We haven’t heard any decisions from the BIG EAST, but one thing this pandemic has done has brought the ticket offices in the conference closer together,” Morgan said. “We’ve never had monthly dialogue before, and it’s been helpful for idea sharing and seeing what’s working well and what’s not.”

In an interview with NBC10 in New England, Bob Driscoll, the athletic director at Providence University, said that he does not anticipate the Providence basketball team to be able to play in the Dunkin’ Donuts Center, where they play their home games. He said even if they are eventually able to play there, he does not expect fans to be allowed into the games. No schools in the conference have made any definitive statements regarding fan attendance.

Ultimately what may be the deciding factor for fan attendance is the current state of the coronavirus pandemic. For Marquette, the campus is currently at a “moderate” alert level, but cases are on the rise and Sept. 25 a second student residence hall went into quarantine.

D’Urso, who as a professor is currently away on research sabbatical until next semester, said he is more concerned about the health and safety of his family than going to basketball games.

“I would love to go, but I have two young children and the safety and health of my family takes precedence,” D’Urso said. “It would be disappointing not to be there in person, but if they can play safely, I can cheer safely from home and enjoy that just fine.”

If health and safety concerns do take over and no fans are allowed at games this year, then Marquette will have to endure even more financial losses than they already have.

“Obviously men’s basketball ticket sales is a huge revenue piece for us in athletics,” Morgan said. “We would need to get creative in how we do things, but every challenge presents an opportunity for new things, particularly with increasing fan engagement.”

For many college basketball fans, the start of the season can not come soon enough. For those making the decisions behind the scenes and in charge of executing a safe plan for college basketball students, coaches and fans; a lot of unanswered questions remain with just over seven weeks until the tentative Nov. 25th start date of the season.

“In order to move forward we have to rely on our relationships, learn from each other and connect with one another to make the best decision for our fans,” Morgan said. “At the end of the day we want to accommodate all our fans in some way.”

Regardless of whether fans are in the stands or not, longtime fans of the team like D’Urso are excited to have Marquette basketball back in their lives.

“I’ve seen how the NBA has done their model with no fans and as long as the games are televised, we’ll be fine,” D’Urso said. “This is something we’ve missed since March. It’ll be a different environment but watching games will have the element of feeling normal, if there is such a thing anymore.”