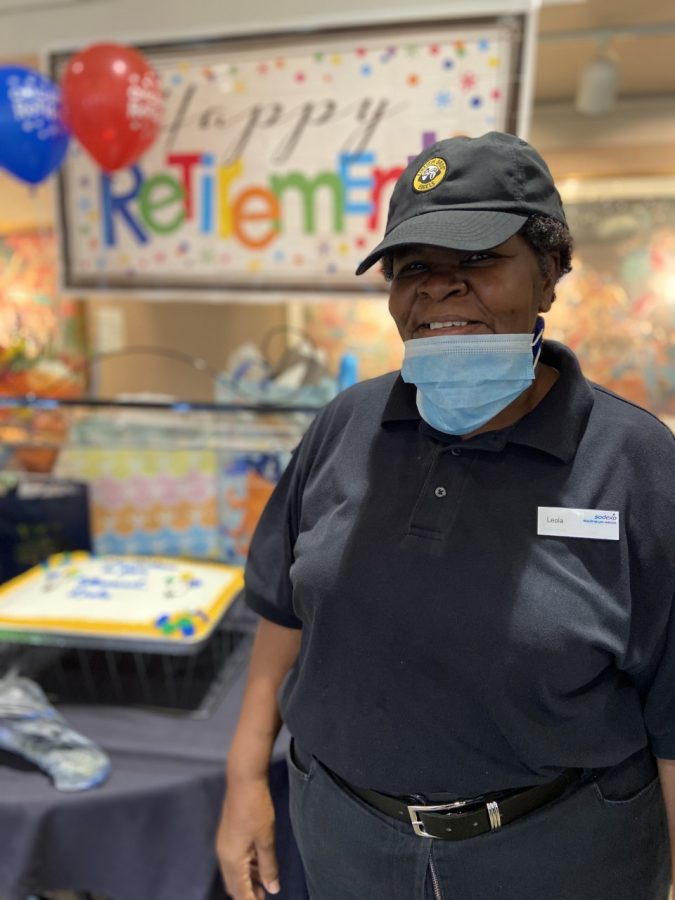 After nearly 42 years of working in dining services at Marquette, Leola Walker has retired. Her last day was Sept. 30.

Marquette looked a lot different when Walker started working at the university in 1979. She began working in Cobeen Hall and then McCormick Hall, before moving on to work in the then newly built Alumni Memorial Union in 1990. Since then, Walker has become a familiar face at Marquette Place, most recently at Einstein Bros. Bagels.

Walker said she loved her time at each of the dining halls.

Even so, she said it was her time to retire following her birthday in September, after her sons begged her to. She said it was bittersweet.

Shirley Roberts, worked with Walker for 28 years at Marquette Place.

“(Leola) was like a second mother to me,” Roberts said.

Roberts described the way Walker knew all of the students by name.

Calvin McLillian has worked with Walker for six years in the AMU. When he began working at Einstein Bros. Bagels in the AMU, McLillian said she showed him the ropes.

“Miss Leola is one of the sweetest people in the world,” McLillian said. “One of the easiest people to work with.”

McLillian said he was sad when he found out Walker was retiring, but hopes she gets to enjoy herself.

“She was always cheerful,” Ruskiewicz said.

Ruskiewicz described some of Walker’s random acts of kindness. He recalled one time when she brought in a loaf of banana bread for everyone, which he said was “really delicious.”

He said he hopes Walker can do all the things that she loves in retirement.

Tyhesha Jackson, who worked with Walker for 11 years at Marquette Place, said Walker was the “mother of Marquette.”

“It was a great experience working with her,” Jackson said. She described Walker as an encourager — Jackson said Walker helped her readjust when she switched to working at Einstein’s from being a cashier at Marquette Place.

“Marquette Dining Services thanks her for her unmatched contributions to the Marquette community,” Abendschein said in an email. “She will be greatly missed and we wish her the absolute best in retirement.”

Kendra Klamm, a senior in the College of Business Administration, said she met Walker her first year at Marquette.

Klamm said she’s happy for Walker and her retirement.

“I want to wish her well and I just want to thank her … for being a smiling face,” Klamm said.

Now that she is retired, Walker said she crochets and sews to keep herself busy. She takes a Spanish class online and is involved with her church as well. Once the pandemic is over, she said she’s planning on traveling — specifically to the Bahamas.

She said she is also going to take some of her free time for one of her favorite hobbies: fishing.

“You best believe I’m going to be out there by the end of the week,” Walker said.

Walker said she misses her “crew” but keeps in contact with them. She said she “hasn’t missed a call yet.”

“I worked with some awesome people,” Walker said. “I miss it already.”