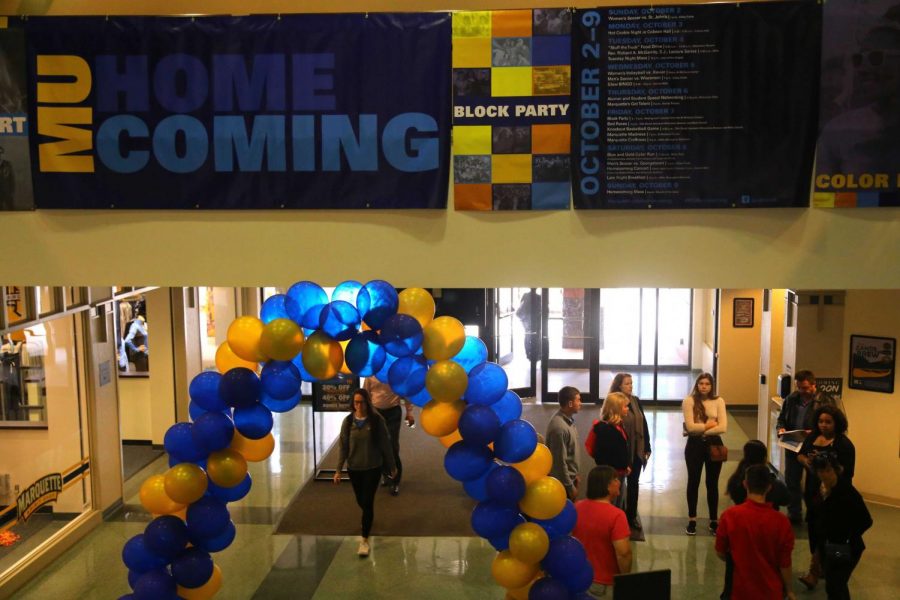 During a regular academic year, early October is the time for students to participate in Marquette Homecoming traditions. Though this year is different, Marquette’s Office of Engagement and Inclusion hosted a Homecoming in collaboration with other campus partners like Marquette University Student Government and the Residence Hall Association from Oct. 1 to Oct. 4, called MU Homecoming House Party, The Virtual Remix. There was a mix of in-person and virtual events and a Marquette Homecoming court with Homecoming royalty which was based on votes from the student body.

Among the events was Late Night Disney Trivia and Comedian Darren Brand, along with virtual events like a Homecoming court Q&A to get to know the contestants and Aux Wars, which was a virtual student DJ competition.

Riley Lade, a junior in the College of Communication, was able to participate in a few events this year, as she has been involved in past Homecoming events.

“I just specifically remember freshmen year, like, me and my brand new freshman-year roommate went out and did all the activities, and it was the year you could drop from, like, two stories and you’d jump onto this big blow up thing,” Lade said.

Like in previous years, Lade said she tried to participate as much as she could, including taking part in the Aux Wars as well as applying and making it onto Marquette Homecoming court in which students would then vote for two participants on the Homecoming Court to become the Homecoming Royalty.

Lade explained that in the Aux Wars, they had seven contestants who got paired up against one another. They were given a specific genre and about an hour to pick six songs with the opportunity to play three to beat the other person. Those who logged on to watch and participate were able to vote and the winners received cash prizes and other items. Lade said one of the rounds had a cash prize of 50 dollars and other rounds had hoodies and t-shirts.

Lade said along with the Aux Wars, she was able to participate in Homecoming court.

Ben Jackson, a junior in the College of Arts and Sciences, also decided to apply for homecoming court just to run and see what happened. He also applied because he wanted to be a role model on campus.

“The reason I applied to run for Homecoming royalty is to be a role model for the Marquette community and in particular for the Black students on campus … the main reason why I do all these activities is to be a positive role model and portray Black men in a positive light,” Jackson said.

One of the events, Late Night Disney Trivia, was held in person Thursday night in the AMU ballrooms.

Megan Collier, a junior in the College of Communication, helped create the Late Night event. She hoped to draw in a good amount of people, especially with the Disney theme. Precautions were in place with one person per table as well as clean pens and paper at the tables. She said she was sure there were a lot of first-year students, but she also noticed the amount of seniors.

“We had a good handful of seniors … it’s really fun to hear that they’re still participating as much as they could and getting the most out of the college experience,” Collier said.

Though some of the events have already occurred, there is also book drive put on by RHA and MUSG that will continue into next week.

Miracle Faller, a senior in the College of Arts & Sciences as well as the president of the Residence Hall Association, explained that the book drive donations will go toward the Reach Out and Read program.

“We’ve extended it to last until next week to the 11th so that students have more time to gather books. They (MUSG) have a box in their office and faculty can be involved too … it’s for the Reach Out and Read program,” Faller said.

Other donation bins can be found in the residence halls as well as in the MUSG office.