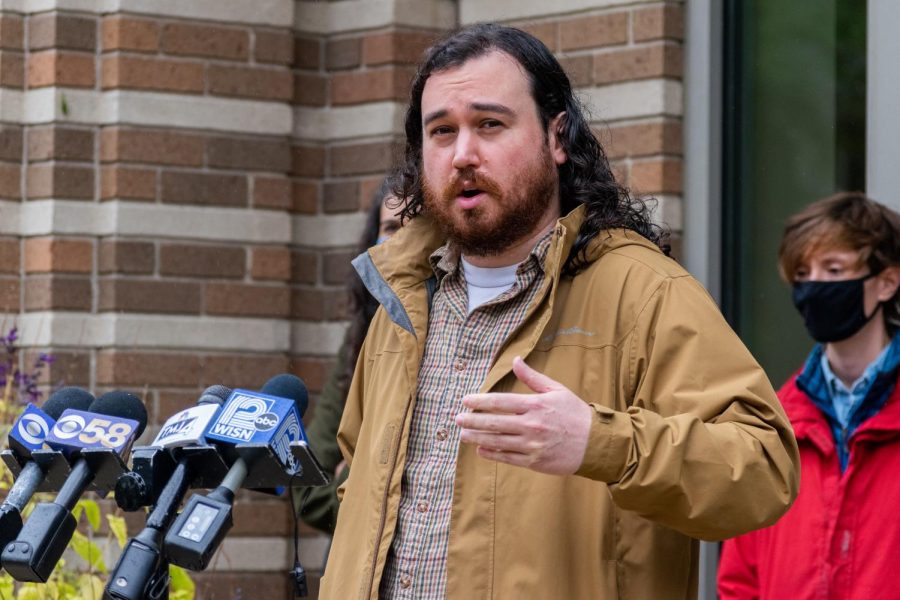 Members of the Marquette Academic Workers Union and Marquette University Faculty United held a press conference in response to the university’s potential faculty and staff cuts Sept. 30 in front of Zilber Hall.

Sarah Kizuk, a graduate student worker, presented a statement from the union.

“Marquette is no longer an educational institution. It has become a hedge fund with a tuition revenue stream,” Kizuk said.

Kizuk said that the Lovell administration proposed a plan that could result in cutting 450 jobs, 275 of which come from academics. These numbers are not concrete, Kizuk said, as there have been different sets of numbers presented at the Sept. 21 Academic Senate meeting, the Sept. 28 Town Hall and Provost Kimo Ah Yun’s coffee chat Sept. 29, ranging from 250 to 450 job cuts.

“These cuts will primarily impact the most vulnerable academic staff at the university: our nontenure track instructors and graduate lecturers,” Kizuk said.

The group is organizing around one principle: no one gets fired. Furthermore, they have three demands: a pledge to use the university’s endowment to forestall cuts, equal representation of faculty and staff in producing Marquette’s budget and assurance that Marquette will open its books to scrutiny to ensure the budget process is democratic.

“We will not accept mockery of our vocation any longer,” Kizuk said.

Chris Gooding, a visiting assistant professor of theology, has been at Marquette for nine years. He said he sees these proposed cuts as part of a pattern, citing the 2019 unionization efforts.

“(Many) individuals who teach at this institution are seen, by and large, as disposable,” Gooding said. “This proposed set of cuts is the culmination of a long process, COVID is simply exacerbating a process that was already in motion.”

Thomas Hansberger, a graduate instructor, said he’s been at the university for several years, teaching for below-poverty wages and no health care coverage or job security. After seeing the way administration has responded to faculty input, he said it is clear there is not shared governance on Marquette’s campus. Shared governance refers to the idea that faculty should have input on university decisions.

“The Board of Trustees and President Lovell make unilateral decisions, directly in contradiction to what faculty, staff and students need,” Hansberger said.

Hansberger called for recognition of the union.

Sonia Barnes, an associate professor of Spanish, said that something tenure-track and nontenure track faculty have in common is their long-term commitment to university. During her seven years at Marquette she said she has seen two presidents, three provosts and three deans of the College of Arts & Sciences.

“Some of these people have made unilateral changes that have negatively impacted our programs and then they have left,” Barnes said. “They have left us to deal with the mess, with the aftermath of those decisions. This is why faculty need a real seat at the table.”

She said losing faculty and programs is the worst case scenario, not using the endowment.

Brittany Pladek, an assistant professor of English, said the administration’s willingness to let nontenure track faculty shows it does not value them.

“That’s a great shame because they are what makes Marquette Marquette,” Pladek said. “My colleagues represent the heart of Marquette’s teaching.”

This story was written by Alexa Jurado. She can reached at alexa.jurado@marquette.edu.