KOCH: Wisconsin behind in drug legislation 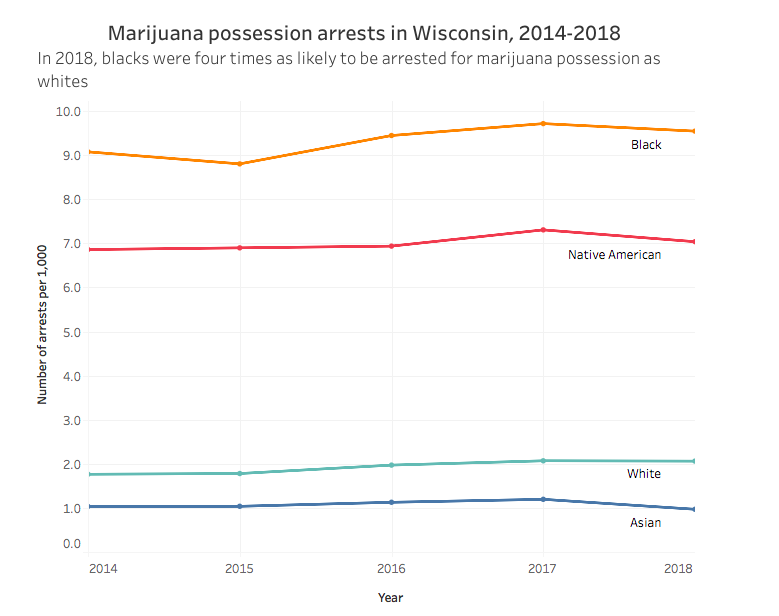 Wisconsinites need to have more aggressive activism for legalizing naturally occurring drugs such as cannabis and psilocybin mushrooms. Voters must play a part in pushing for loosened restrictions on these drugs.

In Wisconsin, the story is quite different. It is one of only 23 states that still arrests and incarcerates people for cannabis possession, and one of only 17 states that lacks a compassionate medical cannabis law, which would allow for the prescribed medicinal use of cannabis with very low THC levels. Cannabis with any psychoactive compounds such as THC are completely illegal.

Cannabis legalization specifically is an issue that affects more than just those who use recreationally. Wisconsin has the highest Black male incarceration rate of any state in the United States as well as the second highest rate for Black incarceration regardless of gender. Heavy policing of communities of color lead to higher rates of drug-related arrests, even though white Americans use drugs at a higher rate than Black Americans, according to The Hamilton Project.

In Wisconsin specifically, Black people were four times more likely to be arrested for cannabis possession than white people in 2018, according to Wisconsin Watch.

In the 1930s, after Prohibition ended, the U.S. government was looking for a new enemy. Cannabis was mostly being used by Mexican and Black communities at that time. To demonize those communities as well as the plant itself, the government painted it as “a threat to an already crippled country.”

This is an entirely fictional premise. According to the United States Drug Enforcement Administration, cannabis and psilocybin mushrooms are schedule 1 drugs. This means they have “no currently accepted medical use and a high potential for abuse.” Drug schedules go from one to five, one being the most dangerous and five being the least, showcasing that the federal government wants to criminalize and target those using marijuana.

Psilocybin research has already begun in research facilities such as Johns Hopkins University. The studies show that the drug aids in overcoming alcohol and nicotine addictions and can help those with depression. Furthermore, the drug has a low potential for abuse and is not physically addictive.

Despite all the evidence for legalization, Wisconsin is still stuck behind its neighbors. Governor Tony Evers’ efforts to loosen cannabis restrictions have continuously been met with opposition from Republicans in the state’s legislature. In April 2019, his plans to work towards legalization were not included in the state’s budget. In the same year, Republicans blocked a bipartisan bill to legalize cannabis, a bill that was backed by Evers.

“When more than 80% of our state supports medical marijuana … and elected officials can ignore those numbers without consequence, folks, something’s wrong,” Evers said in his 2020 State of the State Address Jan. 22.

The problem lies in the Republican controlled legislature. However, this is subject to change, as Wisconsinites will be heading to the polls or sending in their absentee ballots Nov. 3.

Young voters need to educate themselves on different candidates’ campaigns and where they stand on drug legalization and decriminalization. We cannot afford to pretend it’s out of our control. Changing the makeup of the legislature is the final piece of loosening restrictions on cannabis.

Cannabis and mushrooms are not dangerous compounds with the correct information and regulation. Scientific evidence shows that these drugs are not a threat to public safety, and can help many citizens struggling with pain or mental health conditions.

Wisconsinites need to continue to push for drug education programs, looser drug restrictions and eventual full legalization. This change starts with voting in more progressive legislators this election season, as well as continuing to spread information on drug legalization.