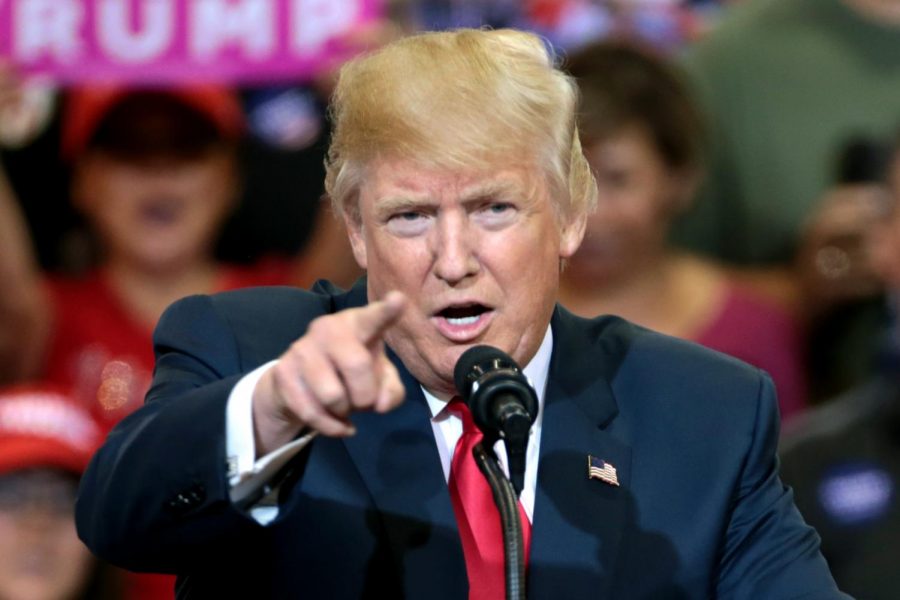 Trump gives speech at a rally in Phoenix, Arizona. Photo via Flickr

Trump does not, cannot and never will embody the Republican Party. His inability to recognize past Republican leaders as well as his disregard for fallen soldiers ultimately proves that he is unworthy of the Republican nomination for the 2020 presidential election.

He tweeted, “I hardly know Cindy McCain other than having put her on a Committee at her husband’s request. Joe Biden was John McCain’s lapdog. So many BAD decisions on Endless Wars to the V.A., which I bought from a horror show to HIGH APPROVAL. Never a fan of John. Cindy can have Sleepy Joe.”

First, Trump’s response via Twitter is very unpresidential, especially in regard to an election that he is a part of. It is tone deaf, immature and extremely unprofessional.

Secondly, this shows immense disrespect to McCain, who had deep roots in military service, as he was the son and grandson of two U.S. Navy admirals. He spent his career in the Navy as a pilot and was also captured, tortured, and held as a prisoner for over 5 years by the North Vietnamese. He received a hero’s welcome when he was freed, as well as several awards, most notably the Silver Star and the Legion of Merit, which are high military honors.

During Trump’s campaign for the Republican nomination for president in 2016, he completely disregarded McCain’s service by saying, “He’s not a war hero. I like people who weren’t captured.” Furthermore, Trump refused to show support after McCain’s death, saying he didn’t want to go to “that loser’s funeral.” Trump was also visibly angry and upset when the flags of the White House were lowered to half-mast in respect for McCain’s passing.

By refusing to honor and attempting to lessen his military service, Trump ultimately disregards what the Republican Party supposedly stands for: American patriotism, strong military respect and consistent service to the American people.

Additionally, Trump did not go on his scheduled visit to the Aisne-Marne American Cemetery, a cemetery honoring American soldiers from World War I, in 2018 because everyone in the cemetery were “losers.”  These were individuals who fought for and died for our country. They deserve the utmost respect, especially from the leader of the country they served.

As individuals kneel and protest against police brutality, the Republican Party condemns them. Yet when their 2020 nominee audibly disrespects and slanders those who lost their lives to service for this country, they continue to back him, applaud him and ignore his overwhelming amount of iniquities and insults to those who serve and have served his country.

For a party that prides itself on a strong military and respecting American troops, I find it greatly hypocritical that they continue to support President Trump.

Captain Chesley Sullenberger, the pilot who saved the lives of 155 individuals when he landed his plane onto the Hudson River in 2009 said, “for the first time in American history, a president has repeatedly shown utter and vulgar contempt and disrespect for those who have served and died serving our country.”

Republican voters must use this knowledge, Trump’s lack of honor and Cindy McCain’s endorsement of Biden to further understand the importance of Nov. 3, not only for this country, but for those who have fallen in service. It is the responsibility of the American people to elect an official that represents and respects all individuals — members of the military, individuals who have died for this country and the American people as a whole.

Again, for a party that prides itself on militaristic respect and strength, it is quite hypocritical and ironic that they elect an individual who disregards the lives of fallen soldiers.

If Republican leaders and the Republican Party continue to support Trump, it will ultimately lead to their political demise, as Trump does not reflect their traditional values. He, unlike McCain, is far from an honorable man. It is time for Republicans to stand up to the leaders of their party. It is imperative for the democracy of this country.