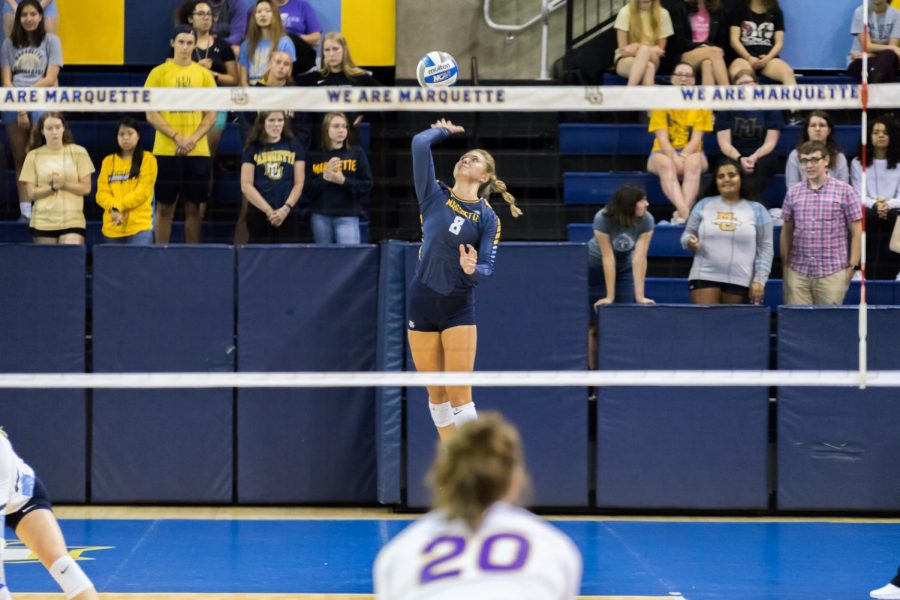 Hope Werch (8) serves the ball in a match against University of Northern Iowa last season.

To become a coach takes a lot of patience, a prestigious eye for the game and the confidence to challenge a team’s abilities.

These characteristics are exactly what Marquette volleyball head coach Ryan Theis uses to describe Hope Werch. Although the senior outside hitter only has one more season with the team, she wants to continue her volleyball career in a different way.

“I tried studying education, but I started thinking about coaching and realized that coaching would be something I want to do,” Werch said.

With her interest for coaching in mind, Theis said he has been putting Werch in coach-like situations.

“She wants to potentially be a volleyball coach, so we have tried to implement some things with her to prepare her for what that’s like,” Theis said. “Even watching a player, I will ask ‘What would you change with that kid?’”

Werch has helped out at volleyball camps as well, which she said has really helped her gain the necessary skills for coaching.

“It was a really good experience,” Werch said. “I would like to hopefully coach at the college level, specifically in the Midwest if I could. Coaching at Marquette would be really cool too.”

As for her own playing resume, she start playing in seventh grade. Theis said he had Werch on his recruitment radar early.

“She was probably the first scholarship I offered in getting this job in February of 2014. She was the first one (where) I said, ‘Lets get her,'” Theis said. “She has been an incredible part of the team.”

Prior to coming to Marquette, Werch found much success at Neenah High School.

“She was a state champion (and) pure leader of her high school team as a senior,” Theis said. “Her personality is terrific. She is super competitive and wants to win.”

Not only did she find success in high school, but also over the past three years with the Golden Eagles. In her debut season in 2017, she was named BIG EAST Freshman of the Year. Then during her junior season she was awarded AVCA All-East Coast Region.

“Being a part of the team has been really fun,” Werch said. “We are very supportive of each other and help push each other to become better.”

During Werch’s time at Marquette she has been a part of some monumental matchups on the court. She specifically remembers last season’s game against the University of Wisconsin-Madison, where Marquette upset the No. 4 team in the country after being down two sets.

“It was such a special moment,” Werch said. “It was so cool to see the NCAA Instagram page recording the reactions on the court. Coaches were hugging and the team was just so happy and excited.”

This story was written by Molly Gretzlock. She can be reached at molly.gretzlock@marquette.edu or on Twitter @mollygretzlock.