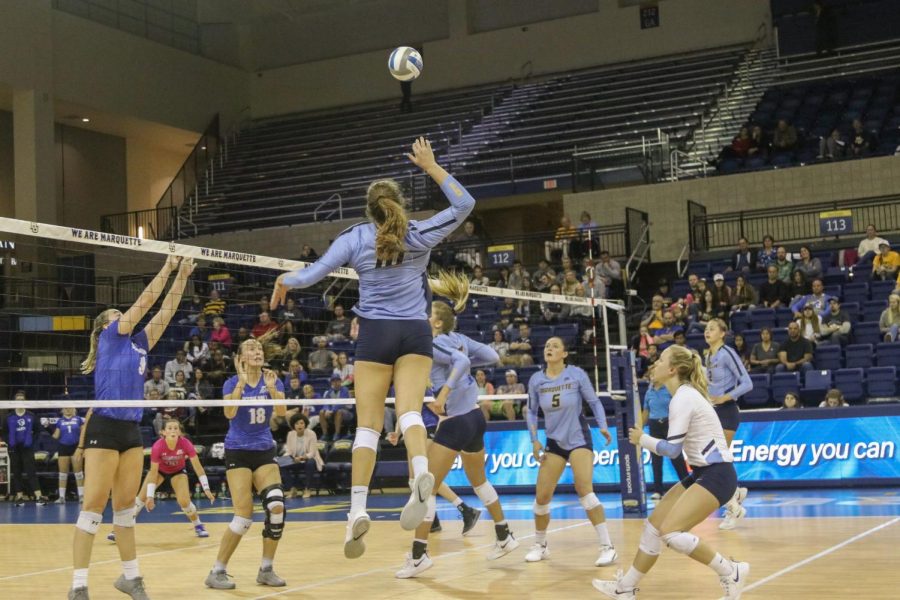 Allie Barber is the all-time leader in kills for the Marquette women's volleyball team.

Marquette women’s athletics is on an upward trend since sports became offered to women who wish to continue their athletic careers at a collegiate level.

Andrykowski was a part of the women’s basketball and volleyball teams from 1976 to 1980. She was captain of the volleyball team during the 1979 season and a four-time Wisconsin Women’s Athletic Conference player.

When her basketball career ended, she held three single-season scoring records in school history and to this day still holds the top three rebounding averages in a season. She was drafted into the Women’s Basketball League and also played professionally overseas.

Andrykowski left her mark on the athletics program as a woman and set the bar high for the women that would follow. Like Andrykowski, many Marquette alumni have gone on to play professionally or taken their talents to a coaching position. Some have even done both.

Katie Kelly, who graduated in 2008, is one of the female athletes that went down in history at Marquette for her defensive skills on the soccer field.

During her time with the Golden Eagles, not only was she able to set personal records, but she was also part of the team that played their first ever game in the BIG EAST Conference in 2005.

“Everything I wanted was all at Marquette,” Kelly says. “It had to do with the players on the team and it just felt really welcoming.”

In 2005, Kelly’s first season on the team, she was named BIG EAST Rookie of the Week early in the season after an assist against Northwestern. She was named to the Soccer Buzz Great Lakes All-Freshman Team and was a Freshman All-American honorable mention by Soccer Buzz.

“The first thing that comes to mind is preseason,” Kelly says. “Getting to know a bunch of new people and trying to play your best to earn a spot. We would go off campus and to a ‘summer camp’ where we were able to focus on us. You really just got thrown in and you just learn so much about yourself being put into such high end situations.”

As a young, dominant player, Kelly had her family and teammates to thank for her success.

“A lot has to be attributed to how I was raised with my family to never quit,” Kelly says. “My teammates kept me in check, because I was a freshman I knew I had to work hard. I also just had to trust in my coaches plans and have trust that they would play me.”

Kelly went on to finish her career tied as the third all-time leader in assists with 25, and she was also tied for third as the all-time leader in with 0.28 career assists per match. She started in 88 games, which was tied for second all-time, helping Marquette win 54 games during the 2005-08 seasons.

“The conference was able to push us in the right direction and challenge us,” Kelly says. “We were able to put down a good foundation and the talent was able to keep growing.”

After college, Kelly still wanted soccer to be a part of her life. She went overseas to play professionally for two seasons in Sweden. She was a part of the Kristianstads DFF for two years in Finland and one year in Germany. She says the process to get there was not the easiest, especially as female athlete.

“I did not realize how crazy I think I actually was,” Kelly says. “I had these goals, but most people didn’t think they were realistic. I knew I wanted to represent a national team. I was forced to look overseas. Until I started to pursue those goals I didn’t realize how difficult it was to be a woman and try to play professionally.”

“Now to be a coach in a male-dominated career, it makes me unbelievably exceptional. I remember the nights where I doubted, but it was such a privilege,” Kelly says. “It’s really been a fun experience to walk through years of playing, but also to help them with the next chapter of their life. That is the reason why I love coaching.”

Whether going professional in their sport, or getting inducted into the M Club Hall of Fame, women that have been athletes at Marquette all have their own unique story.

In the early 2000s, Brianna Dahm was one of the most decorated athletes in cross country and track & field history at Marquette. She earned athletic honors as well as academic honors in her career. She was a two-time NCAA All-American in the 3,000-meter steeplechase and was named to the Conference USA All-American Decade Team in 2005, which honors the top athletes from the BIG EAST Conference’s decade of existence.

“I had the honor to come to Marquette and run with a talented group of athletes,” Dahm says.

The Two Rivers, Wis. native earned Conference Athlete of the Year in 2002 and 2003, as well as six individual titles and one relay championship during her time at Marquette.

“I went to Oregon after I graduated from Marquette to train for the Olympics,” Dahm says. “Marquette gave me a good base and helped me move forward with my training.”

Besides having the opportunity to train for the Olympics, Dahm was inducted into the ‘M Club’ Hall of Fame in 2011, six years after she graduated. Her legacy remains in the Marquette record books at first all-time in the steeplechase, indoor 3,000-meter run and indoor distance medley relay. She ranks in the top five at Marquette in five individual events as well.

“Marquette is still a special place for my husband and I,” Dahm says. “My husband was an athlete at Marquette as well and we still live close to Marquette, so we try to come and support the athletics whenever we can.”

Aside from the prominent women that have been athletes on campus, female head coaches have been making their mark as well.

Meredith Black is the head coach of the Marquette women’s lacrosse team and has been the only head coach in program history since the lacrosse debut in 2012.

“It’s been great (to be a head coach),” Black says. “It has sort of been a dream, and watching Pat Summit growing up and seeing her as an iconic coach was cool because you didn’t see many (women head coaches) growing up, so when I got this job at 29 it was really cool and a way to power young women.”

Black graduated from Notre Dame in 2004. During her time in college she played women’s lacrosse as well. She was the school’s first student-athlete named to the Intercollegiate Women’s Lacrosse Coaches Association.

“When I was a senior on the team, my teammates said I would be really good at coaching,” Black says. “They said I was coaching them as their teammate. That moment hit me and made me realize that it was something I could do. It just came naturally to me.”

During Black’s eight seasons at Marquette, she has an overall winning record of 50-81. Aside from developing a strong connection on the field between the athletes, Black and the program set an example in the Milwaukee community. They spend many hours volunteering and raise funds to fight against pancreatic cancer.

“When athletes leave, I always tell them to never lose the connection with this program and teammates,” Black says. “The connection (they) built will never leave and will be one of the most impactful things to point to in their life.”

This story is written by Molly Gretzlock. She can be reached at Molly.gretzlock@marquette.edu or on Twitter @mollygretzlock.