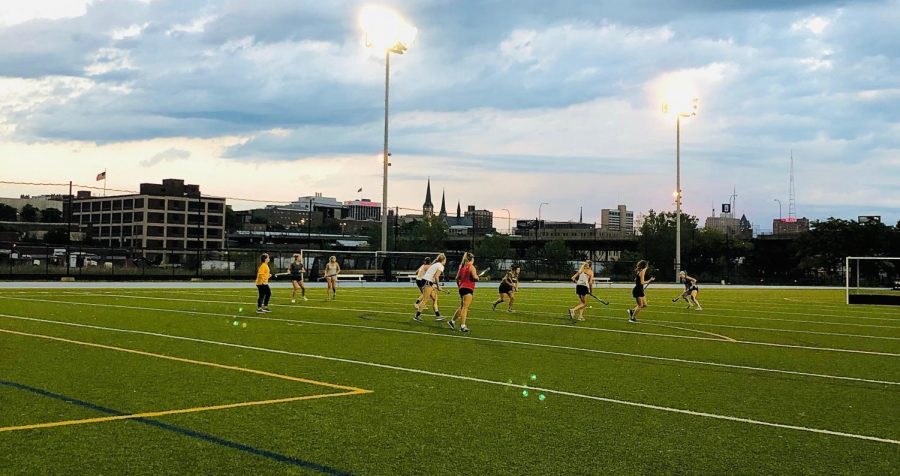 Marquette offers more than 40 club sports on campus. The most recent club additions are field hockey and gymnastics.

While some individuals who belong to club teams may tell you it is easy to join, starting a new club sport can be a lengthy and difficult process, according to individuals like Sydney Callero and Annie Stelter.

New individuals who wish to start a club first must go through the Department of Recreational Sports and complete the club sport application process.

There are six steps to complete, but they are not always easy to complete, according to some recent club creators like Callero and Stelter.

A history of the sport (background, players needed, etc.)
A list of at least 20 Marquette University students (with MU ID numbers). At least half of these students need to be freshman or sophomores.
Facility of field/space needs (practice and games).
Provide a detailed budget of the club’s first three years of operation. This budget should include all expenses and revenues.
Provide a list of colleges/univerities within 300 miles of Milwaukee that offer this sport as a club program.
Does this sport have a governing body (association, etc.)?

According to the application process, the group’s proposal must include a general history of the sport wanting to be added.

Recently, the gymnastics club was created this past year, so a history of the sport was needed to be looked into by the creators. This included research on the background of gymnastics.

For newly created club sports, the names of younger students need to be listed as part of the application process.

“They have to give me the IDs for at least 20 Marquette students (and) at least half of them have to be freshmen or sophomores,” Anderegg said. “If it’s a bunch of seniors, we just want continuity so we can keep the club going for more than one or two years.”

Callero, a senior in the College of Arts & Sciences and creator of the gymnastics club, said figuring out practice space was challenging when they were first getting started.

“We had to figure out how we would be paying for practice space and vehicle transportation because (Department of Recreational Sports) said they couldn’t help us with finding a practice space, nor could they let us practice on campus,” Callero said. “They also said if we practiced at an outside facility, we would need to provide our own insurance because that’s what gyms were requiring for us.”

The club creators were also required to provide a detailed budget log for the club’s three years of operation, including all expenses and revenues.

Stelter, a senior in the College of Business Administration and creator of the field hockey club team, which had its first season in 2019, had similar thoughts as Callero in regards to the budget sheet.

“We had to figure out what each tournament would cost by contacting other universities, so it was a very intense process with making a budget for three years in advance,” Stelter said. “Seeing how much each semester would be, all of that included. It’s doing an estimate for the second two years, but the first year needed to be very specific.”

However, once the process is completed, there are a few steps that are left.

The process usually takes about three months, Anderegg said, although Callero said it has taken a bit longer for her vision to be created.

“We started the club process in February and it would’ve gone a lot faster, but because of COVID, things slowed down a lot and we didn’t have much communication with the directors of the department,” Callero said.

Even after the club is created, the group must go through the process of becoming a student organization. The club creators must complete the “Student Organization Request to Organize” form and gather electronic signatures of interested students. They also need to meet with the Office of Engagement and Inclusion where they have to create an organization constitution.

In the constitution, Callero said they needed to include things like: mission statement, structure/membership, exectuvie board and positions, eligibility, nominations and election of the executive board, meetings and voting, removal of executive board members, finances, amendments, affiliations and ratifications.

Callero expressed her frustration with the student organization process as well.

“We found out we had to present in front of a different board that we thought we’d already presented in front of with a different set of information,” Callero said. “I also wish they would’ve been a little more helpful or had somebody to help us get through this process. It’s so hard to get your club approved so that way clubs don’t start. It seems like they don’t want clubs to be started because of how hard the process is.”

For all the steps and the several months of work, Callero said it was absolutely worth it.

“If (COVID-19) never happened and we were able to practice, this is so worth it. Especially being able to bring a club that I care about to the school,” Callero said. “I felt Marquette didn’t have a lot of clubs and I wanted to make friends, but it wasn’t easy and this is a club where I can finally meet friends who have the same interest. I thought that was so worth it to do all of this.”