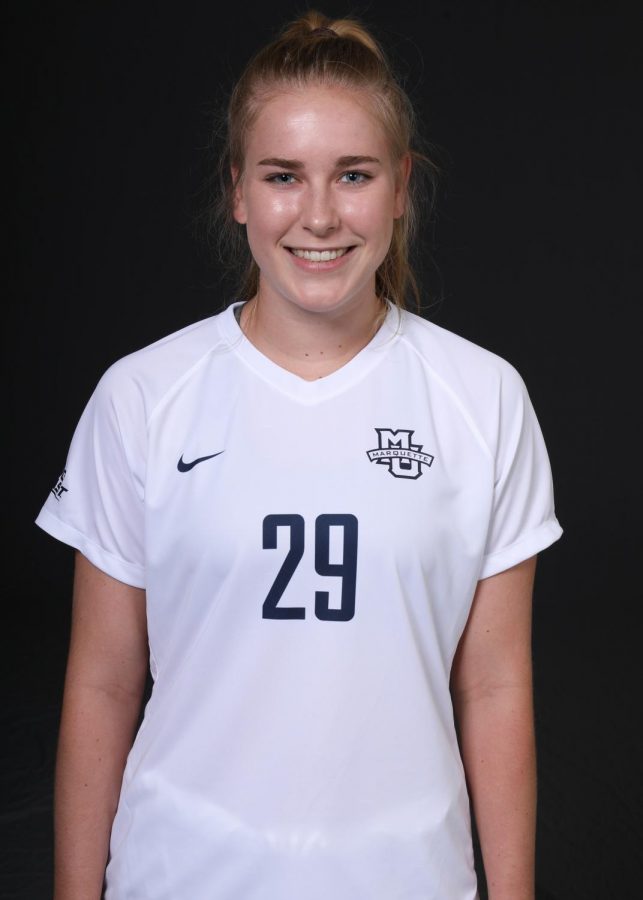 Defender Katie Smith is looking forward to taking the field for the Golden Eagles after spending last season on the sidelines (Photo courtesy of Marquette Athletics.)

When Katie Smith arrived at Marquette last year, she immediately saw an opportunity she had to take advantage of.

“Coming into last season, I wasn’t exactly sure how the redshirting process was going to go and if I was going to decide to go that route or not,” Smith said. “I just felt like it was the best decision for me as a freshman to get acclimated to the style of play, and just the college environment overall.”

Smith mentioned she was a little more timid and quiet compared to her teammates due to the transition from high school to college.

Assistant coach Steve Bode said the jump from high school to college athletics can be challenging for athletes. He said if an athlete can take a redshirt year, the result of doing so will be seen down the road.

“If you can take a redshirt year, it certainly helps,” Bode said. “It’s just more time at the end of the day to be able to adjust and adapt to the demands of college and the balance of school and soccer in high-level BIG EAST soccer.”

During one’s redshirt season, an athlete is allowed to still participate in team practices and continue to receive their scholarship, but instead of traveling with the team on the road for away games, the athlete remains on campus.

As a center back on the backline herself, Smith said she learned a little bit from everyone, but two in particular stood out: Maddy Henry and Bri Jaeger.

“When I would practice and Maddy (Henry) was in goal, she would instruct me, ‘Oh you should do this instead of this,’ or, ‘Communicate a little louder or step a little quicker,’” Smith said. “I really took those into consideration and started implementing those into my game.”

The aggressiveness and presence that Jaeger brought to the field was something that Smith admired as well.

The Phoenix, Arizona native said that watching the games from the sidelines served as a big part of her learning process last season.

“It was awesome to be on the outside looking in a little bit just because you see how the girls on the field work together, the team chemistry and things like, ‘Oh I see players doing this on the field, that’s something I want to make sure I’m doing in practice and eventually when I get into games as well,” Smith said.

Following a 6-11-1 season last year, Smith was ready to put the knowledge and lessons she learned during the fall campaign into action with the Golden Eagles and their new coaching staff.

Smith said when COVID-19 hit and sent everyone home, it felt like a setback.

“It was very frustrating because I thought individually, I felt in the spring, I was really progressing, really getting out of my comfort zone a little bit, getting more comfortable on the field,” Smith said.

Being back in Arizona, Smith had some advantages that some of her teammates might not have had — nice weather and workout equipment — as they began to do their offseason training individually.

Smith said her workout routine for the first few weeks of summer consisted of home workouts Emily Jacobson, assistant strength and conditioning coach, had sent out since gyms were closed.

“Since the weather was so nice, I would go on bike rides and go on runs in the morning or any time of the day,” Smith said. “I did do a little bit of small group training once COVID limitations were lifted, as I did some 3v3 and some technical work with a previous coach I had in high school.”

Bode said staying fit and getting work in on their own was a big challenge amongst the entire team during the six months away. With the team back together now, he said it is evident that Smith was dedicated to doing just that.

“What is very clear is that she was working hard on her own to stay up with her fitness levels and make sure she wasn’t falling behind,” Bode said. “She’s put herself in a position that it’s not just physically getting back in shape, she already is in shape so let’s get back her sharpness, and then we can build off of that.”

“From my interactions with her so far, I really appreciate her honesty,” Bode said. “I think she’s a person that has very high character and high integrity. I (also) would say her work ethic, both on the field and off the field are tremendous.”

Bode said in the short time he has worked with Smith on the field, it has been great.

“She’s been great to coach and very coachable as well. She wants to learn,” Bode said. “That’s a coach’s dream. You want players that really want to learn.”

As the first full-team practice took place Wednesday, Sept. 23 in the Valley, Smith mentioned that having two opening spots on the back has motivated her thus far in practices.

“That’s just a big motivation for me when I’m tired in practice, it’s like, ‘Okay this is where you prove to yourself that you belong on the starting and backline,’” Smith said. “I know there’s a lot of good competition for the backline, so I’m looking forward to seeing what I can prove to myself, the coaches and my teammates.”

The BIG EAST All-Academic Honoree said looking toward the future has also been motivating as she tries to find a way into the starting 11 or a significant bench role.

“You only get to play in college soccer for four years of your life, so I just want to make the most of it and part of that is getting onto the field, getting in those high-intensity games,” Smith said. “Just envisioning myself out on the field I think is also a big thing for me.”

Bode said Smith possesses one of the mentalities that head coach Frank Pelaez, assistant coach Erin Scott and himself are trying to instill within the entire program.

“She’s very team-oriented. One of the things we’re trying to instill in the culture as we continue to grow and build the women’s soccer program at Marquette is this team-first mentality,” Bode said. “Katie seems to really have adopted that and we really appreciate that about her.”

Off the field, Smith spends time on TikTok. Sophomore defender Addie Shock, one of Smith’s roommates, said Smith is on TikTok whenever she is not studying.

“Whenever she’s not studying, she’s literally on TikTok,” Shock said. “It’s actually kind of funny. I’ll be doing work in the living room and you just hear Katie hysterically laughing at her TikTok on her phone.”

For Smith, the popular social media platform is a form of escape from things going on around her.

“It is just a good way to kind of pass the time, get my mind off of things if school is stressful,” Smith said. “There’s a lot of funny videos on there. There are some cooking videos on there that I like. I found some recipes to try on there. It’s just a fun social media platform.”