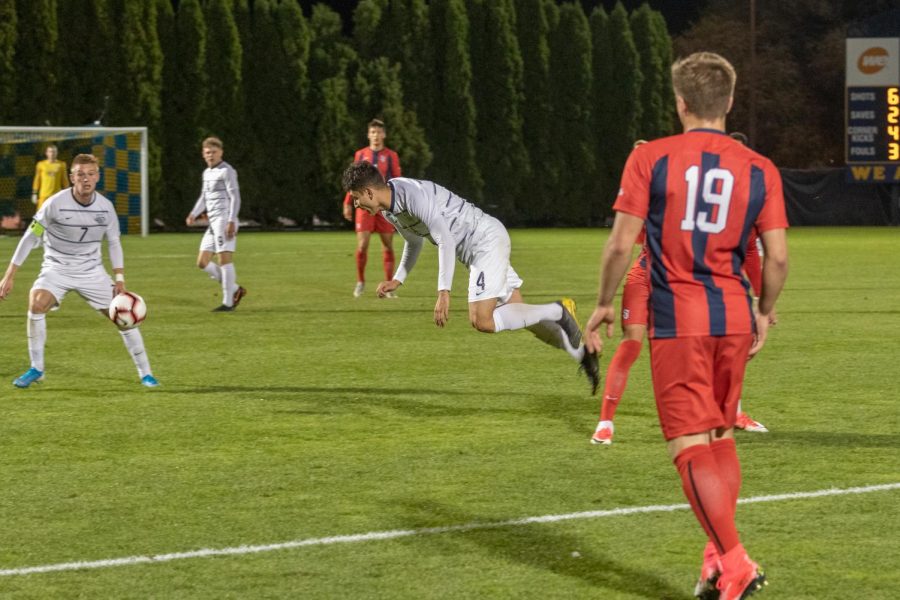 Midfielder Christian Albelo (4) makes a play on the ball in a match last season against St. John's.

If home is where the heart is, redshirt junior midfielder Christian Albelo’s heart is in more than one place.

Born in Fayetteville, North Carolina, Albelo grew up in a military family, which allowed him to play youth soccer and attend high school in Germany. Since he was always on the move, he had to adapt quickly to his new surroundings both on and off the field.

“I think, if anything, that kind of almost made me who I am today,” Albelo said. “It’s helped me with my coachability and also it’s just given me a lot of lifetime experiences that I wouldn’t really trade in for the world.”

Even though he started playing with these teams when he was just a teenager, he was able to take away valuable lessons that prepared him for his future.

Albelo said the biggest thing he learned was how to be professional at a “really, really young age.” He holds himself to a high standard, giving 100% all the time and always trying to improve.

The knowledge he took from Germany carried over to Kansas City, Kansas, where he signed with the Swope Park Rangers on an amateur contract in 2016. Despite not appearing in a match for the club, Albelo was surrounded by players that were either fresh out of college or that had gone through the professional ranks.

“Every day I would come and I’d learn something new from players that had been MVPs of the league, players that had been in the league for a long time, had played in MLS and come back down to the USL (and) so I thought it was always a learning experience,” Albelo said. “I always tried to take away a little bit out of every training session from some of the older guys, and they were always there to help us.”

With the resume he built in both the United States and abroad, Albelo was a highly-ranked recruit, sitting as high as No. 17 in the nation according to Top Drawer Soccer. Even as a top-20 recruit, he tried to focus on his ranking as little as possible.

“At the end of the day, it’s just a number. You can’t let the number hold itself over you, you can’t let it be you,” Albelo said. “It can really affect you in a negative way if you let it. I didn’t try to let it do that, I just wanted to play … For me personally, the number didn’t really mean anything.”

Albelo played in nine matches, starting in four as a first-year in 2017 before redshirting in 2018. Redshirting was never on his agenda, but a broken foot in the summer heading into his sophomore season changed his plans. While sidelined, he used his time to get in the right place physically.

“Although sometimes people don’t necessarily look at it as a positive, I think it has a lot of positives that you can take out of it,” Albelo said. “I thought it helped me take a step back and really elevate certain parts of my game that I didn’t think I was super great in.”

With certain aspects of his game tuned up for his redshirt sophomore season, Albelo was able to play in nine games, tallying 359 minutes on the pitch. Due to his exposure to various programs in the past, he has also shared his knowledge with other midfielders on the team.

“I think Christian brings pretty good experience in general,” junior midfielder Alan Salmeron said. “He’s played in some pretty good clubs before he got here and I think that experience shows when we’re on the field.”

In addition to Albelo’s talent showing on the field, he has shown glimpses of some hidden talents.

“We do a little ritual thing where we sing on the bus, and everyone was caught off guard when he actually had a decent voice,” Salmeron said. “So that was kind of funny.”

For players who are new to the men’s soccer team, like junior transfer Zyan Andrade, Albelo has been able to help them get accustomed to the program.

With two years of college eligibility left, Albelo has high hopes for what is to come for the Golden Eagles.

“We want to win a BIG EAST Championship, we want to compete for national championships (and) get as far as possible,” Albelo said. “We play in a great league and we get tested (in terms of challenges on the field) everyday, so I feel like there’s no real reason why we couldn’t go that far.”

As for long-term goals, Albelo is taking things one season at a time.

“Right now I’m just focusing on the present, just trying to continue to get better on a day-to-day basis (and) continue to work on things that I need to work on,” Albelo said. “When it’s all said and done, I’ll validate my options and see what I can do. Obviously the goal has always been to be a professional and get back to that level, so obviously I work everyday to try and get back to that.”