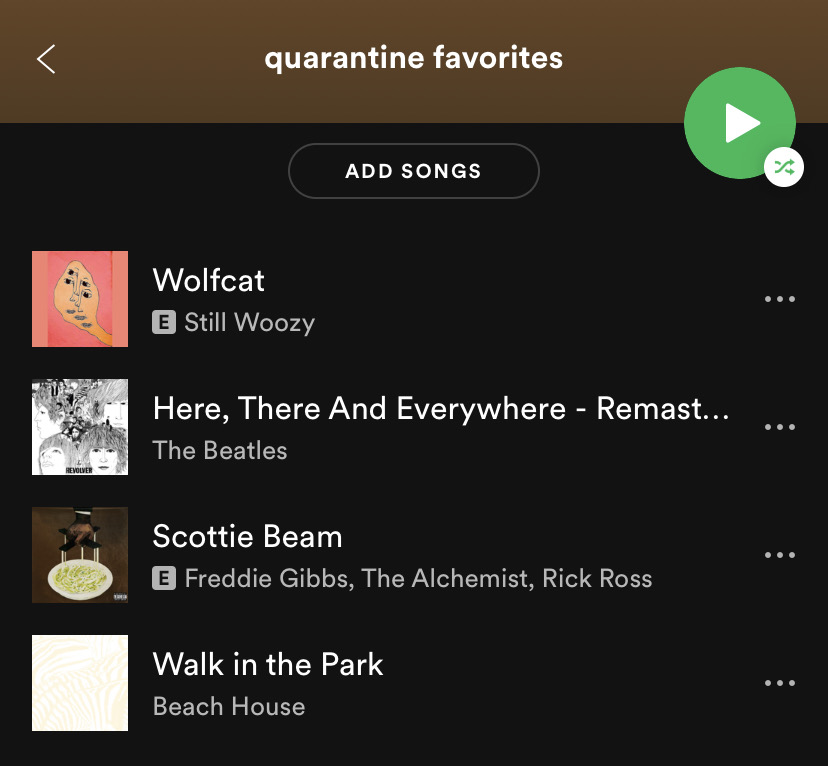 Favorites include songs from Still Woozy, The Beatles and Beach House.

Ah, quarantine. It was decent for a couple of weeks and then those weeks turned into months, and right before we knew it, the fall semester was upon us. How did people pass the time? Perhaps by squeezing a month’s worth of TikTok content into one night? Or maybe by trekking down to the local Target and purchasing a forest’s worth of toilet paper? Who’s to say? Not me. I actually think back on my quarantine experience very fondly, even though I’m pretty sure the sun didn’t touch my skin for at least three consecutive months.

“Wolfcat” by Still Woozy is a song I remember listening to as a senior in high school, and I think of the song very fondly. I had completely forgotten about the song until it came on shuffle while I was doing homework back when online classes were starting up. I am glad that I rediscovered it, because I listened to it countless times over quarantine.

Still Woozy, also known as Sven Gamsky seems to be longing for an old friend or lover in this song and sings about how he would do anything for this person. I honestly do not relate to these lyrics at all, but I love it because it is a super catchy song and has an awesome upbeat indie style to it.

Woozy is easily one of my favorite artists because he is super talented, and he really seems like such a likeable guy with how he interacts and engages with fans during his concerts. He remixed Tame Impala’s “The Less I Know The Better” on Instagram during quarantine which also kept me very entertained. I highly recommend Still Woozy to anyone looking for new artists to get into.

Here, There And Everywhere – The Beatles

Yes, the Beatles. Perhaps the most famous band of all time. I never really listened to them until my roommate showed me a lot of their songs last year, and I continued listening to them constantly during my time in quarantine.

“Here, There And Everywhere” is one of the most calming, soothing songs I have ever listened to. There are nearly no instruments being played besides  some guitar and the drums, but the lack of instrumentation is made up for by the incredible harmonizing occurring in the background. It is rumored that this song was written almost immediately after the Beatles had attended a listening party for legendary album “Pet Sounds” by the Beach Boys.

One of my favorite parts about this song is that singer Frank Ocean actually sampled a small part of it on his song “White Ferrari” from his 2016 album, “Blonde.” I am a massive Frank Ocean fan, so that made the song way cooler for me to listen to.

Rapper Freddie Gibbs dropped his album “Alfredo” at the end of May just as the extremely rigorous lockdown was ending just as the rigorous lockdown was ending in Illinois, which is why I look back on it with fond memories. Gibbs and legendary producer The Alchemist combined to make a very smooth and enjoyable 10-song masterpiece that I had a tough time trying to get away from.

It was hard to pick one song, but I chose “Scottie Beam” because he features rapper Rick Ross in the song, and he finishes off the beat so well that it was hard to exclude. Another notable feature on the album is Tyler, The Creator on “Something to Rap About,” which is also a masterpiece of a song.

I had never listened to Freddie Gibbs before quarantine, but I am so happy that I started to because I now listen to him almost every day. I definitely recommend “Alfredo” to anyone who has not listened to it yet and likes good rap music.

Walk in the Park – Beach House

There was one specific quarantine night in late April where I decided to dive into “Teen Dream,” a Beach House album that I had only known for including “Silver Soul,” a song sampled on rapper Kendrick Lamar’s “Money Trees.”

I had a tough time choosing a song off this album because I enjoyed so many of the songs upon my first listen. In the end, I chose “Walk in the Park” because the band really puts their talent on display in the chorus when lead singer Victoria Legrand belts out a series of glorious notes, and Alex Scally annihilates the guitar alongside the vocals. It is truly one of the best songs I have heard, and I thank quarantine for giving me the opportunity to listen to more of this extremely talented duo.

I have listened to a couple of Beach House’s other albums since, but I am still having a tough time getting away from “Teen Dream,” so I highly recommend “Walk in the Park” and Beach House to anyone who has not listened to them.