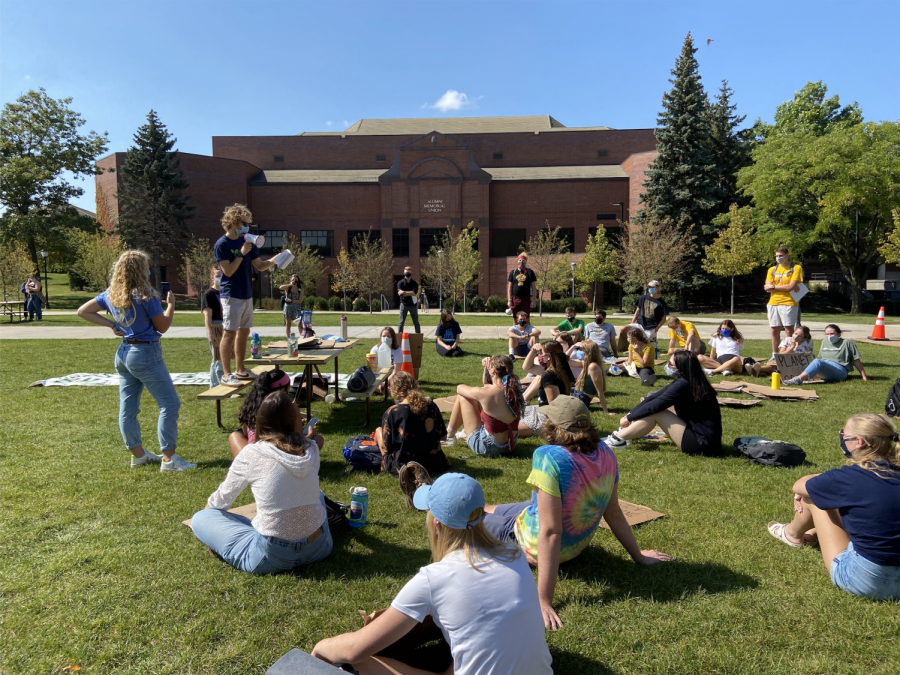 Fossil Free Marquette organized a demonstration calling for the university to divest from fossil fuels in front of the Alumni Memorial Union Sept. 25, a Global Day of Climate Action.

At the protest, they emphasized three demands: transparency of the use of funds, that the university obtain student input on the issue of divestment, and to announce a five-year plan to diverge from fossil fuels.

Linnea Stanton, a senior in the College of Arts & Sciences, addressed the crowd, emphasizing that climate change disproportionately affect communities of color and low-income communities.

“I spend too much damn money at this university for them to be using it to kill people and to be polluting our planet and actively destroying the communities that they serve,” Stanton said.

Fossil Free Marquette is a student organization that promotes climate justice by advocating for environmentally-responsible investing, according to its Instagram page.

There were approximately 40 student participants, making signs and writing chalk messages on the sidewalk emphasizing their requests. Xavier Cole, vice president for student affairs, also made an appearance.

Joseph Miscimarra, a senior in the College of Arts & Sciences and co-founder of Fossil Free Marquette, said the university is currently invested in fossil fuels, both directly and indirectly. He said students should be outraged not only for moral reasons, but financial reasons as well.

“These companies are not only the primary contributors of carbon dioxide into our atmosphere, but they also fund climate disinformation campaigns,” Miscimarra said. “The climate crisis affects mainly Indigenous communities and communities of color.”

Miscimarra said he feels it is unethical that Marquette is supporting such companies.

Miscimarra said the point of the protest was to gather students to show the university students care about and deserve to know how their tuition money is being invested.

“By showing up here today, we hope that Marquette sees us and they realize that students care about (its) unethical investments,” Miscimarra said. “Marquette, if they don’t divest soon, are going to be on the wrong side of history.”

Maddie Kuehn, a sophomore in the College of Arts & Sciences and co-leader of FFM, said the organization wants the university to see that students care about its investments in fossil fuels.

“It’s so important for students to voice their opinions and voice their concerns to the university because that’s how a lot of real change happens within smaller communities,” Kuehn said.

The Vatican urged Catholics June 18 to disinvest from the fossil fuel industry and to pay attention to companies who may be damaging the environment, according to Reuters.

“The fact that Marquette hasn’t even acknowledged what Pope Francis says shows that they either don’t know that this is a huge deal, or they don’t care enough about it,” Miscimarra said.

“When you are investing in a company and in corporations that affect … (those) outside of the Marquette community, I feel like it’s very contradictory,” Kuehn said.

Kuehn said that since the creation of the organization in fall 2019, they have been unable to hold a student referendum or speak with the Board of Trustees or administration, although Miscimarra spoke with the university’s chief investment officer, Sean Gissal.

Eric Rorholm, a senior in the College of Arts & Sciences and chair of the Marquette College Democrats, also spoke at the event.

“This November we can do way more than talk about climate change,” Rorholm said.

Kuehn said that FFM hope they get the attention of the Board of Trustees and that they are able to speak to groups on campus like Marquette University Student Government.