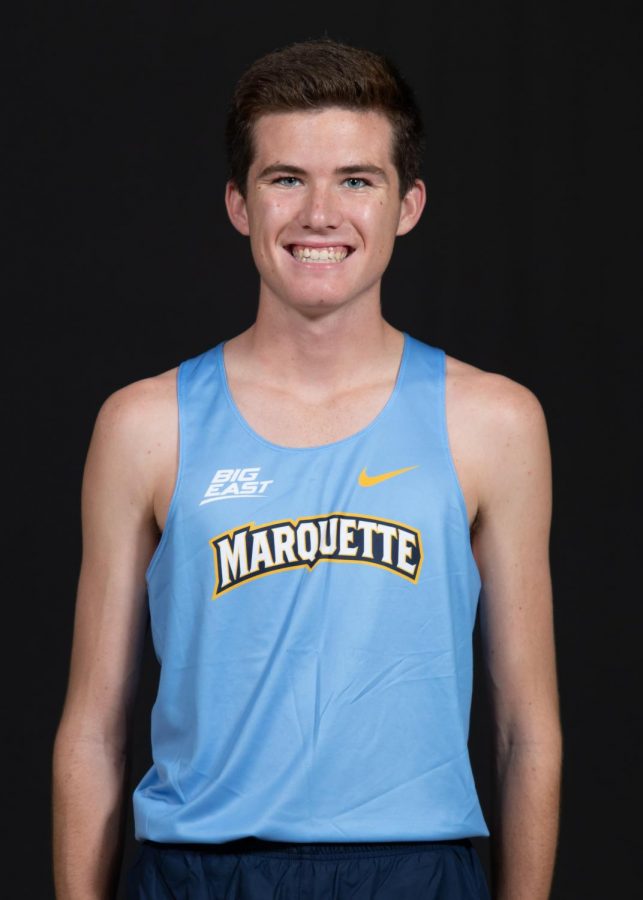 Thomas Leonard is a first-year cross country runner from Chicago. He led his cross country team to qualify for the 2017 state championships as a sophomore. (Photo courtesy of Marquette Athletics.)

Growing up with family ties at Marquette made it a no-brainer for first-year Thomas Leonard to attend the university. However, it was the help from his older sister MaryClare that influenced him to not only follow his family’s footsteps, but also run at the college level.

Leonard, a three-time individual state qualifier in cross country, always had Marquette on his mind as a potential option.

With his mom and a few other relatives being Marquette alumni, along with a great biomedical engineering program, the Marist High School graduate knew Marquette was the perfect fit for him.

Born in a south suburb of Chicago called Palos Heights, the short distance from home also played a factor in Leonard’s decision to attend the four-year university.

“I just wanted to stay somewhere semi-close to home and Marquette offers that for me,” Leonard said. “I’ve had a lot of family come through Marquette, which helped make my decision easier, and I really liked Marquette’s biomedical engineering program … After talking to coach (Sean) Birren, I knew I was making the right choice.”

Leonard was an Academic All-State honorable mention in 2020 in addition to being named the East Suburban Catholic Conference Scholar Athlete of the Year in 2018 and 2020.

“Thomas had very good times coming out of high school and was a solid athlete, which was a big factor in his recruiting process to Marquette,” Marquette head coach Sean Birren said. “He’s a kid who wants to train hard and get better every day, which makes him fit in just right here.”

Leonard’s older sister MaryClare is now in her fourth and final season for the Notre Dame University cross country team, where she has been a great role model for her younger brother as well as an important runner for the Fighting Irish.

“She’s been a great influence for me and she was very helpful when it came toward my decision to run at the college level,” Leonard said. “She’s also given me a lot of great advice on how to balance my schoolwork and running at the same time, so she’s been very supportive of me so far and I can’t thank her enough for that.”

After hearing about his first season at Marquette being postponed due to the COVID-19 pandemic, Leonard was disappointed. Despite the circumstances, he still has been trying to stay positive throughout this time.

“Obviously I was upset about our season being postponed, but I’m going to use this time to get to know my teammates better and connect with my team before we can hopefully start racing again,” Leonard said. “We’ve been training in small groups so far which has helped me meet some of my teammates, so I’m just trying to stay positive about the whole situation.”

With the initial setback, Leonard is still excited for his future at Marquette and ready to start his college running career.

“I’m really looking forward to racing with my teammates and just getting better every day,” Leonard said. “We have a lot of great guys on the team and I love to be pushed by my teammates to make me become a better runner.”

Although Leonard will have to wait a little longer for his collegiate debut, his head coach is excited to see what the future holds for the first-year.

“I believe there’s no limit for him,” Birren said. “I think he could be our number one runner by the time he leaves Marquette if he trains hard and puts in the work for it.”